SEOUL -- Since taking office in February 2013, South Korean President Park Geun-hye has made unilateral decisions on a number of divisive issues. Despite a continued decline in her approval ratings, her decisiveness has helped recover popular support in recent months.

However, her rigid adherence to her own principles has invited a wave of criticisms from opposition lawmakers, further widening divisions in South Korean society.

The upcoming general elections in April will likely serve as a litmus test for Park's political performance. 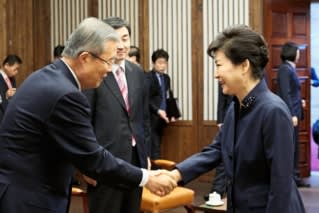 Kim Jong-in, left, was once a close policy aide to South Korean President Park Geun-hye but defected to the largest opposition party, the Minjoo Party of Korea. He drew up her campaign pledge, called economic democratization, back in 2012 when she was running for the presidency.

On Feb. 16, Park met with Kim Jong-in, chairman of the emergency committee for the Minjoo Party of Korea, in a room in South Korea's National Assembly before she was to deliver a speech. Kim asked her to explain her sudden decision to suspend operations at the jointly-run Kaesong industrial complex in North Korea. "You made the decision suddenly. So you need to explain the reasons in detail," he was quoted as telling her.

He is currently head of the largest opposition party, but Kim once served as one of Park's top policy aides in her presidential campaign back in 2012. He formulated what he calls economic democratization -- a campaign pledge aimed at revamping the country's economic structure, which focuses heavily on big conglomerates -- and contributed to her election victory.

But later, they disagreed on economic policies, and Kim defected from ruling party. In a meeting with owners of small and midsize businesses on Feb. 21, Kim criticized Park for favoring large companies just as in the past, adding that "this will make it impossible [to implement economic democratization]."

In recent months, Park has made decisions on a number of important issues, ranging from a government-mandated history textbook and an agreement on the wartime "comfort women" issue with Japan to the closing of the Kaesong industrial complex. Even though these are all highly contentious issues, she does not appear to have made enough efforts to coordinate opinions among relevant parties beforehand. The opposition camp has countered her moves, saying she made the decisions unilaterally.

In a parliamentary session on Tuesday, the Minjoo Party members engaged in a filibuster in a bid to block the passage of an anti-terrorism bill proposed by the government and the ruling Saenuri Party. One female lawmaker made a speech that lasted for more than 10 hours, raising concerns that the bill could be used to monitor individuals critical of the government.

Even so, Park remains unfazed. "We can't tell where terrorist attacks will occur. Under such circumstances, we can't have strong economic development," she argued.

In November last year, labor unions organized a large anti-government protest rally in central Seoul. Park compared those masked demonstrators to the radical terrorist group Islamic State, saying that "IS does a similar thing." She demonstrated her stance to crack down on masked demonstrators who turned violent.

Such adamant behavior has fueled backlash from her political opponents and has at times estranged even her own supporters.

Even so, her support rate has remained resilient. It dropped to the 20% level in January last year, but it has rebounded to the lower 40% level in the latest opinion polls, due in large part to her firm stance on North Korea.

Many previous South Korean presidents gradually became lame ducks in their fourth year. But Park has built a strong support base among voters aged 60 and older who experienced the rule of her late father and former President Park Chung-hee.

The next presidential election is scheduled for December 2017, with less than two years to go. United Nations Secretary-General Ban Ki-moon is widely rumored to be considering a run for the top job and replace Park. Ban aside, there are no strong contenders among opposition parties at the moment, which is in her favor. 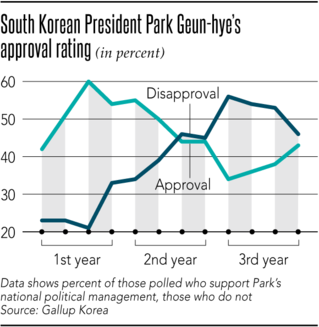 Still, she faces a host of serious challenges at home. As of August last year, South Korean non-regular workers totaled 6.271 million, the highest level on record. The country's jobless rate dipped 0.1 percentage point on the year to 3.7% in January. Nevertheless, the youth unemployment rate for people aged 15-29 stood at 9.5%, up 0.3 percentage points from a year earlier. This indicates that the gap is widening further between the haves and the have-nots.

Last month, the People's Party was formed and its co-Chairman Ahn Cheol-soo lashed out at the Park administration for failing to narrow the income disparity. "We will fight against all forms of unreasonable gaps between the rich and the poor, men and women, and different generations as well as different corporations," he said.

South Korea's ruling and opposition parties have only about two months to go before the general elections scheduled for April 13. The elections will be a report card for the Park administration over the past three years and also serve as a gauge of whether she can keep her hold on power in her fourth year and beyond.