TOKYO -- The "Pokemon Go" smartphone game craze and Chinese President Xi Jinping's unprecedented reorganization of the Chinese military have a peculiar relationship that could greatly affect the world in terms of U.S.-China relations and internal politics in China.

Xi has since last year announced a series of bold measures to reorganize the Chinese military. Under the reforms, the four general headquarters of the People's Liberation Army have been disbanded and reorganized into 15 units directly controlled by the Central Military Commission. China has also reorganized its 7 military regions into five "combat zones." 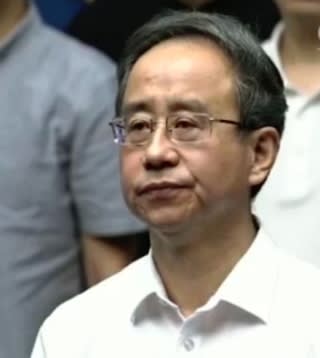 Ling Jihua, a former head of the Communist Party's General Office, was sentenced to life imprisonment for corruption in July.

In addition, China has stripped the army of special privileges and placed it in an equal position with the navy and air force, as well as with the newly created rocket force and the strategic support force.

While Xi has achieved the unprecedented reforms in less than four years since taking office, the reasons for the surprisingly fast military reorganization -- which took place over the army's fierce opposition -- have been little known.

A conspiracy by disgraced former presidential aide Ling Jihua and his younger brother, Ling Wancheng, contributed to the military reforms, a senior member of the Communist Party of China said. Ling Jihua, a former head of the Communist Party's General Office and a close aide to Xi's predecessor Hu Jintao, was sentenced to life imprisonment for corruption in July.

Xi met Hu in Beidaihe, a coastal resort town in Hebei Province, in the summer of 2014 and showed him hard evidence that Ling Jihua had brought confidential information to the U.S. through his brother, who is now hiding there. The envisioned conspiracy involved Ling Wancheng providing confidential information, copied in more than 2,000 files, to the U.S. government for bargaining with China if Ling Jihua should fall into a precarious position.

Hu could not refute the evidence, paving the way for the conviction of Ling Jihua, who was officially placed under investigation by the Communist Party's anti-graft organ at the end of 2014.

Hu, Ling and incumbent Premier Li Keqiang's power base is the Communist Youth League of China, the gateway to success in the Communist Party, with almost 9,000 members. Hu once positioned Ling as a candidate to succeed Xi. Li, also a close aide to Hu, lost to Xi at the final stage of competition for the presidency of China and settled for the No. 2 job as premier.

Hu was eager to produce Xi's successor from his faction. But Ling's climb up the promotion ladder ended in the summer of 2012 when former President Jiang Zemin revealed that Ling had covered up an accident that year in which Ling's son was killed while driving a Ferrari.

Speculation is rampant about the confidential information Ling is said to have brought out of China through his brother, such as detailed positions of Chinese missiles aimed at the U.S., security conditions at the Communist Party's central headquarters in Beijing, Xi's problems with women, and the Xi family's financial and other scandals.

If the U.S. government were to obtain all of the information, it would know all facts from inside the Communist Party and the Chinese government, including how Xi beat out Li for the country's top job.

The U.S. remains silent about the information. U.S. government officials seem to have received information from Ling Jihua but keep their mouths shut or refuse to say anything about it if asked, according diplomats and other sources in Washington.

If the U.S. has obtained key information on the Chinese military, China cannot engage in warfare with the U.S. at all. If that is the case, Xi must have trouble sleeping at night.

Among the secrets believed to have been leaked to the U.S. is information regarding the BeiDou satellite navigation system, developed by China.

For example, the BeiDou system is responsible for navigating Chinese coast guard vessels, which entered Japanese territorial waters around the disputed Senkaku Islands in Nagasaki Prefecture, and connected areas of the East China Sea, in August along with 230 fishing vessels. The system would also help Chinese ships navigate and instruct them of attack targets during emergencies involving Taiwan and the South China Sea.

China plans to offer high-precision global navigation services via more than 35 satellites, starting in 2020. It will become a formidable rival of the U.S.-run GPS navigation system, even for consumer use.

China has fully changed the BeiDou system on the assumption that information about it has leaked to the U.S., an international intelligence source said, adding that the costs must have been enormous.

Charges against Ling Jihua, announced on July 4, included illegal acquisition of national secrets, a crime punishable by death. But the ruling against him was inarticulate for two possible reasons, people familiar with the case said.

Xi either concluded a behind-the-scenes deal with the Ling brothers to prevent the leak of key information, or else the information brought out by them included nothing of significance, they said.

It's clearly the case that Xi carried out bold reforms of the Chinese military, assuming that confidential information was leaked to the U.S., so as to forestall actual damage from the leakage. As no one can defy orders from Xi at a time when the U.S. and China may clash militarily over the South China Sea issue, the reorganization of the military, personnel reshuffling and changes in the information system were promptly implemented.

In short, Xi capitalized on the information leak to accelerate the reorganization of the military. He also appointed as many as 23 supreme military commanders. As players in power struggles in China take advantage of disadvantageous positions to check their rivals, everything is used for fighting behind the scenes.

"Pokemon Go" is a conspiracy between Japan and the U.S. to undermine the BeiDou system, Chinese national security officials say in earnest. Using GPS, the game makes it possible to draw maps and take photos of restricted areas and identify the locations of missiles by positioning game characters in various places across China, they say.

The claim suggests China may plan to probe military facilities around the world by releasing a Chinese version of "Pokemon Go" that will use the BeiDou system. If China realizes a "military that can fight" through Xi's reforms, the military balance between the U.S. and China may be affected.

The BeiDou system is designed to challenge the GPS system, the core of the "Pokemon Go" game. The leaking of confidential information by the Ling brothers has helped Xi reinforce his power base and revealed an aspect of confrontation between the U.S. and China.