BANGKOK -- Prime Minister Prayuth Chan-ocha offered assurances on Friday that his unelected military government is putting Southeast Asia's second largest economy back on a track, and said that a controversial new constitution is essential to restoring stability. 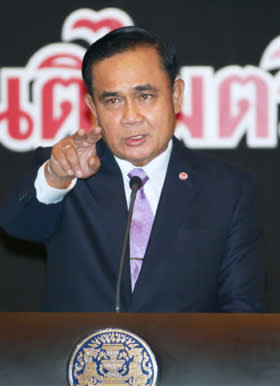 Prime Minister Prayuth Chan-ocha called a press conference at Government House on April 17 to report on developments since his coup d'etat on May 22. (Photo by Ken Kobayashi)

Reporters were invited to Government House to hear Prayuth and members of his cabinet give an account of their performance since an interim government was established in September following a coup d'etat on May 22.

"The economic situation is already recovering," said Prayuth during a 90-minute speech, outlining his government's efforts to help farmers and stimulate small and medium enterprises.

Although gross domestic product growth in 2014 overall was only 0.7% -- the worst performance in three years and actually negative in the first quarter -- Prayuth said quarterly figures are improving and reached 2.3% year on year in the final quarter.

Pridiyathorn Devakula, the deputy prime minister responsible for economic affairs, told the Nikkei Asia Review that growth could recover to 4% in the current quarter. For the full year, the Bank of Thailand is forecasting 3.8%.

Major government investment projects are expected to play a role. Bidding for a China-backed railway line running from Nong Khai near Laos to Map Ta Put, a deep water port on the Eastern Seaboard of the Gulf of Thailand, will take place in the second half of the year.

Some 56 billion baht ($1.75 million) has been earmarked for road and water infrastructure development this year, with projects beginning in May.

Analysts remain cautious, however. The military government has been promising infrastructure spending for many months, but no major project has yet been launched.

"Thailand's bureaucratic system is lengthy but the junta's apparent attempt to avoid corruption is making it much longer," a Bangkok-based economist told the Nikkei Asian Review, but asked not be identified.

The new constitution is due to be reviewed by the military-appointed National Reform Council from April 20 to 26, and is also stirring concern.

The first draft presented on Friday includes articles that critics say set back Thailand's democratic development, and could revive political tensions that will hinder economic recovery.

The new electoral system proposed for the lower house owes something to Germany's system and is intended to make it more difficult for a single party to exert majority power.

Some see this as an attempt to curb the influence of former Prime Minister Thaksin Shinawatra, whose parties have strong rural backing and have won every general election under different banners since 2001.

Also, under the new proposals, more than half the 200-member senate will be unelected. The number of elected senators, one from each province, will be 77.

The Pheu Thai Party led by Yingluck Shinawatra, Thaksin's youngest sister, won the 2011 election outright but eventually ran into trouble over political amnesties and a controversial rice subsidy scheme. The coup followed months of anti-government protests on the streets of Bangkok and a failed general election.

"Do you want to go back to the same place?" Prayuth asked on Friday, referring to the chronic political unrest of the past decade. "If you don't, then the constitution must have the changes."