Rebel with a cause

KUALA LUMPUR -- He has never sought glory, monetary gain or revenge. Standing on the dais at the end of the massive Bersih 4.0 rally (bersih means clean in terms of elections and corruption), Hishamuddin Rais hardly looked like the chief organizer of this and many years of similar protests, a widely-published writer and inspiration to several generations of radical youth. With his trademark broad smile, black goatee, ponytail, crumpled cap and clam-digger pants barely hiding his knees, he could have been mistaken for an artist or street performer, rather than the oft-imprisoned dissident described at one ruling party summit as "public enemy No. 1." 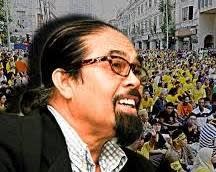 Yet when former Prime Minister Mohamed Mahathir, now 90, showed up unexpectedly to wade through the crowds calling for the ouster of his scandal-tainted successor, Najib Razak, Rais had to admit, "For me, this was a moment of personal triumph."