YANGON -- Myanmar's Nov. 8 election is likely to be dominated by the ruling Union Solidarity and Development Party and the opposition National League for Democracy led by Aung San Suu Kyi. But about 90 other parties are also vying to win seats in the country's first free and fair election in a quarter century. A canvasser for the USDP distributes leaflets to residents in downtown Yangon. (Photo by Simon Roughneen)

Confronted with the wealth, reach and popularity of the big two, this array of smaller parties faces a struggle to win seats -- a challenge compounded by Myanmar's first-past-the-post electoral system, a legacy of colonial rule.

"The two big parties are overwhelming the smaller parties," said Khin Maung Kyi, an official with the United Democratic Party.

"They can use so many finances," he added, pointing to the gaping disparity in resources between his party, which is fielding a mere 41 candidates in the election, and the 1,000-plus being fielded by both the NLD and USDP.

The USDP is the biggest party in Myanmar's legislature, having predictably won a landslide in the 2010 election, which was held under military rule and was boycotted by the NLD. But the USDP is "unlikely" to retain its dominance after Nov. 8, according to ousted former party chair and parliamentary speaker Shwe Mann, who is nonetheless standing for the USDP and still clearly harbors hopes of becoming president in 2016.

The likely winner is the opposition NLD, which swept Myanmar's last fair election, in 1990, only to be denied power by the junta, which abruptly overturned the results. Leader and current member of parliament Suu Kyi was kept under house arrest for 15 of the following 20 years until her eventual release in 2010, a week after the election was held that year.

Suu Kyi's popularity is now key to the NLD's hopes of winning enough seats to, in turn, secure the presidency for its nominee, as well as to form a government which would see her become the de facto leader. She is barred from directly seeking the presidency due to a constitutional provision that disqualifies nationals with foreign spouses or children. Suu Kyi had two children with her late husband, a British academic. The NLD, which is running more candidates than the incumbent USDP, sees the proliferation of smaller contenders as "part of democracy," according to party elder Nyan Win, a lawyer who served as Suu Kyi's spokesman during her house arrest.

But the NLD does not see the smaller parties as making an impact, much less as serious rivals for seats. "The USDP is the main opposition to us," Nyan Win told the Nikkei Asian Review.

But in Yangon's crowded Hlaing Tharyar constituency, site of some of the city's biggest factories, Kaung Myint Htut, a candidate for the Myanmar National Congress, is hopeful of at least denting the vote machines of the big two parties.

"People are confused about who to vote for; there are 14 other contestants for the seat I am contesting," he said.

That is nearly three times as many candidates as the five the MNC is fielding in total, but Kaung Myint Htut is hopeful of an upset and winning himself a seat in Myanmar's upper house of parliament.

"The USDP is not very popular in this constituency, and though the other parties have money for leaflets, for promotion, you cannot just hand out leaflets if you want to get votes," he said, while backing away from explaining his campaigning tactics. 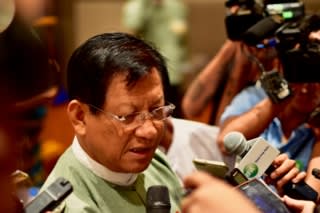 Sai Ye Kyaw Swar Myint, executive director of the People's Alliance for Credible Elections, said that while Myanmar's winner-takes-all election will suit bigger parties, there is a chance for smaller parties to work the system to their advantage. "As [this is] a constituency-based system, the smaller parties can have a chance if they can connect directly with the voters in their area," he said.

Under the current electoral system, unless a party wins the highest number of votes in any constituency, it will not have representation in parliament. The party that wins the most votes will take all the seats in the constituency, meaning that even if smaller ones like the UDP were to win a percentage of votes, they will not have a proportional number of seats in parliament. Moves in 2013 by smaller parties to change the electoral system to proportional representation were met with fierce resistance by the NLD, and by larger ethnic parties.

In this election, the UDP's Khin Maung Kyi reckoned that 50% of his party's candidates can win seats. But history shows that winning votes does not translate into seats. In 1990, the first-past-the-post system saw the NLD win over 80% of the seats with 60% of the vote. That year, the regime-backed National Unity Party's 20% popular vote translated into just 2% of seats.

"First-past-the-post is always a disadvantage, not only for smaller parties but for bigger parties too," said Sai Ye Kyaw Swar Myint, whose organization will deploy over 2,000 observers to around 1,000 polling stations on election day. This is more than any of the higher-profile international observation missions such as those run by the European Union and the Carter Center.

The presence of foreign observers should help ensure a free and fair election -- and has been touted as one reason some smaller parties are not so concerned about widespread complaints about the government-backed national election commission.

For the MNC's Kaung Myint Htut, the commission's failings -- such as the much-derided voter list that was missing names and that disallowed up to four million people, mostly living overseas, from voting -- are a legacy of Myanmar's half-century of opaque and often incompetent military rule.

"The UEC is doing its best from the ruins of Myanmar. The voter list could not be exact," he said.

The Carter Center reported on Oct. 28 that the voter list remained a matter of widespread public criticism, but added that "many of the specific allegations about errors appear to be unsubstantiated."

The center also reiterated concerns about the disenfranchisement of around 1 million Rohingya Muslims, a stateless minority living mostly in western Myanmar's Rakhine state. The minority group is subject to harsh discrimination by the Myanmar government, which refuses to recognize the Rohingya as an ethnic group.

"In 2010, we could vote and run for parliament," said Myo Thant, information secretary for the Democracy and Human Rights Party, referring to the irony that the Rohingya had greater electoral rights under the military than under the current civilian government.

"We are running three candidates, two in Yangon and one in Rakhine," said Myo Thant. The party had sought to field 18 candidates, but 15 were told by the election commission that they were not eligible to run, as their parents, the commission contended, were not Myanmar citizens.

Not only the Rohingya are likely to go unrepresented when Myanmar's post-election legislature sits for the first time early next year. The country's estimated 4-5 million Muslims will probably have little or no representation in parliament after the upcoming election, as opposed to a handful now, with the NLD refusing to field candidates from a religious minority that makes up perhaps 10% of the country's population.

There have been several bouts of brutal anti-Muslim violence across Myanmar in recent years, while anti-Muslim Buddhist monks have also risen in prominence, increasingly shaping public debate and driving legislation on inter-faith issues. Myanmar held a census in April 2014, but data on religion and ethnicity is being withheld until after the election.

"As far as I know, there are no more than 20 Muslim candidates running in the whole country," Myo Thant said.