Sunflower Movement resonates a year on

TAIPEI -- When hundreds of Taiwanese students invaded the national legislature and occupied the parliamentary floor on the night of March 18, 2014, to protest against President Ma Ying-jeou's China-friendly policies, few foresaw that it would cause a fundamental shift in the island's politics and its ties with Beijing. 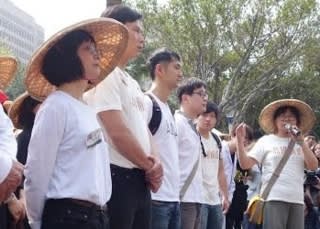 Taiwanese activists gathered in front of the legislature on the anniversary of the Sunflower Movement to demand changes in referendum and election laws to increase the public's direct involvement in politics.

The weeks-long rally, dubbed the Sunflower Movement, ended on April 7, but its impact continues to be felt in Taiwanese society. Over the past year, support for Taiwan independence returned with a vengeance, thanks in part to the slogan for the popular movement, "You have to save your own country yourself". Cross-straits talks stalled and Ma's Nationalist Party suffered a major election drubbing that has significantly undermined his chances of winning the 2016 presidential poll.

"The movement highlighted the Taiwanese public's resentment toward the fact that only a privileged few were benefiting from cross-straits exchanges and ordinary people had not benefited from the improving ties," said Wu.

Wu's sentiment was echoed by Penny Chen, a college student studying diplomacy at National Chengchi University. Chen attended the Sunflower rallies and was glued to local social media sites for updates at the height of the movement.

Coming from a relatively well-off family, Chen said she had not been particularly bothered about politics before the movement. However, she joined the rally to fight for a better future for her generation after seeing how some of her college peers have had to work to make ends meet.

"The rent and living expenses put great pressure on the young, and many young Taiwanese simply feel lost about their future," she said. "Even if they are quite capable, they are not earning a deserving salary."

Indeed, according to official government statistics, Taiwan's average real monthly salary in 2014 was 45,494 New Taiwan dollars ($1442), lower than the 1999 level. Overall economic growth has been tepid too, Taiwan's gross domestic product rose just 3.74% in 2014, compared with China's GDP growth of 7.4% in the same period.

Since Ma took office in 2008, he has signed 21 pacts with China, but many now say the agreements only benefit big conglomerates but hurt Taiwan's small businesses and the middle class while further undermining Taiwan's sovereignty. China continues to claim Taiwan as part of its territory even though the two sides split amid a civil war in 1949.

The increased ties with China seem to drive the Taiwanese further away. A February poll of 1,001 people by Taiwan Indicators Survey Research showed 51.3% of Taiwanese support the island's independence, compared to 47.8% a year ago.

But activists are not content with just cutting ties with China. They are clamoring for even more political reform. Lin Fei-fan, who became a household name overnight as one of the movement's leaders, said that activists must continue to push for public supervision of cross-straits negotiations and Taiwan's continuing democratization.

"Maybe what we can do is not just reminiscing about last year, but keep reforming," Lin wrote on his Facebook page on the eve of the anniversary.