BANGKOK -- Ever since Thailand's May 2014 coup, the military-run government has been promising to lead the country's sluggish economy out of the doldrums with a flurry of long-overdue investments in public infrastructure.

For two years, the private sector has held its collective breath, patiently awaiting an infrastructure-led boom. But projects have been slow to materialize. Some have been delayed by financing problems, including a much-vaunted scheme for a high-speed rail link from Nong Khai on Thailand's northern border with Laos to Mab Ta Phut, an industrial estate and deep sea port in Rayong province, southeast of Bangkok, which was originally expected to be fully backed by China. Others have failed to make rapid progress because of delays in Thailand's notoriously lethargic bureaucracy, not least because of the government's big anti-corruption campaign that is said by insiders to have removed the "usual incentives" for getting things done.

The waiting may be over soon, however. "If you are talking about tangibility, in the second half of this year Bangkok will be full of construction and people will start complaining about the traffic," Thai Transport Minister Arkhom Termpittayapaisith told the Nikkei Asian Review.

Most of the construction will be extensions to Bangkok's mass transit network, comprising the 34.45km overhead Bangkok Transit System, called the Skytrain, and a 20km underground mass rapid transit system, officially named the Bangkok Expressway and Metro PCL, but often called the Blue Line.

"The extension of the Blue Line is under construction and the East Orange Line we hope will begin later this year, so the area around Ratchadaphisek Road [in central Bangkok] will be affected," said Arkhom. The East Orange Line is one of several new lines planned to extend the MRT system.

For Thailand, temporary traffic congestion caused by infrastructure building would be good news. It would mean that the government is visibly investing in Thailand's future, an activity that has arguably been on hold for the past decade or so amid political upheavals and populist policies. Thailand's annual rate of public investment now stands at less than 5% of gross domestic product, compared with neighboring Malaysia's 11%, according to Siam Commercial Bank (SCB) estimates.

For years the lack of infrastructure building did not seem to matter. Thailand's Eastern Seaboard development project, launched in the 1980s, has become the hub for most of the country's export-oriented industries. More than 100km southeast of Bangkok, the industrial corridor has appeared impervious to political shenanigans in the capital. Export shipments flowed smoothly through Laem Chabang port at the height of street protests by yellow and red shirt demonstrators in Bangkok between 2008 and 2010, and again in 2013 and 2014.

But exports have slowed dramatically over the past two years, and Thailand needs to look elsewhere for growth. GDP is growing relatively slowly -- by an annual 2.8% in 2015, 0.8% in 2014 and 2.7% in 2013, according to the Bank of Thailand -- and the country's export engine is sputtering.

Exports fell by 9% in 2014 and 10.9% in 2015, according to the central bank, undermined by slow demand growth in traditional markets and a worrying decline in the competitiveness of Thai industries, economists say. Compounding those concerns, exports continued to slow in the first five months of 2016, falling 1.9% from a year ago, according to the Commerce Ministry.

Recovery remains uncertain. Although GDP in the first quarter grew at 3.2% from a year ago, there were signs in April of a slowdown in consumer spending, private investment and tourism, sending mixed signals for the second quarter.

Amid this uncertainty, many economists suggest that now would be a good time for the government's long-promised infrastructure plans to kick in.

"Sentiment is key," said Nalin Chutchotitham, chief economist in Thailand for the Hongkong and Shanghai Banking Corporation. Nalin believes that both foreign investors and the Thai private sector have plans to expand but are waiting for a further pickup in domestic demand, fearing a relapse into slower growth.

"If they see that the momentum is being maintained there [in infrastructure building] then I think they will be more confident and move forward with their investment plans," she said. "Once they see the public investment being done, we will probably see private investment coming through." 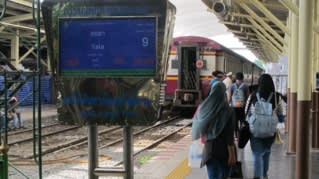 Much of that new private sector investment is expected to go into real estate, specifically along the planned mass transit and railway lines. The supply of condominiums along the Skytrain line, which opened in November 1999, has quadrupled over the past 16 years, while retail outlets amount to 18 shops per square kilometer compared with eight elsewhere in the capital, according to SCB estimates.

New transport infrastructure also provides big savings in the form of time that no longer has to be wasted sitting in Bangkok traffic -- a key cause of complaints from foreigners about doing business in Thailand. "If the foreigners didn't complain about traffic in Bangkok, we would not have built the mass transit [network]," said Arkhom, who headed the National Economic and Social Development Board before joining the current government.

Satisfying traffic-weary foreign tourists and investors is also part of the current spending plan. "If you don't build the infrastructure then no one will come," Arkhom said. New mass transit lines (labeled Orange, Yellow and Pink) are among 20 infrastructure projects included in a fast-track plan that envisages initial construction before a general election scheduled for mid-2017.

To overcome bureaucratic opposition, Thai Prime Minister Prayuth Chan-ocha has pushed some priority projects through without the vetting usually required. He has done this by using Article 44, which gives him unchecked power under the military-backed interim constitution. For example, environmental impact assessments are being done in parallel with design and bidding for the projects, although they would theoretically be scrapped if the assessments are negative.

Arkhom said that 11 of the fast-tracked projects, worth 460 billion baht ($13.1 billion), have already received cabinet approval. Some, such as two dual-track rail links to connect Laem Chabang Port with northeast Thailand's two main cities, Nakorn Ratchasima and Khon Kaen, are already under construction.

The dual-track railways are designed to cut freight costs on commodities and goods from the northeast while also boosting "connectivity" with Thailand's neighbors, Laos and Cambodia. Transportation costs between Vientiane and Laem Chabang are among the highest in the region.

Laying rail links to the northeast, which is both the most populous region and the most impoverished, has previously been endorsed by the country's two largest political parties -- Pheu Thai and the Democrat Party -- providing some security against cancellation by any future elected government.

"I think significantly investing in the rail network is an absolute necessity to improve our logistics and reduce our logistics costs," said Korn Chatikavanij, former finance minister in a Democrat-led coalition government from 2008 to 2011. Railways currently account for only 2% of Thailand's goods transport, although rail freight costs are about half the cost of road transport per ton.

Economic spinoffs from the northeast rail link could include new train depots and warehouses, increased foreign direct investment, real estate development in regional centers, and a boost in trade with Cambodia, Laos, Myanmar and Vietnam, which account for about 10% of Thai exports, exceeding shipments to Europe.

The dual-rail tracks, designed more for freight than passengers, might make more economic sense than all the mass transit projects planned in Bangkok. In addition, while the Bangkok projects may boost confidence in the economy, they risk bolstering an overheating condominium market, which is already raising concerns at the Bank of Thailand.

"We see increasing investments in real estate, in condominiums. The prices are going up but if you look at the buildings some are empty," Veerathai Santiprabhob, the central bank, warned at a recent forum.

Thailand's mass transit systems have had a checkered record of profitability. The Skytrain, which runs through central Bangkok, only started to make a profit after seven years of operation, and may recover its investment by the end of its 30-year concession, according to Sumet Ongkittikul, transportation and logistics research director at Thailand Development Research Institute, a think tank.

The Skytrain is privately owned, but the MRT is publicly owned and privately operated, which means that the government must bear some of its losses. Most of the new lines are planned as public-private partnerships, but given their dubious profit potential the government may end up bearing most of the risks. Two high-speed rail projects expected to be approved by the cabinet soon, one linking Bangkok to the southeastern industrial coastal town of Rayong, and the other connecting the capital to the southwestern beach resort of Hua Hin, will also be under the government's public-private partnership scheme. Some critics say high-speed trains, which depend on passenger usage rather than freight, might have trouble making profits in Thailand where good roads and low-cost domestic flights abound.

"The model of using the private sector and recovering the investment through a fair price and real estate development, that seems to be fair, but if the government has to subsidize it, that is not fair," Sumet said. "If you invest billions of dollars in mass transit for Bangkok, how about the people in Chiang Mai and Phuket and Khon Kaen?"

Another big question for future rail projects is the competence of the State Railway of Thailand, the state-owned enterprise that operates the loss-making railway link between Suvarnabhumi Airport and central Bangkok, and which is building a long-delayed Red Line in northern Bangkok.

The SRT will have responsibility for six dual-track lines planned nationwide, and would be involved in the proposed fast-speed train links from Bangkok to Rayong, Hua Hin, Nong Khai and Chiang Mai, although of which are expected to encounter delays.

"The SRT is the most strategically important state enterprise, given our transportation plans, and the most underperforming of all state enterprises in terms of management capacity," Korn said. The SRT's debt is estimated at 90 billion to 100 billion baht ($2.6 to $2.8 billion.)

The government is working on plans to transfer the SRT's debt elsewhere and break up its operations into separate entities that might be paired off with private sector concerns as joint ventures. However, with many of the current fast-tracked rail projects scheduled to become operational within three years, the reforms are becoming urgent.

"It seems the SRT is not capable of doing business," Sumet said. "To do this you need to reform it, but the government does not seem to think this is a priority. From my point of view, it is. In three years' time, once the dual-track is completed, then the problems will occur."