BANGKOK -- After breaking his two-year Twitter silence three weeks ago, Thaksin Shinawatra, Thailand's self-exiled former prime minister, tweeted again on Tuesday to remind everyone of the lack of democracy in Thailand under military rule.

"I am, and will always be, concerned about the livelihood of my fellow Thai citizens," he said in a tweet marking the anniversary of the military coup that toppled his elected government on Sept. 19, 2006.

"I hope the memory of what happened 11 years ago has not faded from the hearts of the Thai people," he said. 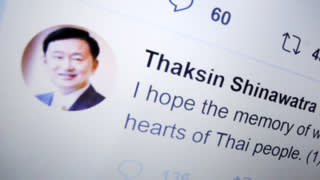 The 2006 coup was followed by another in 2014, which brought down the caretaker government of his younger sister, Yingluck, who had already been removed from office by court order.

Thaksin tweeted last month in English and Thai, but only in English this time. There were numerous responses from apparent supporters, many of whom benefited from his populist policies.

"Thanks to Thaksin for making people aware of the value of democracy," said one. "You are the leader who leads us in action and thoughts," said another.

Last month, Thaksin quoted the French philosopher Charles de Montesquieu to take a swipe at the military government, which has assumed sweeping powers, rewritten the constitution, and suppressed public debate.

"Montesquieu once said 'There is no crueler tyranny than that which is perpetuated under the shield of law and in the name of justice'," he tweeted.

Thaksin's latest jibe comes just a week ahead of the postponed Yingluck verdict in the Supreme Court. She has been charged with negligence in the oversight of a controversial rice-pledging scheme.

The ruling was originally due to be handed down on Aug. 25, and carried a possible prison sentence of up to 10 years. Yingluck did not turn up at the court, and her whereabouts remain unknown. She is thought to have fled the country, possibly to Dubai where Thaksin mainly resides.

Yingluck has forfeited her bail, and a new arrest warrant has been issued. The Supreme Court said the rescheduled verdict will be read in absentia if necessary.