HONG KONG -- A common misconception about last year's Umbrella Movement in Hong Kong is that it ended when the police cleared the last protest site on Dec. 11. In reality, the most radical anti-government campaign since the 1967 leftist riots continues -- even though the seas of tents that occupied Admiralty, Mongkok and Causeway Bay for two-and-a-half months are long gone. 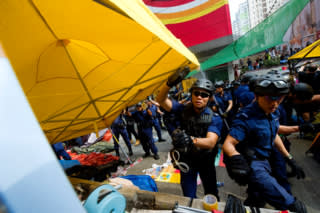 Artists -- both professionals and amateurs -- are among those who have resolutely refused to abide by the government's call for people to accept the electoral reform package that is on the table. The proposal gives eligible citizens a vote in the next chief executive election but not a direct say in the nomination process as demanded by the protesters.

The past month has seen exhibitions and film showings of works made during the mass sit-in -- long days and nights on the streets that gave rise to an outpouring of creativity, usually featuring yellow umbrellas. Umbrellas were first used as protection against police pepper spray but soon turned into the movement's icon, alongside yellow ribbons.

Visual art, cartoons and videos lampooning the authorities are being presented in galleries and online.

Scraping away the surface

Ivy Ma is a Hong Kong artist who has a solo exhibition of new pieces inspired by the protests. Local politics were never part of her artistic vocabulary. She spent the last few years working on the themes of history and memory, usually by turning her gaze to past, international tragedies such as the atomic bombing of Hiroshima and the "Killing Fields" in Cambodia. And then the protests happened. She initially went along with her students from the Hong Kong Art School when they responded to a territorywide school boycott as part of the civil disobedience campaign. "I went because there wasn't any point in me being at school anyway," she said. Later, she came to sympathize with the movement and started spending time at the protests on her own. Soon, an idea formed for her next art project.

The results, now hanging in a commercial gallery, are slightly eerie. Ma made black-and-white prints of the head-and-shoulders photographs she took of dozens of student protesters and methodically scrubbed off the top layer of emulsion, so that the images appear blurred. They look like faded archival photos yet the facial features and expressions are still visible.

Ma said the protests made her look closer to home for material and forced her to consider what it means to be a Hong Konger -- an identity many consider distinct from Chinese, and one that has touched a nerve with the central government in Beijing ever since the former British colony returned to its control in 1997.

Wen Yau, a pseudonym meaning "in a trance," is a performance artist. Photos and props used in her work are featured in an exhibition at Lingnan University on art produced during the Umbrella Movement. She was also a core member of a group that salvaged protest art before the police clearance, preserving pieces for posterity.

Despite her active participation in the movement, she cautions against romanticizing the street occupation.

"An artist would just be taking advantage if she labels her work 'protest art,'" she said. "I don't want yellow umbrellas and banners with 'I want true universal suffrage' near my exhibits. These have become cliches and symbols anyway. You can fall into the trap of nostalgia and look back at those weeks on the street as utopian."

A raging campaign for a number of university student unions to quit the Federation of Students -- a core group behind the protests, and one that has drawn accusations of being both tyrannical and too moderate -- is a reminder that the movement is filled as much by internal conflict as idealism. Amid the often bad-tempered dispute, many are thankful that an online army of cartoonists and filmmakers is providing plenty of comic relief.

A Facebook community called "AlexLester4everLove" was set up during the protests and continues to feed 34,978 fans with endless photo captions and original comics based on a fantasy love affair between two prominent student leaders, Alex Chow Yong-kang and Lester Shum. Many fans identify themselves as fujoshi, the Japanese term denoting women who adore anime featuring pretty, young gay male characters. These two (straight) men are not the only subjects of a lighthearted same-sex pairing. Joshua Wong, the most famous of the student leaders, is the love interest of fellow activist Oscar Lai on the "Joshcar" Facebook page. It boasts several thousand fans, though probably not Wong's father, who heads an anti-gay rights group in Hong Kong.

Edgier humor is supplied by Mocking Jer. This is a group of Hong Kong Academy for Performing Arts graduates who have put their acting, singing and film production skills to use on YouTube.

The group's name is an amalgam of the anti-establishment symbol in the "Hunger Games" and the Cantonese slang for male genitals. Its irreverent Facebook page has more than 25,000 followers. Mocking Jer's short films feature characters such as the historic "Three Kingdom" brotherhood of Liu Bei, Guan Yu and Zhang Fei, who happen to bump into Jesus as they revisit the former protest site in Mongkok.

Ho Cheuk-tin, one of the founders, said he wanted to keep up the momentum of the Umbrella Movement.

"We plan to make at least one or two short films a month and, eventually, a series of 10-minute episodes. If we can find commercial backing, we'd love to make a feature film," the freelance filmmaker said. Current productions are so low-budget that financing isn't a real issue, he explained.

Ho, who has worked in the mainstream film industry both in Hong Kong and mainland China, laments the lack of independence among local filmmakers and TV script writers who shy away from real-life issues for fear of offending the authorities.

"I grew up watching Michael Hui Koon-man's comedies making fun of corrupt police officers," he said. "Today, nobody would make a film about how the police treated protesters brutally."

Humor aside, Mocking Jer has been accused of stirring animosity toward mainland Chinese visitors in Hong Kong. One of its most popular YouTube hits, a remake of a 1990s Cantopop song, encourages people to join the Gauwu Movement. Named after the word for shopping used on the mainland, the movement was launched after the street clearance; protesters storm retail outlets popular with the visitors, whose rising numbers have alarmed many local citizens. These protests feature xenophobic rants against all things mainland and often turn violent.

Ho denied the group was driven by hate but said his work experience on the mainland convinced him of a vast cultural divide between Hong Kong and its motherland, more than 17 years after the city's handover.

A determination to stop Hong Kong from turning into another mainland Chinese city, where civil liberties such as freedom of expression are absent, is shared by all these artists. They believe these rights are being encroached on, and that they will only be protected if the people of Hong Kong have a say over who gets to run in future chief executive elections.

"I don't believe we can kill the monster in one knockout," Wen Yau said, "but we'll just have to keep at it."