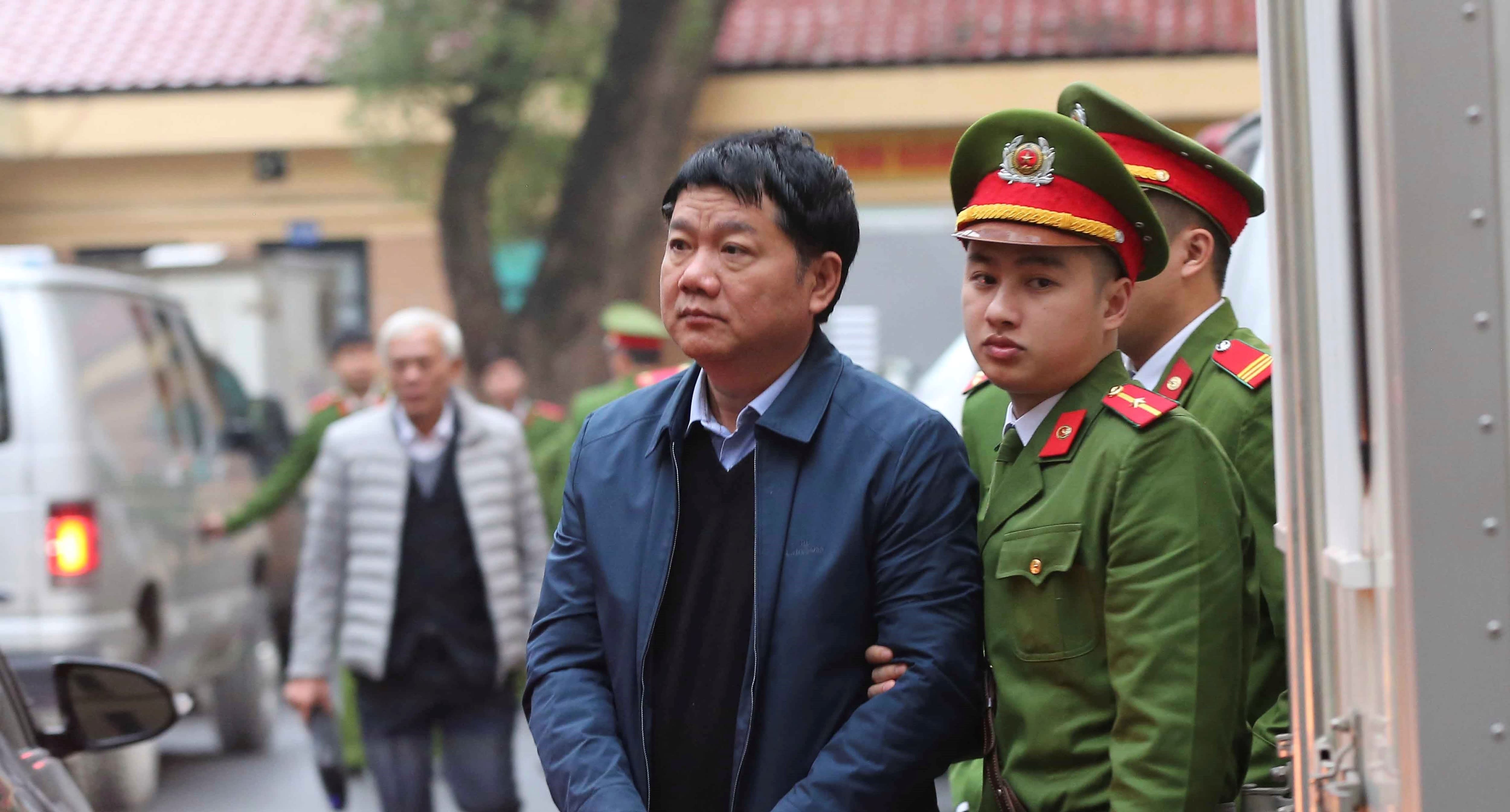 HANOI -- A corruption trial is captivating Vietnam and raising investor eyebrows, with the government risking tarnishing the image of state enterprises just as it takes some of them public.

To some, the proceedings are reminiscent of the political tactics in another communist-run country -- China.

Twenty-two defendants are facing charges that include breaches of discipline and embezzlement. They include high-profile former executives of Vietnam National Oil and Gas Group, or PetroVietnam, one of the country's largest state-owned enterprises.

Curiously, the trial was announced in late December, soon after PetroVietnam's three principal subsidiaries announced they would complete initial public offerings by the end of January. The IPOs by Binh Son Refinery, gas station operator PV Oil and utility PV Power had reportedly been planned for 2017 but were delayed.

As Southeast Asia's fastest-growing economy, Vietnam remains short of capital and the IPOs are part of a plan to increase capital for local companies and boost revenue to the government.

The legal proceedings could make investors think twice about buying shares in the state-owned groups, however, potentially dealing a blow to the government's finances and its broader economic reform effort.

The odd timing and drama-filled hearings have kept all eyes on the Hanoi court, where the trial kicked off on Jan. 8. The proceedings have been running for 10 hours a day, even on weekends, according to the small media pool allowed to sit in.

The most prominent figure facing charges is Dinh La Thang, 57, a former secretary of the Ho Chi Minh City Party Committee and an ex-transport minister who once served as chairman of PetroVietnam. "I want to be out of prison before my death, to die at my home in my relatives' hands," media reports quoted Thang as saying in his final testimony. Thang was once considered the right-hand man of former Prime Minister Nguyen Tan Dung, and as a leading young cabinet member in the previous government. State TV showed a hollow-cheeked, tired-looking Thang in court.

"I want to have a Tet holiday with my family before going to prison," he said. Tet is the lunar new year, and the most important holiday in Vietnam when families gather. It falls in mid-February this year.

Thang is the first former cabinet minister to be arrested in Vietnam. He belonged to the highest echelon of the Communist Party, which has five million members, and until last May was a member of the politburo. No other former politburo member has ever been arrested. Thang has been accused of involvement in an Ocean Bank transaction to PetroVietnam that inflicted an 800 billion dong ($35.1 million) loss on the lender.

So why now? There are a couple of ways to look at the timing of the trial.

A Japanese diplomatic source suggested that Nguyen Phu Trong, the general secretary of the Communist Party, has taken "a scalpel" to the oil, gas and other energy sectors as part of an earnest anti-corruption campaign. The diplomat said the Vietnamese leadership has delivered a strong message to the public with the trial: It is willing to go after even former PetroVietnam executives, who have been central to the vested interests distorting the country's economy and politics.

In this light, launching the trial in conjunction with the three PetroVietnam IPOs shows a strong resolve to expose wrongdoing.

But some see the trial as part of an effort to assert political control, with similarities to President Xi Jinping's anti-corruption drive in China that took down one foe after another. The communist parties of Vietnam and China share a history of friendship as a united front in the struggle of the proletariat.

"China and Vietnam, to a certain extent, share similar political systems," Carlyle A. Thayer, an emeritus professor at the University of New South Wales told the Nikkei Asian Review.

"It would be surprising if Vietnam's leaders did not learn lessons from China's experiences.China's anti-corruption campaign is being carried out by Xi Jinping, a party leader who has arguably accumulated more power than Mao Zedong. In Vietnam's case, while the anti-corruption campaign is being led by the party's secretary general, it is being implemented by a collective leadership." The current leadership, led by General Secretary Trong and Prime Minister Nguyen Xuan Phuc, took over at the Communist Party convention in April, 2016.

Dung, the previous prime minister, racked up a number of high-profile achievements during his term, such as the launch of a north-south express railway, and the Samsung Electronics' decision to put down roots in the northern provinces of Bac Ninh and Thai Nguyen. Dung fell from power, however, and gave up on his ambition to be the first party chief to hail from the south. People close to Dung remain at PetroVietnam and other SOEs, as well as in local governments and other entities.

Trong and Phuc are widely perceived to be working together to wipe out Dung's influence and build up their own power bases as the new leadership enters its second year. This campaign appears to be coming out into the open with the trial.

There is the case of Trinh Xuan Thanh, 51, a former chairman of another subsidiary, PetroVietnam Construction. Thanh worked for Thang when the latter was chairman of PetroVietnam, and is said to have knowledge of Dung's dealings; now they find themselves in court together. The undated photo shows Trinh Xuan Thanh in Berlin, where he was apparently snatched by Vietnamese security forces. (Photo by Bui Thanh Hieu)

Thanh was seeking asylum in Germany when he disappeared from Berlin last year. He later surfaced on Vietnamese state TV saying he had turned himself in. The German government, however, alleged that Vietnamese intelligence agents had snatched him. The dispute prompted Germany to partially halt official development assistance to Vietnam.

One Vietnamese journalist suggested that if the current leadership was willing to go to such lengths to arrest Thanh, it is evidence of their determination to root out Dung's influence. Depending on Thanh and Thang's testimony, the investigation may yet extend to the former prime minister himself. Trinh Xuan Thanh, center, appears in court in Hanoi on Jan. 8. Thanh, who chaired a construction arm of PetroVietnam, is accused of mismanagement causing serious consequences and embezzlement.   © Vietnam News Agency via AP

Cracking down now is a gamble, but the leadership may be governed by two imperatives -- reinforcing its own power base and maintaining the country's growth momentum.

When it comes to boosting revenue, the clock is ticking. Vietnam needs huge infrastructure investments, but in the 2018 budget state revenue is projected at $58 billion, with an expenditure of $67 billion. The expected deficit of $9 billion will have to be covered by borrowing, while payments on principals total $7 billion this year.

The government can boost its coffers with smooth listings of major state-owned enterprises and their affiliates, and by letting foreign strategic partners participate in the management of SOEs to make them more competitive globally. When Vietnam joined the World Trade Organization in 2007, it pledged to end the special treatment of SOEs and let them operate under the same conditions as foreign companies and private domestic ones. It has come a long way since. Vietnam had some 5,000 SOEs in 2005, but many have been converted into joint-stock companies with more relaxed restrictions on foreign capital.

By 2016, the remaining SOEs numbered just 856. Of these, 583 were entirely state owned, and 273 were partially owned joint-stock companies, according to the finance ministry. SOEs accounted for 28.8% of gross domestic product, down from about 50% in 2005.

Vietnam also made commitments to reforming SOEs when it decided to join the then U.S.-led Trans-Pacific Partnership. The government intends to follow through with this even though President Donald Trump pulled out of the pact early last year.

Meanwhile, Vietnam became a fully integrated member of the ASEAN Economic Community on Jan. 1. This means it has cut tariffs on automobiles and some other imports to zero, which will result in tax revenue reductions. Vietnamese companies will also face tougher competition as Thai, Indonesian, and other regional players move into the country, said Susumu Sato, an analyst at Jetro in Hanoi.

All this could stall Vietnam's growth, which is why making state companies more competitive is so crucial.

The next step is to find global partners. The government has announced plans to sell its stakes in 12 big SOEs, such as Vietnam Dairy Products (Vinamilk), but only three so far have found strategic investors. 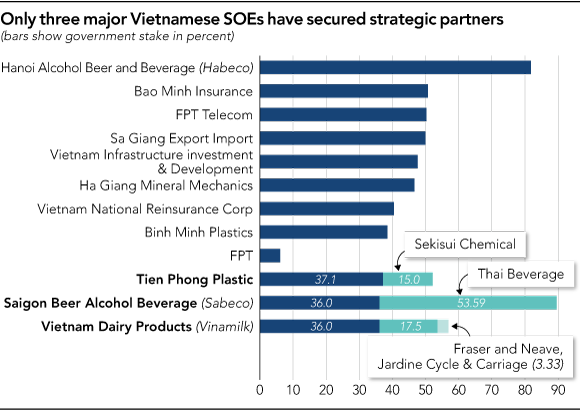 One strategic partner that has stepped up is Thai Beverage, Thailand's biggest alcohol and beverage maker. In December, it paid $4.85 billion for shares in Saigon Beer Alcohol Beverage (Sabeco). ThaiBev was the only company that submitted a bid, and Vietnam had been hoping for more interest. Around a dozen potential investors attended the Sabeco roadshow in Singapore in November, including Japanese beer and beverage conglomerates Asahi Group Holdings and Kirin Holdings. There were also investment funds and banks from Asia and Europe present.

After leaving the event weighed down with stacks of documents, some participants seemed rather deflated. "It's all about Sabeco's general strategies, nothing new," one said.

"We still don't know what they are thinking," said another attendee from an international fund after a closed-door meeting.

As for this round of IPOs, Anglo-Dutch oil major Royal Dutch Shell, Japan's Idemitsu Kosan and four other companies have reportedly come forward as possible strategic investors in PV Oil.

If the offerings prove successful and strategic investors come through, Vietnam's SOE reforms will gather steam. Conversely, a failure to ensure transparency could prompt global companies to turn their backs.

Either way, Vietnam is approaching a pivotal moment -- starting with the rulings in the corruption trial.

Prosecutors have demanded life sentence for Thanh and 14-15 years for Thang, while the other defendants are looking at terms from 17 months to 28 years. The sentences are expected to be handed down by Sunday and be made public shortly after.