Who are leading contenders in 2017 South Korean presidential poll?

SEOUL -- In South Korea, presidential aspirants are known as lurking dragons, referring to dragons that are still submerged under water and have yet to climb into the sky. The next election to choose a successor to current President Park Geun-hye will be held in 2017. In local elections earlier this month, which served as an interim assessment of the Park government, politicians maneuvered with an eye on the presidential poll in three years behind the fierce battle between the ruling and opposition parties.

After the municipal elections, reelected Seoul Mayor Park Won-soon swiftly vaulted to the forefront of the presidential candidates. The chief of the South Korean capital with a population of 10 million has overwhelmingly strong communication abilities. Former President Lee Myung-bak obtained a ticket to the Blue House presidential residence on the strength of his achievements as the mayor of Seoul.

Park Won-soon, a former human rights lawyer, is a leading citizen movement activist in South Korea. He once dealt with the issue of the wartime South Korean "comfort women" of the Japanese military, and told the press during his first term as mayor that unless the past issues are completely settled, they will shackle his nation in the future, leaving the Japanese government to solve the problem itself. 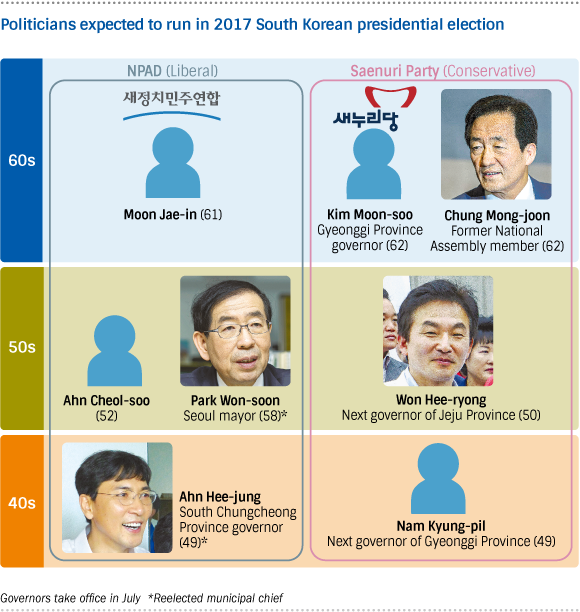 His tenure as Seoul mayor ends in 2018. Although Park promised to serve a full term, it is widely believed that he would cut his tenure short if calls for him to run for president mounted. The biggest opposition party, the liberal New Politics Alliance for Democracy, is banking on him as a trump card to win back power for the first time in a decade.

NPAD's other possible presidential candidate is Ahn Hee-jung, reelected governor of South Chungcheong Province, who is still young at 49. He is not coy about his presidential ambitions, saying, "I'd like to run in a presidential election after accumulating experience." Having devoted himself to democratization movements since he was a student, he was one of the closest aides to the late President Roh Moo-hyun.

With Roh fiercely at loggerheads with Japan over historical and territorial issues, Ahn is largely seen as belonging to an anti-U.S., anti-Japan school. He refutes this view, however, noting, "That's a misunderstanding. Anti-U.S. struggles or anti-imperialism movements denouncing Japan's old-time colonial rule are things of the past."

As a potential presidential candidate, NPAD also has Ahn Cheol-soo, who commanded tremendous support from non-affiliated voters in the 2012 presidential election, though he withdrew in the middle of the campaign. At the time, he was independent but now he is the co-leader of NPAD, which was created in March through a merger between his political group and the former Democratic Party. Yet another NPAD lawmaker, Moon Jae-in, became the opposition parties' joint candidate thanks to Ahn Cheol-soo's withdrawal in the 2012 presidential election. However, he lost a close race to Park Geun-hye, and is now poised to again take on the presidential challenge.

Meanwhile, no powerful candidates are to be found for now within the conservative ruling Saenuri Party, partly due to President Park's governing style of not nurturing a second-in-command.

Initially, Chung Mong-joon, the sixth son of the founder of Hyundai Group conglomerate, was a front-running Saenuri candidate for the presidency. Making the 2002 soccer World Cup in South Korea and Japan a success as vice president of the International Federation of Association Football, he boasts high name recognition. With his defeat by Park Won-soon in the recent Seoul mayoral election, however, he suffered an undeniable setback.

In his place, younger members such as Nam Kyung-pil, who won a neck-and-neck race for governor of Gyeonggi Province, which surrounds Seoul, and Won Hee-ryong, governor-elect of Jeju Province, are emerging as the ruling party's presidential candidates. Both of them are former members of the National Assembly and are known as reformists critical of Saenuri's propensity for authoritarianism.

The two first need to rack up a solid track record as governors, looking at not just the next presidential election but also the one after. Among veteran Saenuri politicians, outgoing Gyeonggi Gov. Kim Moon-soo and Kim Moo-sung, who has come forward as a candidate for the party leadership, are watching for an opportunity to run in the presidential poll.

An opinion poll conducted by The Korea Times immediately after the local elections showed that Seoul Mayor Park was most favored as a candidate for president. But his support rate was still low at 17.5%.

The South Korean political world moves quickly. There is a possibility that someone who is not on the current list of likely presidential candidates will suddenly pop up as a major contender. A battle among the lurking dragons has only just begun.