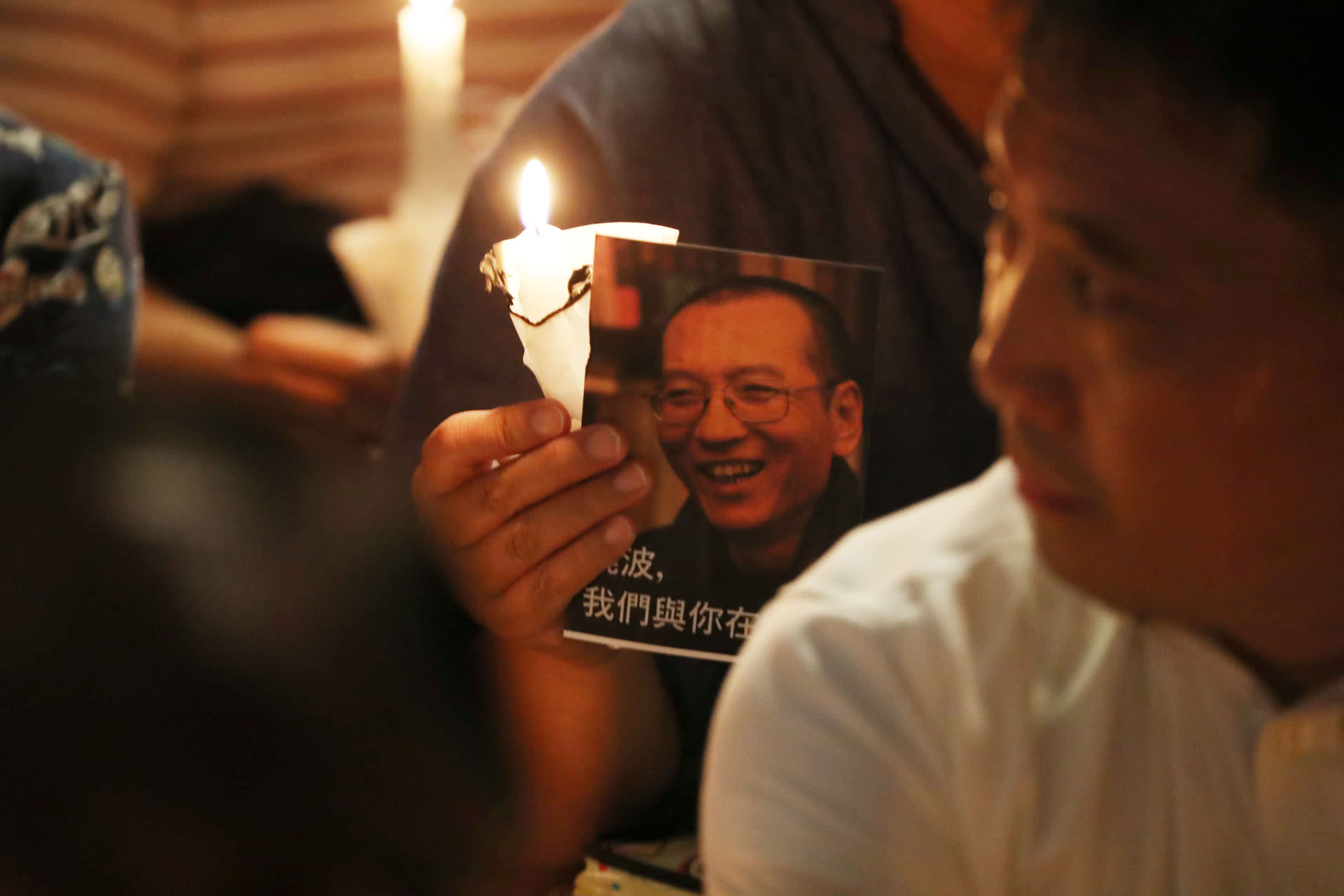 HONG KONG -- At the same time Chinese President Xi Jinping was enjoying a feast with his wife and supporters here on Thursday, hundreds congregated less than a kilometer away to demand the immediate and unconditional release of 2010 Nobel Peace laureate Liu Xiaobo, who was only allowed a medical parole after becoming terminally ill in a Chinese prison.

Responding on short notice to a call from the Hong Kong Alliance in Support of Patriotic Democratic Movements of China, men and women both young and old started flocking to a public square adjacent to the territory's highest court after 8 p.m. local time. People held lit candles to demonstrate their peaceful protest of the injustice done to Liu Xiaobo and his wife Liu Xia. The organizer is a local pro-democracy organization that has sponsored the annual candlelight vigil commemorating the 1989 Tiananmen Square crackdown on June 4th for almost three decades.

Liu Xiaobo, a writer and democracy advocate, was sentenced to 11 years in prison on Christmas Day 2009 for authoring "Charter 08," a manifesto calling for the rule of law, respect for human rights and an end to one-party rule in China.

His serious case of liver cancer was officially revealed Monday by the Liaoning Province prison authority, even though the diagnosis was made in May. The authority stressed that he has been hospitalized and given proper care under medical parole, but according to his wife, it may be too late to save him. She has been under house arrest just for being Liu Xiaobo's wife.

Albert Chan, an 80-year-old piano instructor, came to the square on Thursday night "just to support Liu Xiaobo." Having witnessed a series of brutal cases of maltreatment in mainland China, he said, "I am ashamed of being Chinese."

This was shared by younger participants as well. Li Yanyan, a 33-year-old mother of two young children and the wife of pan-democratic legislator Ted Hui Chi-fung, was born in China and moved to Hong Kong 17 years ago. "I am Chinese, but I don't like the way things are done over there," she said. While she shares her feeling with and relates to Liu Xia, she brought her two kids to "tell them the truth."

For many people in Hong Kong, human rights abuses to the north are not new, but they are becoming to look more like their own issues. There is a growing sense that various freedoms that were supposed to be guaranteed under "one country, two systems" have been eroding Lee Cheuk-yan, a longtime human rights activist in China, told the participants: "If the freedom of Liu Xiaobo is not respected ... how can we trust, how can we believe the Communist Party?"

As the demonstrators demanded the immediate and unconditional release of Liu Xiaobo, President Xi and his wife Peng Liyuan were attending an official dinner hosted by Hong Kong chief executive Leung Chunying and his wife Regina at the Government House, just a few hundred meters up the hill.

However, ordinary citizens have no chance of seeing the Chinese president in person, as he and his delegation have been heavily guarded since he set foot in the territory around noon on Thursday. Chances were slim that the protesters' message would reach Xi's ears.

"That's alright," said Albert Ho Chun-yan, chairman of the Hong Kong Alliance, adding that Xi's tightly guarded trip is just an indication of his weakness. "The most important thing is to speak clear and loud to Xi Jinping."

Immediately after stepping out of the airplane, Xi gave a short speech in which he said: "I am hoping, from here on, to feel firsthand the new atmosphere and new changes that have developed in Hong Kong over these years." We will find out whether he actually means it.