TOKYO -- Chinese President Xi Jinping shows no sign of letting his guard down despite having significantly consolidated his power.

"Xi's inner circle is dominated by people who have been Xi's friends since he was in his teens and 20s," said a Chinese researcher familiar with the country's political realm. 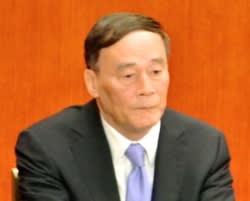 The president apparently places his full trust only in these old friends.

The Chinese Communist Party, which the 62-year-old Xi concurrently serves as general secretary, had 87.79 million members at the end of 2014. That total is higher than Germany's population.

Many people may think Xi has secured his aides through an excellent recruitment system. But in reality he has simply handpicked members of his inner circle from among his childhood friends.

This circle includes fellow members of the so-called Princeling faction. Princelings are the children of prominent and influential senior Communist Party officials.

Xi has staked his political life on the success of his anti-corruption campaign. Spearheading the campaign is Wang Qishan, the 67-year-old head of the Communist Party's Central Commission for Discipline Inspection, the ruling party's top anti-graft body.

Wang is an old and trusted friend. He and Xi have known each other for more than 45 years. Wang is also one of the seven members of the Politburo Standing Committee, the Communist Party's top decision-making body, led by Xi. He is closer to Xi than any other member of the powerful committee.

Wang played a key role in driving Zhou Yongkang, a former member of the Politburo Standing Committee, into a corner. Zhou was recently sentenced to life in prison after having been found guilty of bribery and other crimes.

"Wang is the only other member of the Politburo Standing Committee Xi can trust," the researcher said. "Xi thinks the five other committee members could easily switch sides."

On July 8, Wang visited Shaanxi Province as part of his efforts to ensure that the Xi administration's anti-corruption campaign is being thoroughly enforced across the country. Shaanxi has a particular significance for Xi and Wang: It is where they first met. They were still youths at the time, but they pledged enduring friendship to each other.

They crossed paths because of what happened to Xi's father. Xi Zhongxun, a free-thinker, was purged before the 1966-1976 Cultural Revolution, which Mao Zedong launched in a bid to consolidate power. It was only after the Cultural Revolution that the elder Xi was fully rehabilitated.

Without the protection of his father, the younger Xi faced being sent to a youth labor camp. Xi managed to escape this fate by joining Mao's Up to the Mountains and Down to the Countryside Movement.

Through the movement, launched in 1968, numerous "intellectual youths" in urban areas were sent to live and work in rural areas.

Like most other cerebral youths of the time, Xi lived a harsh, "sent down" life. He would make his home in the remote Yanchuan County village of Liangjiahe, near Yan'an, in Shaanxi, from 1969 to 1975. Xi lived in a house that, very much like a cave, was built into the side of a hill.

Life was so tough, Xi would later write, that he fled to his parents' home in Beijing after only several months, although he was sent back soon thereafter.

Around that time, the susceptible teenage boy visited Wang Qishan, in Kang Ping, a neighboring village in the same province, where Wang had been "sent down" to.

The knowledgeable Wang had a princeling girlfriend in Kang Ping, the daughter of Yao Yilin, a former member of the Politburo Standing Committee and a former vice premier. The two would later tie the knot.

Chatting about the future

One and a half years ago, I visited Kang Ping, located northeast of Yan'an. Xi Jinping used to stay over at Wang Qishan's home in the village of Kang Ping, near Yan'an, Shaanxi Province.

An old villager who once cared for Wang and some of the other "sent down" youths remembered the nifty young man. The villager and I spoke near a monument recently built in memory of the young people forced to live there.

"Wang Qishan was living in the middle chamber of a three-chamber cave house," the villager said. "He was a leading and conspicuous figure. He also had a girlfriend."

When Xi used to visit Kang Ping, Wang would warmly greet him. The two youths spent a lot of time chatting about China's future while sitting on an ondol floor heater.

When Xi stayed over, the two youths would share the same bedding due to a supply shortage. Wang would also let Xi borrow the few books he had.

Wang is well-known as a bookworm.

This past April, when Wang met with foreign guests in Beijing's Zhongnanhai area, where Chinese leaders are based, he talked at length about a book authored by Japanese historian Hidehiro Okada, who disputes the conventional interpretation of world history.

It is quite surprising that a member of the Politburo Standing Committee has so carefully read a book by a Japanese scholar.

During the Cultural Revolution, a large number of youths, including princelings, were sent to Yan'an and surrounding areas. Some of the princelings now speak nostalgically of the old days.

Said one female princeling who spent several years near Yan'an: "We had a poor diet, always eating noodles. But life in those days has now also become a really pleasant memory ... like a really long school excursion."

Those sent to Yan'an and surrounding areas hold frequent reunions in Beijing. Even if they had not known each other by sight in those days, now they easily hit it off simply because of their common past, according to some of them.

Xi Jinping is no exception. He probably can unconditionally trust those who, like himself, were forced to spend chunks of their youths in the countryside around the same time.

Wang Qishan effectively joined the Princeling faction through his marriage with the daughter of Yao Yilin, who later became a member of the Politburo Standing Committee. This made Wang's relationship with Xi, a princeling himself, even closer.

One example of the closeness Xi and Wang share came when Xi met with some childhood friends belonging to the same Princeling faction while working in Zhejiang Province. Wang never left Xi's side.

Wang was promoted to the sixth-ranked member of the Politburo Standing Committee in 2012. At the same time, he also became the head of the Central Commission for Discipline Inspection.

Before becoming one of the seven Politburo Standing Committee members, Wang had already won a reputation for being well-versed in economic affairs. 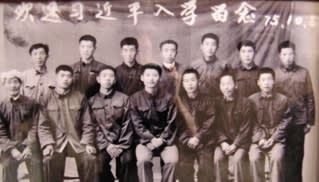 This photo, on display at a memorial hall in the village of Liangjiahe, near Yan'an, Shaanxi Province, shows Xi Jinping, center, front row, during his "sent down" years.

Wang dealt with the liquidation of the Guangdong International Trust and Investment Corp., a Guangdong Province-based nonbank also known as Gitic, and was also in charge of economic negotiations with the U.S.

To be sure, Wang's 2012 promotion was decided on by the previous Politburo Standing Committee. But Xi's wishes played a key role in Wang being appointed to head the Communist Party's top anti-graft body.

Xi has needed Wang during his fierce power struggle and is confident his childhood friend will never betray him.

The president has vowed to crack down on both "tigers" and "flies" -- powerful leaders and low-level officials -- in his anti-corruption campaign. Immediately after Xi and the rest of his leadership team were inaugurated, Wang launched an extensive probe into corruption.

Shaanxi is the home province of not only Xi but also his father, Xi Zhongxun. It can also be said to be Wang's second home province since he spent so much of his early life there -- during his sent-down years, his university days and while working at a museum.

On July 8, Wang inspected a facility built in the northern part of Shaanxi to commemorate a key meeting held by Mao Zedong and his communist comrades in December 1947, during the civil war between the communists and the nationalists.

Xi Zhongxun was among the participants at that meeting. While inspecting the memorial facility, Wang stood in front of a panel introducing the elder Xi and other meeting participants and featuring photographs of their faces.

Xi Jinping is a member of the so-called Second Red Generation, or the group of children of revolutionary-era Communist Party leaders who founded the People's Republic of China in 1949. Xi also belongs to the Princeling faction, a powerful political force.

The bond between Xi and Wang is profound. Although Chinese Premier Li Keqiang is the second-ranked member of the Politburo Standing Committee, sixth-ranked Wang is widely seen as effectively the No. 2.

This is why many people in Beijing's Zhongnanhai area privately talk about the "Xi-Wang structure," rather than the "Xi-Li structure."