AUCKLAND -- Fourteen Pacific nations, some of the world's smallest and poorest, agreed Thursday to a trade and economic agreement with rich neighbors Australia and New Zealand after 8 years of tortuous negotiations.

In the wake of the collapse of the much bigger Trans-Pacific Partnership Agreement, the Pacific Agreement on Closer Economic Relations (PACER Plus) was touted as a unique, unprecedented trade and development deal for the sustainable economic development of the region.

The deal was agreed at a meeting of trade ministers in Brisbane, Australia. 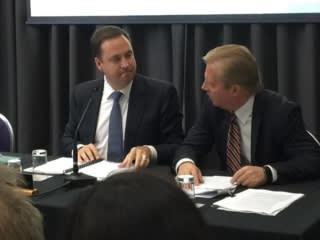 New Zealand Trade Minister Todd McClay termed PACER Plus "a very modern agreement" that strikes a balance between development and trade. He said in an interview the deal had the "potential to lift and increase trade, not only between the Pacific and Australia and New Zealand, but between the Pacific islands ... You will see over time an increase in investment and trade."

Significantly, the two biggest island economies, Papua New Guinea and Fiji, said last year they would not sign up to PACER Plus. Papua New Guinea had pulled out, saying it felt it could negotiate better bilateral deals while Fiji said the PACER Plus terms were not attractive enough. But McClay left the door open for further negotiations.

"The door remains open ... They will see the benefits in time," said McClay, calling PACER Plus a "model agreement" that could be replicated elsewhere.

The trade deal could help these South Pacific nations that face substantial challenges growing their economies as a result of poor infrastructure, limited phytosanitary measures for agricultural exports, weak regulation and low standards. These 14 nations account for just 0.05% of world trade.

PACER Plus includes a development package worth a total of $39 million that McClay said would help raise standards of living, create employment opportunities and increase export capacity in Pacific countries.

But Tess Newton Cain, founder of the Devpacific Thinknet think tank in Port Vila, Vanuatu, said it was hard to see how PACER Plus could be significant in dollar terms given that the two biggest Pacific island economies are not signatories.

"It doesn't give Pacific island countries any access to Australia and New Zealand that they didn't already have under (existing agreements)," Newton Cain said.

Tariffs on imported goods have been a major source of revenue for Pacific governments and under PACER Plus, these will decline for countries importing from Australia and New Zealand.

But Newton Cain said some countries, such as Vanuatu, are already compliant with World Trade Organization standards, and hence, had already booked the losses from reduced tariffs.

"The development assistance has the potential to be beneficial but that will depend on what the detail is of what it can be used for and how burdensome it is on Pacific Island countries to get access to it," she said.

A New Zealand Ministry of Foreign Affairs paper says PACER Plus is designed to make trader easier by ironing out these issues: sanitary and phytosanitary measures, technical barriers to trade, customs procedures, rules of origin, trade in goods, trade in services, investment, economic and development cooperation, and labor mobility.

PACER Plus will be complemented by a stand-alone labor mobility arrangement that will allow workers from Pacific nations systematic access into Australia and New Zealand.

The Vanuatu-based Office of the Chief Trade Adviser that provides independent advice and support to Pacific island countries, said PACER Plus could also lead to greater financing assistance from Australia and New Zealand to effectively implement the deal. This could include agreements on foreign investment in Pacific countries.

"Foreign investment helps bring in the necessary capital, knowledge and technology to start new -- or expand existing -- businesses, including to take advantage of export opportunities in the region," the office said in a statement.

It also said the agreement would lead to the gradual removal of import duties and thus lower prices for consumers in Pacific countries.