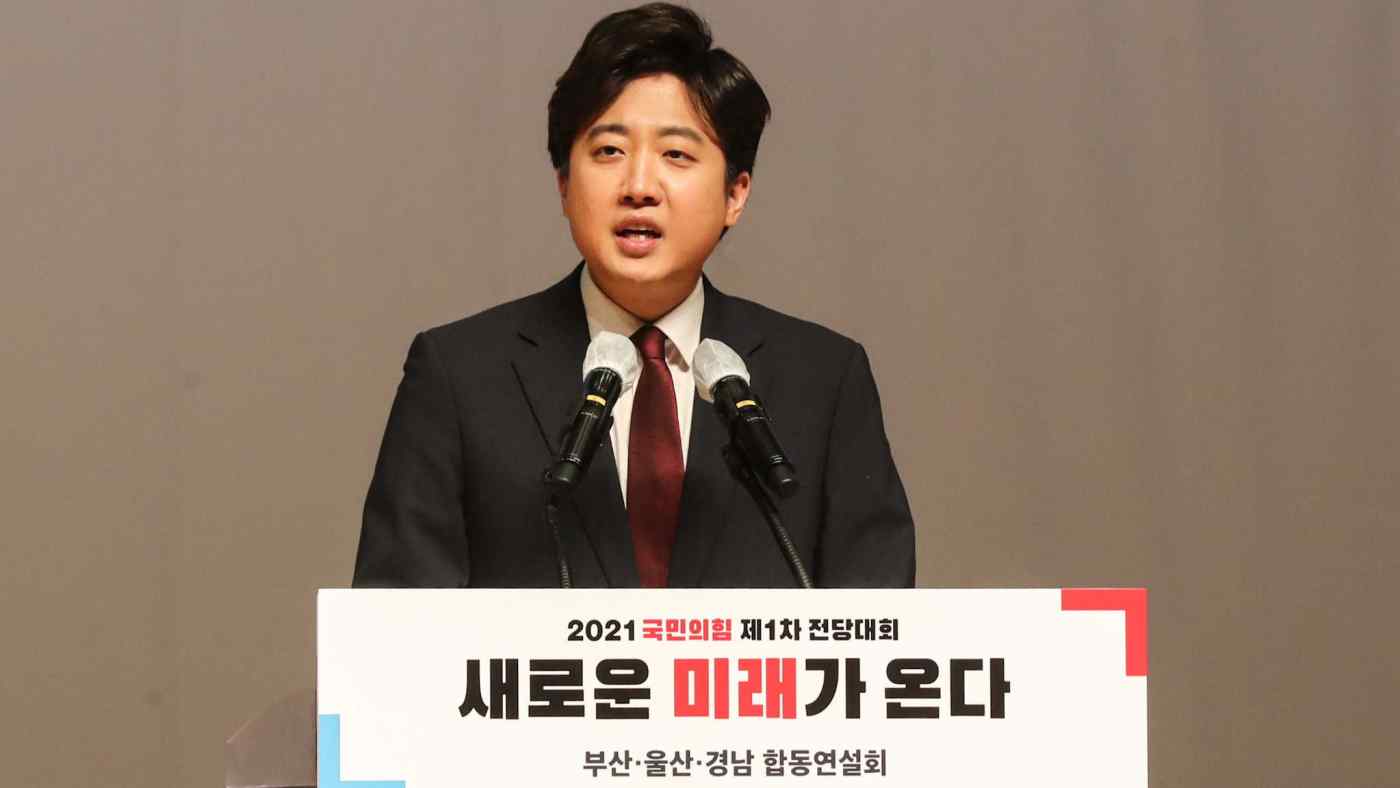 SEOUL -- As South Korean President Moon Jae-in finds himself facing a backlash from the country's disillusioned youth, a 36-year-old political novice has taken a step closer to leading the party that will challenge Moon's Democrats in next year's presidential election.

"We will transform into a youthful People Power Party that the younger generation will recognize as bearing no resemblance to the party they once knew," Lee Jun-seok, the rising star of the main opposition party, said Wednesday during a speech sponsored by the PPP in the city of Busan.

Lee emerged as the winner of a May 28 primary to pick the next leader of the PPP. Despite having no legislative experience to speak of, he beat out veterans such as former four-term lawmaker Na Kyung-won, who is 57.

In polls among PPP supporters, Lee routinely outpaced Na by nearly 20 points. The party will choose its leader during the convention on June 11.

After graduating from Harvard University, Lee became an entrepreneur by founding an education technology startup. In 2011, he entered the political sphere at age 26 by joining an emergency leadership council formed to shake up PPP's predecessor, the then-ruling Grand National Party.

Lee was recruited by the sitting head of the GNP, Park Geun-hye, who would later become president in 2013. Due to their relationship, Lee was called one of "Park Geun-hye's kids," seen to add new blood to the staid, conservative party.

He ran three times for a seat in the National Assembly, only to lose each time. But Lee saw his political stock climb after Moon's ruling Democratic Party suffered crushing defeats in April's bellwether mayoral races in Seoul and Busan, the country's two largest cities.

The Democrats came into power on a progressive platform, but it is now floundering amid high unemployment rates and an overheated real estate market. South Korean police arrested dozens of politically connected figures alleged to be involved in a land speculation scandal.

As a result, Moon has largely lost the support of men in their 20s and 30s, and his approval rating tumbled to record lows below 30%.

The GNP changed its name to Saenuri in 2012 to distance itself from the unpopular incumbent President Lee Myung-bak. Park's corruption scandal and removal from office in 2017 triggered a series of rebrands -- the "People Power Party" label was adopted only last year.

The mayoral races marked a long-awaited victory for conservatives, who had suffered loss after loss in major elections since 2016. But the results owed mainly to mounting public frustration with Moon's administration.

To ride this momentum to the next presidential race, conservatives will need to shake off their party's image as old and clinging to vested interests.

Lee cannot run for president, as he is still below the minimum age of 40, but choosing him as party leader would signal a changing of the guard between generations.

"We have to show that we're changing in order to draw young people and independents," a People Power Party source said. "There's a sense of crisis within the party."

Lee has leaned into this by putting forward policies generally seen as fringe, such as requiring a degree of digital literacy for politicians and rethinking affirmative action measures aimed at helping women. He is a skilled speaker who used to appear on a talk show as a young conservative debater.

In a televised debate Tuesday with other contenders for party chief, Lee took an aggressive approach that came as little surprise after a Facebook post saying that attacks against him would be paid back double.

When Na questioned his qualifications to lead, Lee retorted that he is more popular among women than she is. More than a few people saw his remarks as disrespectful in a country where age-based hierarchies are deeply ingrained.

Next Friday's leadership contest will be based on both a vote by party members and by public opinion polls, weighted at 70% and 30%, respectively.

Men aged 60 and older living in the southern region of Gyeongsang, an area that includes the cities of Busan and Ulsan, are believed to make up a majority of party members. Whether this traditionally conservative group will accept someone like Lee who has cast himself as a reformer will likely be central to the outcome.