40 years from 'Year Zero': Cambodia's young wrestle with dark past 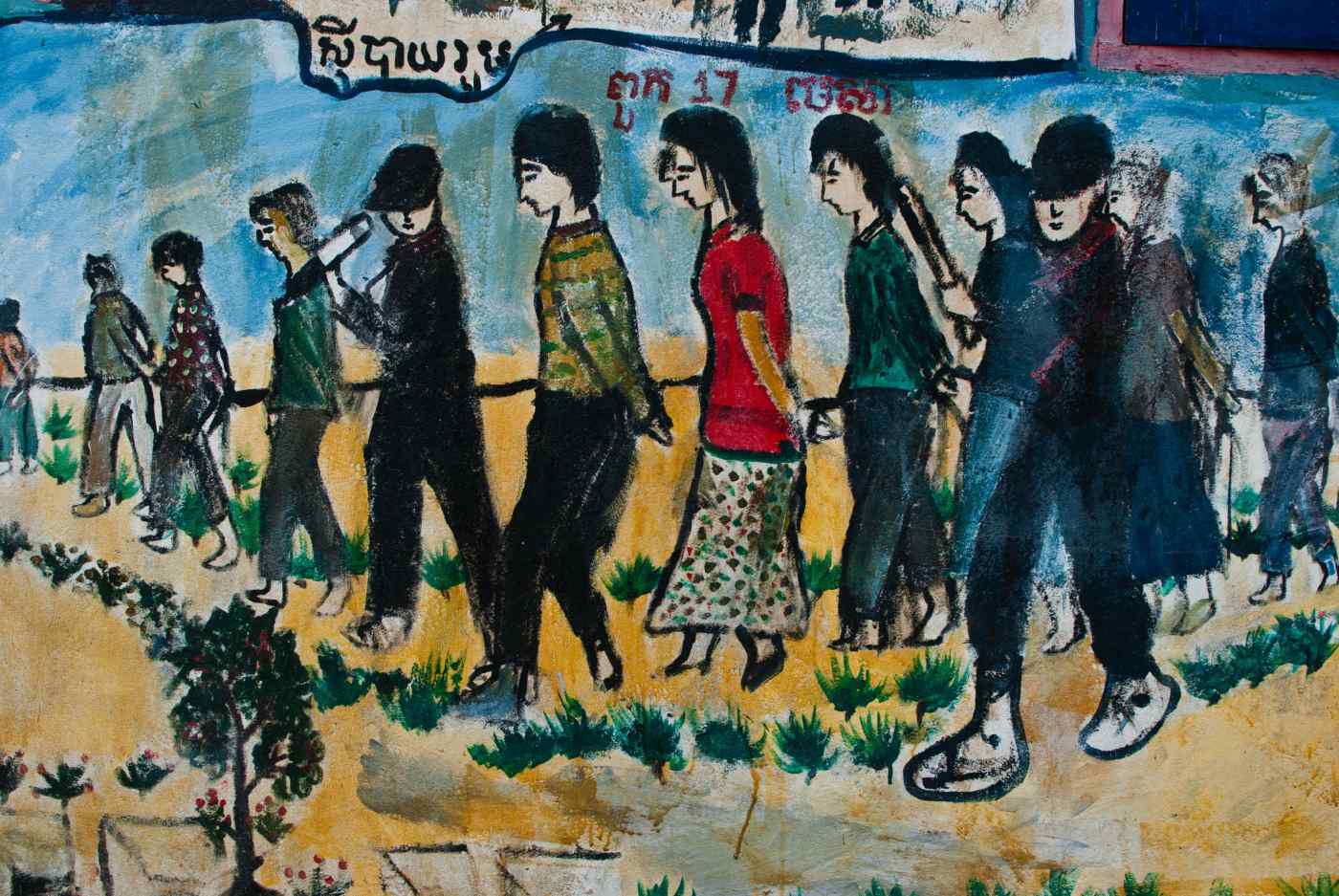 TAKEO, Cambodia -- On April 17, 1975, the communist Khmer Rouge marched into Phnom Penh and seized power. As a 13-year-old boy, Rithy Panh, now an internationally acclaimed filmmaker, recalls the unease that settled over the city as the black-clad peasant troops took control. "I felt something very oppressive," he said. "It was something very heavy, like the weather before the rain."

The seizure marked the start of a bloody political maelstrom that engulfed Cambodia for three years, eight months and 20 days. Setting the dial for their twisted vision of a "Year Zero" utopia, the Khmer Rouge and paramount leader Pol Pot emptied the cities, banned money and enslaved the population in vast rural collectives. 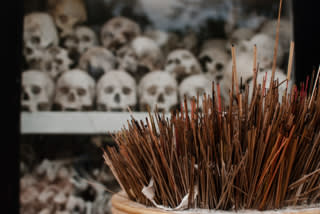 Skulls and other human remains are preserved at the Kraing Ta Chan Security Center. (Photo by Sebastian Strangio)

By the time the regime collapsed in 1979, an estimated 1.7 million Cambodians had perished from starvation, overwork, torture and execution. Rithy survived but lost most of his immediate family. He would later devote his career to making sense of the cataclysm through his films. "I promised that if I would survive I would tell what happened," he said at his studio in Phnom Penh.

"They don't want to listen"

Today, Cambodia is a very different place. From 1998 to 2007, its economy was one of the world's fastest-growing, expanding by an average of 10% year. Phnom Penh, a ghost town under Pol Pot, has been transformed into a bustling city of high-rise office buildings and glitzy shopping malls, where youth sport the latest electronic gadgets. Nearly two-thirds of Cambodia's 15 million-plus population is under 30, according to United Nations data. Only a relatively small minority has any memory of the Khmer Rouge era.

The upshot is a growing divide between those who directly experienced the nightmare and those who can barely imagine it. Among the latter is Svay Bros, a 16-year-old living in Takeo, a sleepy provincial town 75km south of the capital. Growing up, the Khmer Rouge was a bogeyman for Bros -- a shadowy presence older relatives invoked to scare him into behaving. "When I'm lazy, my grandparents often say, 'In the Pol Pot time, you would have been killed for that!"

For Than Rath, an 18-year-old clad in a Newcastle United soccer jersey, past horrors fade in importance next to the usual teenage concerns: girls, gadgets and going out. "I want to have some money, and I'm not too worried about the past," he said, sitting at a village cafe his family owns in Takeo. His father, Keo Thy, 44, complained: "I try to tell my sons about my life under Pol Pot and they don't want to listen to me. ... They don't want to know about torture, killing or hardship."

Underscoring the irony of Keo Thy's lament, one of the grisliest vestiges of Khmer Rouge rule stands near his village. Kraing Ta Chan Security Center was built in 1972 in one of the first parts of Cambodia to be captured by the communist insurgents. It served first as a training facility for Khmer Rouge cadres, then as a prison where suspected enemies of the regime were jailed, tortured and executed.

Than Rath's grandfather, Keo Thon, 67, recalled seeing blindfolded prisoners being walked through his village during the Khmer Rouge years. They came most days, he said, "usually in the afternoon."

Prosecutors at the U.N.-backed tribunal trying former Khmer Rouge leaders say some 15,000 people lost their lives at Kraing Ta Chan. Today it is a quiet, leafy place, marked by a white stupa -- a dome-shaped Buddhist shrine -- filled with hundreds of exhumed skulls. At its base lie bundles of burned joss sticks and two dishes, one bearing a rusted shackle from the old prison, the other a pile of human teeth.

Elsewhere, hand-painted information boards mark the location of burial pits. One describes how prisoners were questioned under torture. "The answers didn't matter," it states flatly. "They were all killed eventually."

Kraing Ta Chan is just one of hundreds of former killing sites that dot Cambodia, totems of a dark and unresolved history. Elsewhere, survivors wrestle privately with their traumas, while hundreds of killers who received amnesty later under Prime Minister Hun Sen -- himself a former Khmer Rouge cadre -- live in peaceful retirement.

Robert Carmichael, author of "When Clouds Fell from the Sky," a new book on the period, said that despite the achievements of the Khmer Rouge tribunal -- known officially as the Extraordinary Chambers in the Courts of Cambodia -- the country remains largely unreconciled. "There's a huge gap that hasn't been bridged at all," he said.

One key to closing the gap is education. Youk Chhang, director of the Documentation Center of Cambodia, or DC-Cam, said that while many Cambodian youth might see the past as remote from their concerns, sooner or later they will start to ask questions. "As they grow older, they will realize that it's incredibly significant for their future," he said.

To provide them with answers, DC-Cam, an independent body that researches Khmer Rouge crimes, in 2007 published "A History of Democratic Kampuchea (1975-1979)." It was the first proper school textbook on the Khmer Rouge. In 2009, the 73-page volume, a clear-eyed text featuring rare photos from DC-Cam's archives, became a compulsory part of the national high school curriculum. It has since been translated into six languages, and more than 350,000 copies have been distributed to 1,700 schools.

There is a lot of ground to make up. Until 2007, Khmer Rouge history was not taught in Cambodian schools at all due to political sensitivities. Since coming to power in 1979, the ruling Cambodian People's Party has built its legitimacy on the fact that it overthrew Pol Pot and brought peace. In the 1980s, the party built dozens of memorials at places like Kraing Ta Chan, encouraging survivors to see the CPP as the midwife of their "second birth." The memorial stupa at Kraing Ta Chan was built by CPP President Chea Sim.

Prime Minister Hun Sen has also played on survivors' trauma, portraying the CPP as the only guarantee of stability and economic progress. In January, he proclaimed that anyone opposing his three-decade rule was "an ally of the Pol Pot regime." Complicating matters further is that many CPP officials, Hun Sen included, served the Khmer Rouge before helping to overthrow it.

Chhang said these entanglements have made it hard for Cambodians to discuss their history without bias. Even getting official approval of DC-Cam's textbook was a challenge. In 2006, when a government commission reviewed it for public use, only four of the seven members voted in favor. Dissenters complained that it did not put enough emphasis on the CPP's achievements.

With open discussion discouraged, some Cambodians have fallen victim to what Chhang describes as "the disease of conspiracy." Today a minority still denies that the Khmer Rouge were responsible for what happened in the mid-1970s, instead blaming neighboring Vietnam, which drove out the Khmer Rouge after invading Cambodia in late 1978. To this day, Vietnam remains a frequent target of nationalistic animosity. "That's why the role of history is important," Chhang said. "Not knowing it accurately makes you incomplete." Rithy Panh stands on the balcony of his studio in Phnom Penh. (Photo by Sebastian Strangio)

To help reach a new generation of tech-savvy youth, DC-Cam intends to digitize its textbook and create a mobile app that will allow students to share their families' stories online.

Pheng Pong-Rasy, a team leader of DC-Cam's Genocide Education Project, said that only a balanced understanding of their country's past will teach young Cambodians to think critically about a present that remains plagued by impunity, political violence and pervasive corruption. "Not just yes or no -- the questions should be, why, what and how? How did the Khmer Rouge regime happen?"

It is a complex question, and one that Rithy Panh has tried to answer in his own way, through films like the 2000 documentary "S-21: The Khmer Rouge Killing Machine." His most recent feature, "The Missing Picture," was nominated for an Academy Award in 2014. "It's complex, it's painful, but we have to resolve it," he said. "And when it's written you can turn over the pages. You cannot turn over empty pages."

Rithy detects a growing interest in history among the young. When he made his first films in the late 1980s and 1990s, few Cambodians came to screenings. But when he showed "The Missing Picture," which uses tableaux of clay figurines to depict his experience in Pol Pot's "Democratic Kampuchea," the cinemas were full of young Cambodians. "It's a very interesting phenomenon," he said. "They want to discover what happened to their families."

On the outskirts of Takeo, by a sprawling lake, 18-year-old Pring Sreinich and six of her friends gathered on a recent morning, playing music on their mobile phones and buying shaved-ice treats from a traveling vendor. Unlike past generations, all of them had studied the Pol Pot regime at school.

Sreinich, currently in the 11th grade, said it is hard to make comparisons between now and then, although she emphasized that she is happy to look back as well as forward. "I think it's very important," she said. "If we know about the past, that it was very difficult, we will be more thankful for the present."