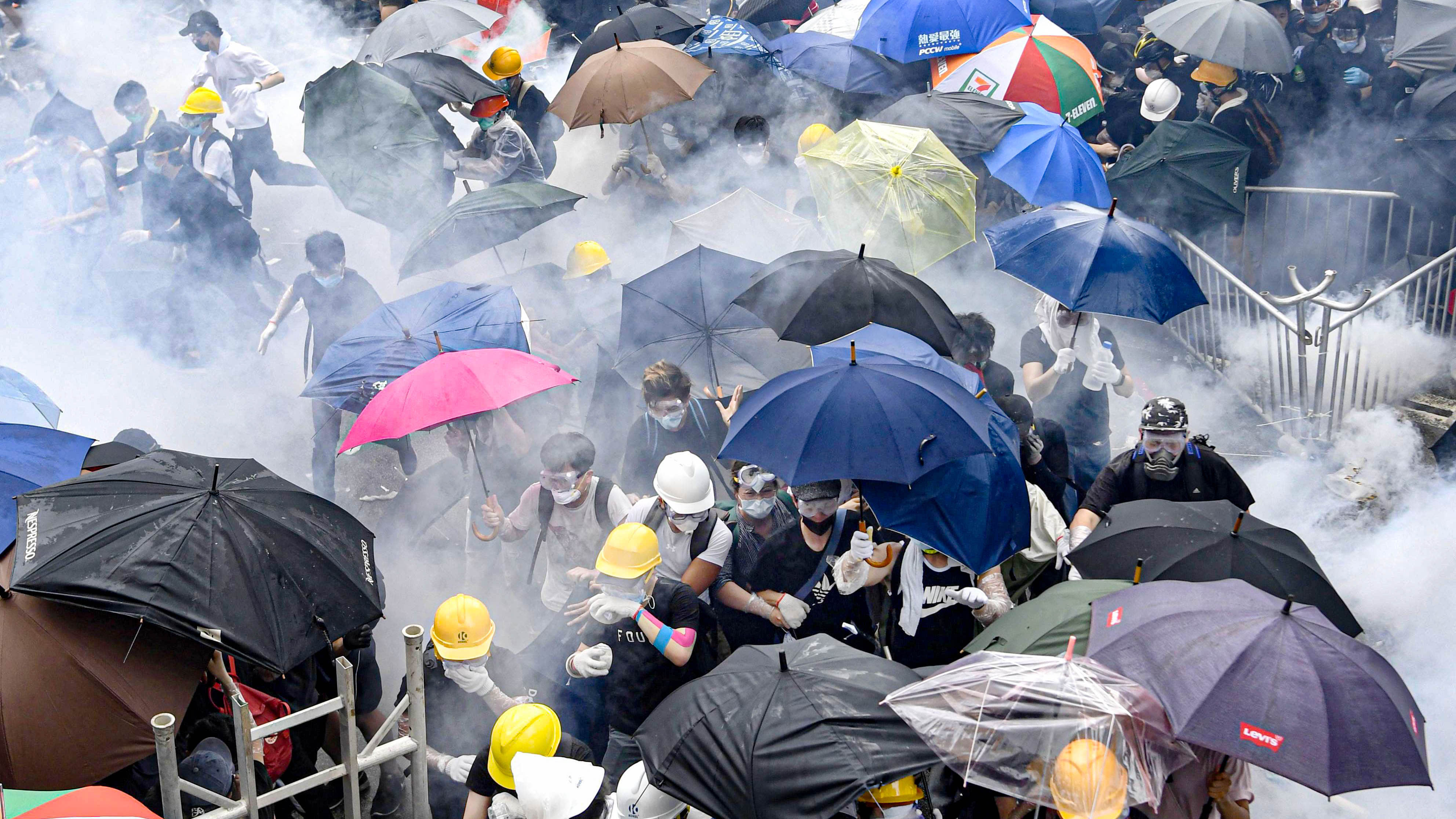 Protesters in Hong Kong react after police fired tear gas on them during a demonstration against a proposed extradition bill on Wednesday. Authorities said some protesters hurled objects -- including bricks, iron bars and road barriers -- at the police, injuring some officers.   © Kyodo

HONG KONG -- Protests in Hong Kong against a proposed law that would allow people to be extradited to mainland China turned violent on Wednesday afternoon, with police firing rubber bullets, tear gas and pepper spray to disperse crowds that had surrounded the city's main government compound.

Hong Kong’s Hospital Authority told Nikkei that 72 people were injured as of Wednesday evening, with two in serious condition.

Some demonstrators attempted to break through police barricades after thousands earlier occupied a main road in the city and blocked lawmakers from entering their complex, prompting the postponement of a scheduled debate on the bill by the Legislative Council.

Police said some protesters hurled objects -- including bricks, iron bars and road barriers -- at the police, injuring some officers. Television footage showed at least one police officer as well as other people being treated for injuries.

In a video statement on Wednesday evening, Hong Kong Chief Executive Carrie Lam described the protests as riots and urged a return to order.

"I hope society will return to order quickly and no one gets hurt in riots again," she said. "I urge everyone who loves this place to stay away from violence. I believe Hong Kong, as a civilized society, can use peaceful and rational methods to solve any problems."

The latest round of protests came as Lam continued to push for passage of the extradition bill. The president of the legislature, Andrew Leung, announced on Wednesday morning that debate on the bill had been postponed. Leung did not say how long the delay would last or whether a vote on the bill, which had been expected on June 20, would be affected.

The bill has been at the center of Hong Kong's political debate in recent months as the government moved to plug what it calls a loophole exposed by a homicide case. The government was not able to transfer a Hong Kong man accused of killing his pregnant girlfriend in Taiwan because of the lack of an extradition agreement with the island. Hong Kong currently has extradition treaties with only about 20 jurisdictions around the world, and mainland China, Taiwan and Macao are not among them.

Opponents of the legislation say the bill would pave the way for fugitives to be sent to mainland China, where many legal experts believe suspects will not receive a fair trial given the Communist Party's control over the courts. Opponents also say the proposed law would undermine Hong Kong's autonomy and damage its competitiveness as a financial hub.

The Hang Seng Index fell 1.7% on Wednesday, with the protests partly weighing on trading activity.

Wednesday's protests were reminiscent of the 2014 Occupy Central movement, also known as the Umbrella Movement, when activists blocked and camped out on major roads in Hong Kong's major government, business and commercial areas for 79 days to press the government to implement universal suffrage for the election of the city's leader. 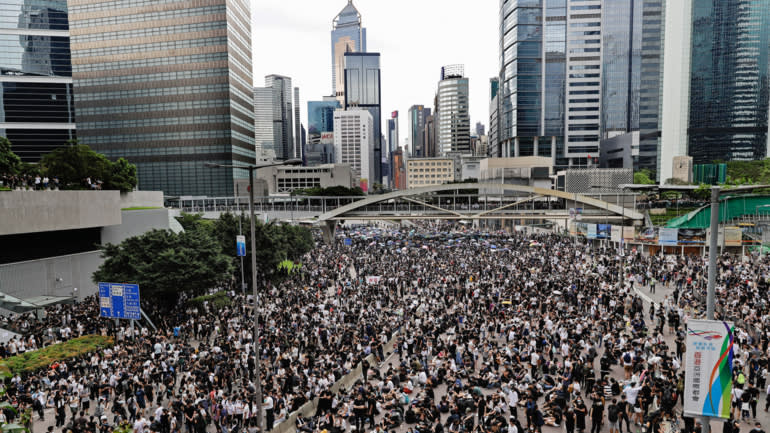 Many businesses, including major financial service companies such as HSBC Holdings, Standard Chartered, Deloitte and Ernst & Young, told their employees to work from home due to safety concerns. Many small shops in the area also were closed -- a move considered by some as tacit permission for their workers to join the protest.

The Chinese government on Wednesday reiterated its support for the extradition law that would allow suspects to be sent to mainland China for trial. "Any move to undermine Hong Kong's prosperity and stability is opposed by the mainstream public opinion there," Foreign Ministry spokesman Geng Shuang told a news conference in Beijing.

The mostly young protesters say they are angry that the Hong Kong government is ignoring the voice of the people following a massive march on Sunday that organizers say drew more than 1 million people into the streets.

"I was little when Occupy Central happened," said 18-year-old Tracy Wu, who joined Wednesday's demonstration. "I don't know if protesting now will make a difference, but I'll regret it if I did not do it."

"The Hong Kong government has legal obligations to protect human rights, which would be impossible if the planned amendments to the extradition bill go ahead," Eve told the Nikkei Asian Review, adding that the government should "listen to the overwhelming chorus of voices" speaking out against the bill and "halt this undemocratic push."