A pragmatic approach to the ideal of Taiwan independence 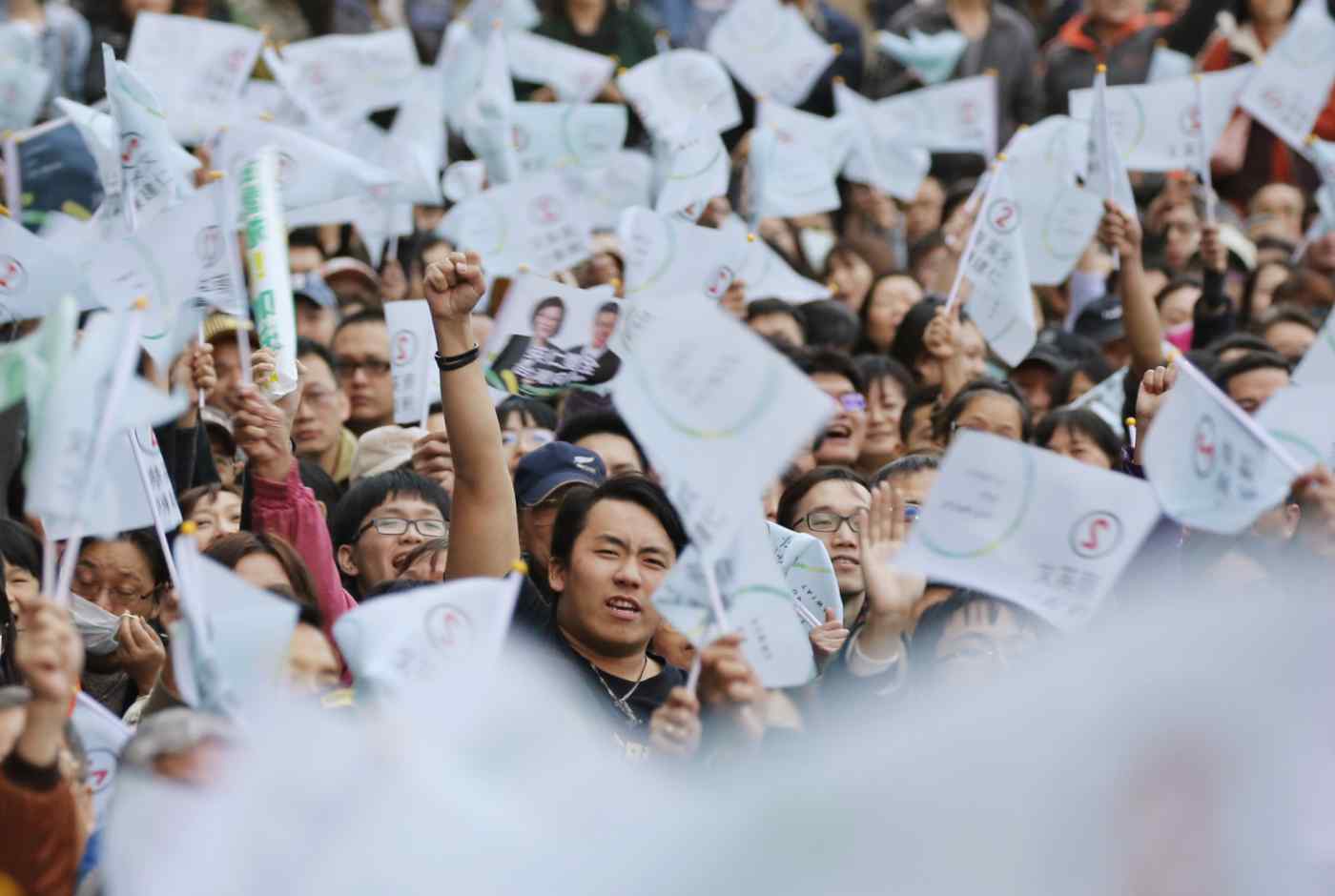 TAIPEI   The resounding victory of Tsai Ing-wen and her pro-independence Democratic Progressive Party in Taiwan's recent election reflects just how dramatically public sentiment toward mainland China has changed in the past two years.

Tsai, who will become Taiwan's first female leader when she is sworn in as president in May, led her party to its first-ever parliamentary majority in the Jan. 16 polls. Growing concerns about the collective identity of the island's 23 million inhabitants helped oust the ruling Kuomintang (KMT), or Nationalist Party. Young voters, in particular, worried that the KMT's efforts to deepen trade ties with China have hurt their livelihoods and threatened the island's political independence, threw their support behind the DPP.

"As long as the KMT does not fall, Taiwan will not grow" was an oft-repeated mantra among young people, both online and off, during the campaign. Tsai is well-aware of their anxiety.

In her victory speech on the night of Jan. 16, she first highlighted her pledge to safeguard Taiwan's sovereignty before reiterating her promise to maintain peaceful ties with China.

"People expect a government that can lead this country into a new generation and a government that is steadfast in protecting this country's sovereignty," Tsai said. "Following the will and consensus of the Taiwanese people, we will work to maintain the status quo for peace and stability across the Taiwan Strait, in order to bring the greatest benefits and well-being to the Taiwanese people."

Following Tsai's remarks, Beijing immediately repeated its insistence that Taiwan and China are part of the same country.

"We will continue to stick with the '1992 Consensus' and oppose steadfastly any separatist activities of 'Taiwan independence,'" China's Taiwan Affairs Office said.

The 1992 Consensus is a disputed principle supported by the Chinese Communist Party and the outgoing KMT that states both the island and the mainland belong to a single China. Tsai and the DPP, however, do not recognize the principle.

RECORD RESULT   Tsai cruised to victory, garnering 6.89 million votes, or 56.1% of the total. Both figures are a record for a DPP candidate in a presidential election. Her main rival, Eric Chu of the KMT, won 3.81 million votes, while James Soong of the China-friendly People First Party, received 1.57 million votes.

Coincidentally, Tsai won about the same number of votes as outgoing Nationalist President Ma Ying-jeou did in 2012 when the two ran against each other. Tsai lost that election by some 800,000 votes, as a majority of Taiwanese still backed Ma's efforts to bolster ties with China, whose economy was growing more than 7% annually.

In the parliamentary elections, the DPP clinched 68 seats, while the KMT was left with 35 seats. The rest went to an independent and smaller parties, including the pro-independence New Power Party and Soong's PFP.

Chu, who announced his resignation as chairman of the KMT immediately after its crushing defeat, said the party had lost touch with voters.

"We have to figure out ... why there is such great a chasm between the party and popular sentiment and whether there are major problems with our policy, our talent deployment and our communication with society," Chu said.

Many attribute the KMT's downfall to Ma's focus on strengthening cross-strait ties -- the outgoing president signed 23 bilateral agreements with China during his eight-year term -- while neglecting domestic issues such food safety and an economic stagnation that has trapped many young people in low-paying jobs.

A string of protests against Ma's government took place during his second term. Simmering public anger came to a head in the Sunflower Movement of early 2014, when students occupied the parliamentary buildings for three weeks to protest the KMT's attempt to pass a cross-strait services trade agreement without following normal legislative procedure.

The KMT was routed in key mayoral elections in November of that year, foreshadowing its most recent electoral embarrassment.

"Ma's problems are not so much about cross-strait relations but rather about domestic issues, and everything the KMT has done in this campaigns shows that they continue to be out of touch and hopeless," said Shelley Rigger, a political scientist at Davidson College in the U.S. state of North Carolina.

Tsai's election marks the third time the island has witnessed a power transfer since the KMT fled the mainland after its defeat to the Chinese Communist Party in 1949. The KMT imposed strict one-party rule until 1987, when it lifted martial law and allowed the formation of other parties. The island held its first direct presidential election only in 1996.

CALCULATED RESTRAINT   The KMT lost power for the first time, to Chen Shui-bian of the DPP, in 2000. Chen got elected on promises to eradicate corruption from local politics, but he later resorted to anti-China populism and was himself jailed for corruption after stepping down in 2008.

That same year, the KMT handed the DPP a crushing defeat in the presidential election, with Ma winning a record 7.88 million votes.

At a time when no one wanted to touch a party in shambles, Tsai stepped in and gradually revived the DPP. After failing in her first attempt to challenge Ma in 2012, she spent much time visiting voters around Taiwan and fostering better ties with Washington and Tokyo.

Those efforts paid off, as did her restraint on cross-strait affairs, which stood in stark contrast to Beijing's provocative actions in the South China Sea.

China's land reclamation and other activities in the disputed waters have alarmed other claimants, including Vietnam and the Philippines. According to some DPP officials, rising tensions have benefited Tsai, as neighboring countries and the U.S. have become increasingly wary of Beijing. Her highly successful trip to the U.S. in 2015 to meet with senior diplomats and White House officials is evidence that this is indeed the case.

"We share with the Taiwan people a profound interest in the continuation of cross-strait peace and stability," State Department spokesman John Kirby said in a statement on Jan. 16. "We look forward to working with Dr. Tsai and Taiwan's leaders from all parties to advance our many common interests and further strengthen the unofficial relationship between the United States and the people on Taiwan."

ANGRY YOUTH   At the same time, several DPP officials have admitted that one of their party's biggest advantages in the recent election came not from its own merits but rather from young voters' antipathy toward the KMT.

"The young generation has reservations about China, and their pursuit of a better democracy, social justice and a Taiwan-centered identity will have an impact on Taiwan's party politics," Cheng Wen-tsan, DPP mayor of the northern city of Taoyuan, said ahead of the elections. "Neither the KMT nor Beijing understands Taiwanese young people, while Chairwoman Tsai has a much better grasp of what they want."

An incident on the eve of the election illustrated the widening political divide between Taiwan and China. Chou Tzu-yu, a Taiwanese popstar attempting to develop a fan base in China, apologized for posing with a Taiwanese flag. In a short, scripted video posted online on Jan. 15, Chou said she is proud to be Chinese and apologized sorry for "hurting the feelings" of people on both sides of the strait.

The video went viral, with many in Taiwan saying on Facebook that Chou looked like "an Islamic State victim about to be beheaded" and urging others to vote for any party other than the KMT.

"If Beijing is trying to deter independence, they have succeeded, but if Beijing is to trying to achieve unification, it is only pushing Taiwanese farther [away] than ever," said Rigger of Davidson College.

The DPP's views toward China, however, have evolved over the years. This can be seen in Tsai's departure from her predecessor Chen's controversial push for de jure independence during his second term, from 2004 to 2008.

Instead, Tsai has focused on preserving Taiwan's democratic government and de facto independence. This restrained approach -- aimed at minimizing the risk of conflict with either Beijing or Washington while still championing the belief of the majority of Taiwanese -- helped her win over moderate voters.

"Tsai is being very prudent and cautious, and she is trying very hard not to make any mistakes," said Ting Yun-kung, director general of Information Bureau for DPP-controlled Kaohsiung City in southern Taiwan. "The elections are more about people's own awakenings, and the DPP is trying to follow where the public sentiment is flowing, but it no longer wishes to become the herald or creator of a new trend."

Yet Tsai's shift from the DPP's steadfast support for Taiwan independence to a more middle-of-the-road stance could eventually cause it to fall out of favor with a new generation of voters, according to some observers.

"Young people do not trust the KMT or believe in the DPP," said Lin Fei-fan, a key Sunflower Movement leader. "The younger generation has realized that they do not need to rely on the KMT or DPP to determine what they want in policies."

UNIVERSAL PRAGMATISM   Still, the public largely recognizes that Taiwan cannot afford to turn its back on the world's second-largest economy, and even the staunchly pro-independence New Power Party, which Lin supports, says it is not opposed to exchanges with China.

Joseph Wong, a political scientist at the University of Toronto, said Taiwan is entering a "new normal" in terms of cross-strait relations.

"Taiwanese are departing from the polarizing categories of independence and pro-unification," Wong said. "The vast majority of Taiwanese people are finding themselves in the middle of figuring out new ways to deal with China."