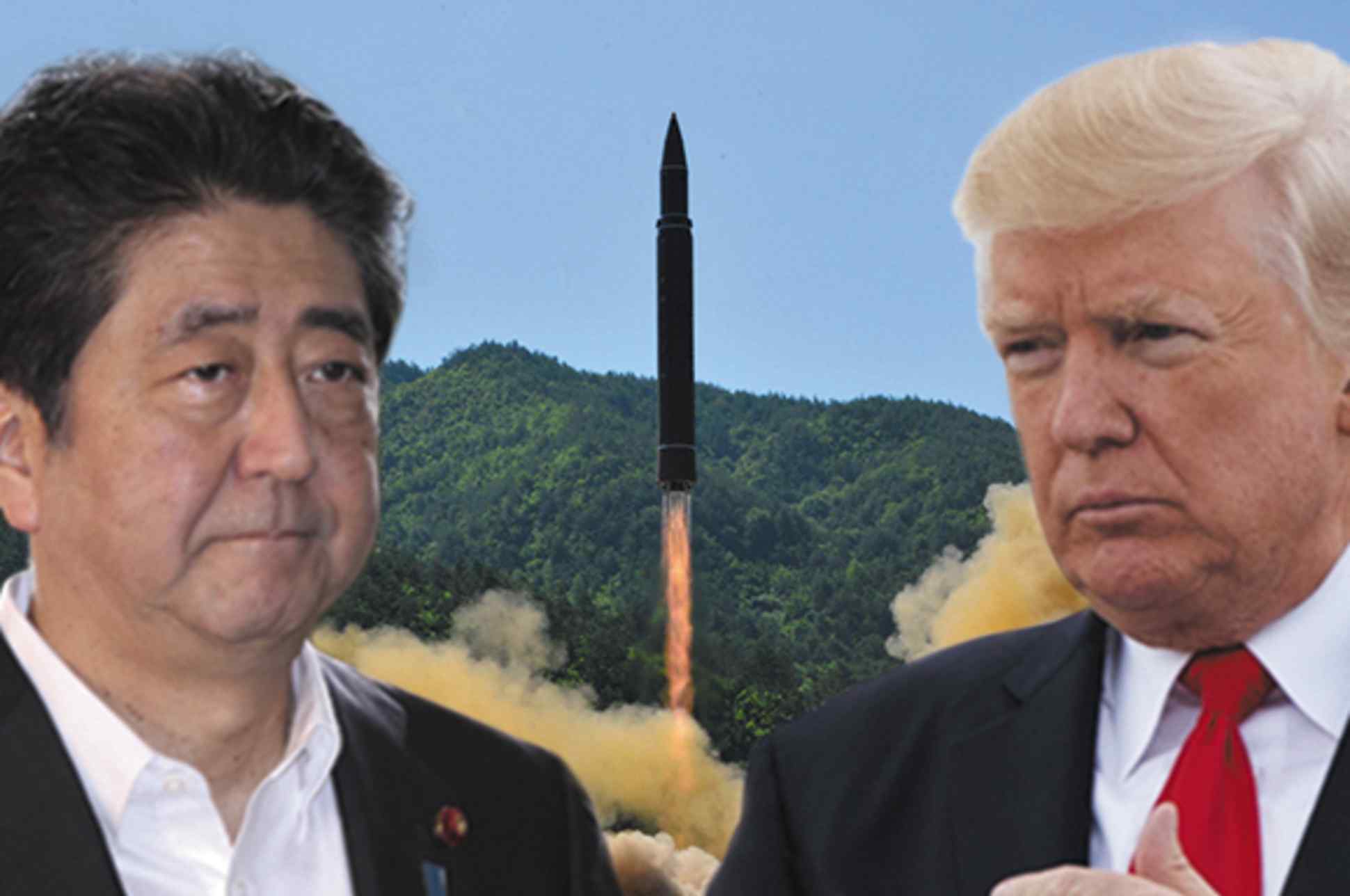 The two spoke on the phone for 52 minutes in what Abe described as "in depth" discussions. After the conversation, Abe told reporters that Japan will "take concrete measures to protect [its] citizens against the threat" from North Korea.

The prime minister added that the two countries had closely cooperated with each other and the international community to resolve the North Korea problem in a peaceful manner, but that Pyongyang had "entirely betrayed" those efforts and escalated the situation. "Countries such as China and Russia, as well as the international community, need to pay attention to this fact, and need to up the pressure," he said.

Trump, for his part, told Abe that he was worried by the fact the missile landed just 150km northwest of Okushiri Island, off Hokkaido, and stressed that the U.S. commitment to Japan's security remained solid.

The two leaders agreed that concrete measures need to be taken to improve their defense capabilities and deter the North Korean threat, and that they would discuss what steps to take at the upcoming 2+2 meeting of the two country's defense and foreign ministers.

The phone conversation was in line with comments on Twitter by the U.S. ambassador to the United Nations, Nikki Haley, who said in a statement that "the time for talk is over."

She added that an additional Security Council resolution that does not significantly increase international pressure on North Korea "is of no value," and said "China must decide whether it is finally willing to take this vital step" to resolve the crisis.

"The danger the North Korean regime poses to international peace is now clear to all," Haley said.

Prior to the statement, Trump had said on Twitter that he was "very disappointed" with Beijing, saying it does "nothing for us ... just talk" and that China "could easily solve this problem." Pyongyang tested a Hwasong-14 ICBM on Friday at 11:42 p.m. Japan time, its second ICBM launch since July 4. It called the test successful and said it proved the country's ability to strike the U.S. mainland. A late-night launch is unusual and all 11 ballistic missile tests so far this year were conducted in the morning, except for a May 21 launch in the early evening.

The missile was also launched from a site in Jagang Province, not a location in North Pyongan Province where activity had been detected before the launch.

"The launch was timed to take place in the morning in the U.S.," said Kim Dong-yup, a professor at the University of North Korean Studies in Seoul. Pyongyang's ultimate goal is to make the regime immune to a U.S. attack and ensure its survival. The launch was likely meant to send a message to Washington.

The Jagang site may have been used with actual deployment in mind. The location "is in mountainous terrain, close to the border with China, so it is difficult for the U.S. to hit it with a pre-emptive strike," said Park Hwee-rhak at Kookmin University.

Japan, South Korea and the U.S. are hurrying to strengthen their missile defenses. Japan employs a two-stage shield that includes Standard Missile-3 interceptors fired from Aegis Combat System-equipped warships, and land-based Patriot Advanced Capability-3 interceptors. But intercepting a missile flying at high altitude like the one launched on Friday would be difficult.

North Korea has also gotten better at surprise launches and firing multiple missiles. Japan is considering deploying the Aegis Ashore, a land-based version of the Aegis Combat System. Tokyo also is developing the SM-3 Block IIA long-range interceptor with the U.S., but that system is not likely to be ready for years.

Seoul has recently changed course, deciding to beef up deployment of the advanced Terminal High Altitude Area Defense anti-missile system by U.S. forces in South Korea. President Moon Jae-in has instructed that four additional THAAD launchers be put in place, along with the two already in operation, as an emergency measure. U.S. forces earlier began operating the two launchers, with their powerful radar, in South Korea, but the other four had been delayed.