Abe and Trump reiterate their hard line on North Korea 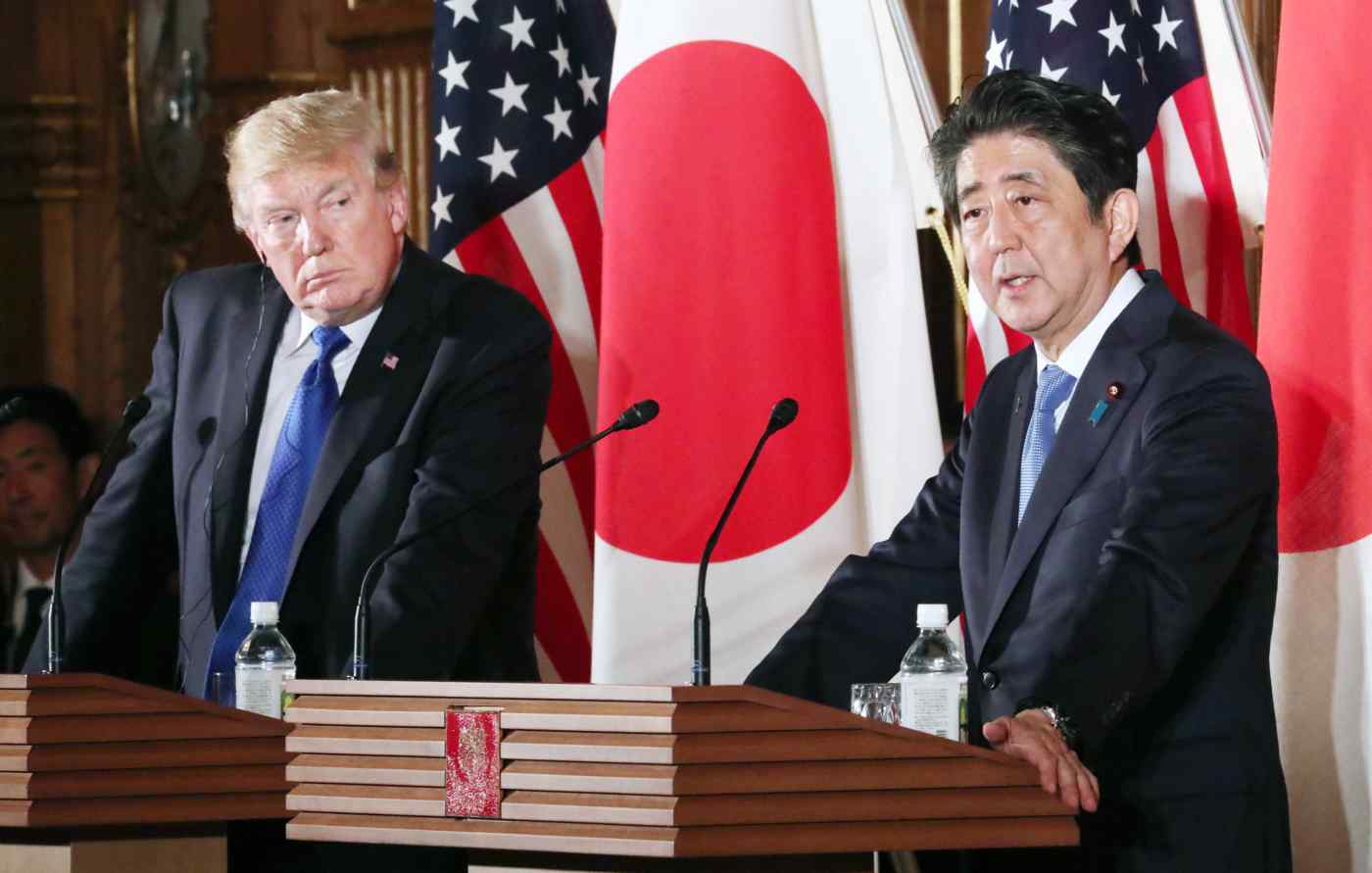 TOKYO Japanese Prime Minister Shinzo Abe and U.S. President Donald Trump once again reaffirmed cooperation in containing the North Korean nuclear threat, and now the American leader will travel to neighboring Asian countries to convince them of the merits of their "maximum pressure" strategy.

"We were in complete agreement as to the measures to be taken upon the analysis of the latest situation" involving North Korea, Abe told reporters during a joint news conference on Nov. 6 following his summit with Trump.

Trump followed up on Abe's comments. "We're working to counter the dangerous aggressions of the regime in North Korea," he said. "The era of strategic patience is over."

PRIVATE MILITARY TALKS Many in the Japanese government believe the international sanctions on Pyongyang will begin to bite in cold weather. "There is a possibility that tensions between the U.S. and North Korea will escalate when Trump's Asia tour ends in mid-November," said a government official.

The pain of the sanctions could spur the rogue regime to toughen its already hard-line stance against the global community, one theory goes. That North Korea topped the agenda at the Abe-Trump summit suggests there is an understanding that the situation is reaching a critical stage.

During the follow-up news conference, both leaders avoided clarifying whether a military response is possible. Sources on the Tokyo side revealed that talks did not cover the idea of withdrawing Japanese citizens from the Korean Peninsula during an emergency, but they were unwilling to discuss any related details.

Trump repeatedly has said all options are on the table, and Abe has wasted no opportunity to say that Japan backs the U.S. stance "100%."

H.R. McMaster, the U.S. national security adviser, said in a recent interview with The Nikkei and others that it would be irresponsible for partner states not to discuss the possibility of military efforts. 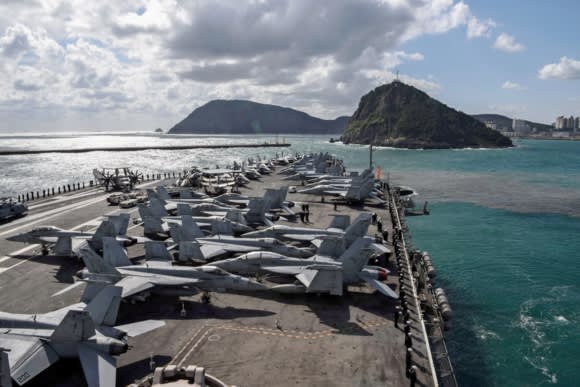 The aircraft carrier USS Ronald Reagan maneuvers along the east of the Korean Peninsula prior to a scheduled port visit in Busan, South Korea, on Oct. 21.   © Reuters

Japanese officials, however, remain tight-lipped. "Even if they did come up during the talks, the Japanese side does not intend to publicize any discussions that bring to mind U.S. military activities," said a source close to Japan's government.

Having a layer of mystery surrounding the talks may serve to restrain Pyongyang, a senior government official said.

Sharing understanding on what to do about North Korea is meaningful. But if a conflict erupts, then Tokyo can no longer distance itself from U.S. military action -- a fact that is spurring the Japanese side to try to find out how serious Trump is about his threats against Pyongyang.

Abe instructed his aides to set Trump's schedule in a way that would allow him and a few others to have long conversations with the president. "It is important that there are opportunities for discussions without diplomatic niceties," the prime minister said. Not only was Abe with Trump during a round of golf and dinner on Nov. 5, the two leaders also rode in the same car to the restaurant.

Such small-group discussions focused on North Korea, people familiar with the talks say. After the dinner, Abe told his inner circle, "I feel I'm able to see considerably better how Mr. Trump intends to deal with North Korea."

BRINGING OTHERS ON BOARD Japan was the first leg of Trump's 12-day Asian tour. The president visits South Korea on Nov. 7, followed by China, Vietnam and the Philippines. Trump will meet with President Xi Jinping in China and with Russian President Vladimir Putin during the Asia-Pacific Economic Cooperation forum in Vietnam.

Trump is expected to press Xi and Putin to increase pressure on North Korea.

But China remains less than willing to intensify sanctions against Pyongyang. South Korea is not in favor of forming a united front against the hermit state either, as President Moon Jae-in presents his country's northern neighbor with various olive branches.

Russia may figure in Trump's uncompromising stance against North Korea in an entirely different sense. The White House is embroiled in a scandal surrounding Moscow's apparent meddling in last year's U.S. presidential election, as well as suspected ties between Trump's campaign and Russia.

The scandal has contributed to an erosion in Trump's approval rating, and many see his tough rhetoric against North Korean leader Kim Jong Un as a way to shore up support at home.

But too hard of a line by the U.S. against North Korea is a "double-edged sword," said a senior official in Japan's Ministry of Foreign Affairs. One purpose of the Abe-Trump summit was to prevent "his foreign policies from wavering," the source said.

"We wish to control [Trump] to a certain extent so that there is no reckless behavior," an Abe aide said.