Abe momentum could hit skids after paying respects at Yasukuni TOKYO -- Veteran Diet lawmakers have one piece of wisdom for new politicians: Avoid complacency. Prime Minister Shinzo Abe would have done well to heed that advice.

One wrong move can put a politician into an extremely tight situation. Abe's current situation is a case in point.

The prime minister was on track for a successful end to 2013 on the diplomatic front. His geopolitical strategy was solid. He kept his eye firmly on China, which was acting increasingly boldly in the East and South China seas. He strengthened the Japan-U.S. alliance, visited all Southeast Asian countries and held four meetings with Russian President Vladimir Putin. In the process, the prime minister secured agreements on security cooperation with one country after another.

Now he faces the possibility of self-inflicted damage because of his decision to visit Yasukuni Shrine, which honors the nation's war dead, including war criminals. In 1978, 14 Class A war criminals were enshrined at Yasukuni.

Abe's Dec. 26 visit to the shrine led to stern criticism from China and South Korea, which faced Japanese brutality during World War II. The negative reaction did not end there. The U.S. government expressed its disappointment with Abe's action. The Association of Southeast Asian Nations, with which the prime minister reaffirmed a strong bond at a Tokyo summit just days prior, did not hide its displeasure either.

"Prime Minister Abe was prepared for the reaction from China and South Korea, but he was a little surprised by the negative comment from the U.S. government," one of his aides said.

Abe knew the visit would draw negative reaction from neighbors. He was hoping to contain the fallout as much as possible. He mentioned, for example, China and South Korea twice in comments issued after the shrine visit.

The visit aimed to demonstrate a resolve to usher in an age where people will never have to suffer from wars again, Abe claimed. He "had no intention of hurting the feelings of people in China and South Korea," he said, noting his aims to "build friendship with China and South Korea with respect."

According to high-ranking officials at Abe's ruling Liberal Democratic Party, the comment was drafted by the prime minister himself. Officials also revealed the U.S., South Korea, China and others had been informed of Abe's intention several hours before the visit took place.

The prime minister must have known his visit would have diplomatic repercussions. So why go to the shrine?

He put his personal convictions before practical politics.

Abe is often regarded as nationalistic. He likely believes that the way a leader honors the nation's war dead is an internal affair that has nothing to do with other countries. He has said he regretted not visiting the shrine during his first tenure as prime minister in 2006-2007.

If it was simply a matter of acting on convictions, why visit in late December? The date, which coincided with the one-year anniversary of his comeback as prime minister, appears to have been based on a political calculation.

According to close allies, it was the only window of time available for Abe to realize the goal of remaining in power for a long period while fulfilling his desire to visit the shrine at least once while he is prime minister. The term for the current Lower House members will not expire until December 2016. And there will be no Upper House election until the summer of that year.

This means Abe will be able to govern without facing any national election for three years, as long as he can maintain the loyalty of lawmakers in his party. His ambition is probably much stronger. He may want to extend his rule further by leading his party to national election victory in 2016. Abe will have to clear big hurdles in the next three years to realize this goal. 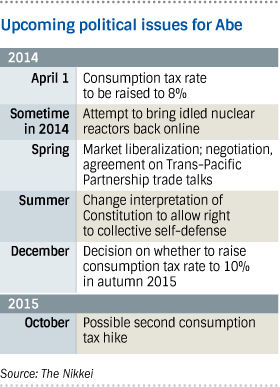 The political roadmap through 2015 shows Abe will have to put in place unpopular policies. After this spring, there will be little room for controversial action.

Aside from satisfying his own personal desire, his shrine visit may have been intended as a reassertion of Abe's conservative credentials.

"Abe was concerned that the LDP may lose some of its conservative supporters to the Japan Restoration Party and others if he continues to refrain from showing his true colors," one of his aides said.  "That is probably one of the factors that drove him to visit the shrine," the aide noted, emphasizing this was his personal speculation.

The Japan Restoration Party has a low approval rating because of comments by leader Toru Hashimoto on wartime sex slaves. The party could, however, become a uniting force for conservative politicians if opposition parties reorganize, as some predict. The emergence of a stronger conservative party could rattle the LDP's support base. The aide believes one of the motivations behind Abe's Yasukuni visit was to rally conservative voters and take potential momentum away from opposition parties.

It's the economy, stupid

Regardless, such a gambit will not help if Japan's relations with the U.S., Southeast Asia and Europe suffer as a result. If Japan becomes isolated in the international community, public support for the Abe administration will wane. The price of undermining national interest could be his leadership.

Chief Cabinet Secretary Yoshihide Suga and others in Abe's inner circle are now advising the prime minister to refocus his attention to the economy and keep a distance from issues that rekindle memories of Japan's war crimes. For now, the prime minister appears to be heeding that advice.

Pressing forward with Abenomics and rebuilding the Japanese economy, maintaining cooperation with the U.S., Southeast Asia, Australia and others, and building a security network with an eye on the rise of China will be key. Whether Abe makes progress on practical policies will impact not only the future of Japanese diplomacy, but also geopolitics in Asia.