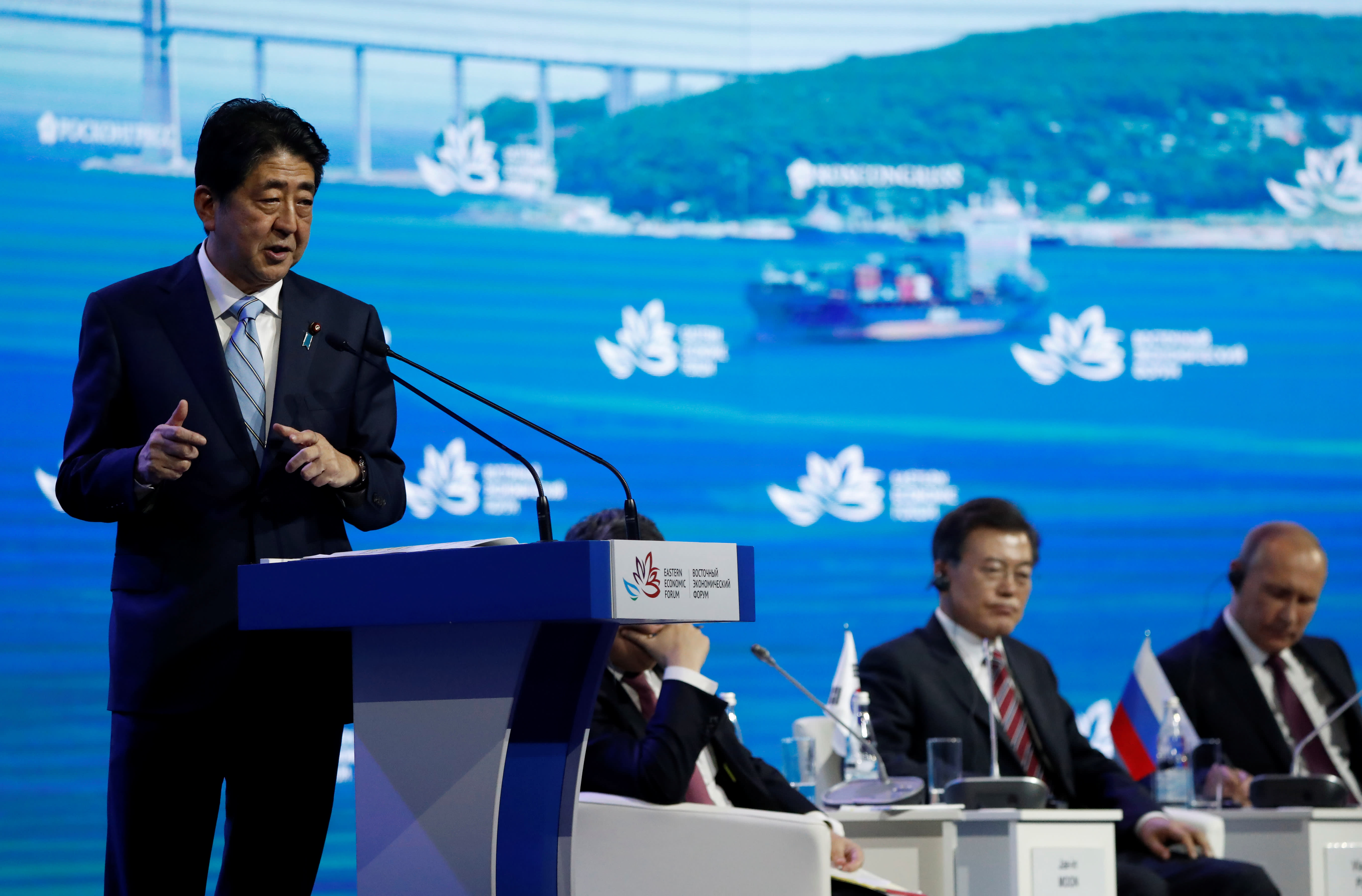 A little over a year ago, Japanese Prime Minister Shinzo Abe delighted his audience at the Russian-hosted Eastern Economic Forum in Vladivostok, by promising to return each year to oversee implementation of an eight-point plan for Japan-Russia economic cooperation. The Japanese leader had unveiled his initiative in May 2016 as part of his "new approach" to Russia.

True to his word, Abe was back in the port city on Sept. 6-7. Taking to the stage in front of Russian President Vladimir Putin, Abe heralded the "new era" in Japan-Russia relations and proclaimed that more progress had been made during the last 12 months than in the previous 70 years.

At first glance, the results of Abe's latest trip to Vladivostok are impressive. Most striking is the agreement to pursue five priority projects as part of a plan for joint economic activities on the disputed Southern Kuril Islands. The selected projects relate to aquaculture, greenhouse farming, package tours, wind power, and waste reduction.

The significance of these projects is not their economic value but Japan's hope that they will be implemented under a "special system" distinct from Russian law. Abe believes he reached an understanding with Putin on this issue when the Russian leader visited Japan in December 2016. Such joint economic activities would permit Japanese to return to the islands in a meaningful way for the first time in over seven decades.

The Japanese leader can also claim some progress in broader economic exchange. During the Vladivostok forum, a total of 56 commercial and intergovernmental documents were signed between Japan and Russia. These included agreements on eliminating double taxation and on cooperation in the digital economy. An investment fund of $1 billion was also promoted to support joint projects in the eight priority areas, which include health, urban infrastructure and energy. Putin also announced that the two sides were working toward the Russian nuclear industry assisting Japan with the Fukushima clean-up.

As well as the hope that these projects will prove mutually beneficial, this economic cooperation is intended to play a political role. Specifically, Abe's "new approach" is based on the idea that increased commercial ties and frequent summits can be used to generate a positive dynamic in bilateral relations. This, in turn, will help facilitate a breakthrough in territorial negotiations and ultimately open the way to a peace treaty formally ending World War II between the two countries.

During his meeting with Putin, Abe also secured the Russian leader's agreement that North Korea's test of an apparent hydrogen bomb on Sept. 3 represented "a serious threat to the peace and stability of the Korean peninsula as well as the region, and a grave challenge to the global non-proliferation regime."

In the interests of enlisting further cooperation from Russia, Japanese officials confirmed that Tokyo would host Oleg Salyukov, commander-in-chief of the Russian land forces, in November, followed by Valery Gerasimov, chief of the Russian general staff, in December.

Presented this way, Abe's Vladivostok trip appears to have been a resounding success. A closer look, however, reveals that there is actually less here than meets the eye.

Most importantly, the joint economic activities on the disputed islands are far from a done deal. The two sides have now identified specific projects and another survey visit is planned for October. Yet this is to place the cart before the horse.

So long as the question of legal jurisdiction has not been resolved, the economic projects cannot proceed since there is no agreement on which courts would hear commercial disputes and to which authority taxes would be paid. It is also unclear what status Japanese workers would have since Tokyo will not accept a visa requirement, which would acknowledge Russian sovereignty.

In theory, these legal issues can be overcome and it was agreed at the Vladivostok meeting that working groups would be established to address them. Yet it is far from clear that Russia is really willing to agree to a "special system" on the islands for Japan. On many occasions since December 2016, Russian officials have insisted that any joint economic activities must be consistent with Russian law.

This stance was reinforced on Aug. 23 when Russian Prime Minister Dmitry Medvedev authorized the creation of a special economic zone on Shikotan, the third largest of the disputed islands. Offering tax breaks and reduced regulation, the zone is in principle open to Japanese investment. But since the special economic zone operates under Russian law, the move appears inconsistent with the plan for joint economic activities.

It is also notable that Shikotan is one of the two islands that Moscow has previously offered to transfer to Japan after the signing of a peace treaty. The creation of the special economic zone therefore raises new doubts about Russia's willingness to fulfil that commitment.

Another possible setback followed at the end of the Vladivostok summit when Russian Deputy Prime Minister Yury Trutnev warned that Japan had just two months to move forward with investment on the Southern Kurils, after which Russia would proceed without it. The intention is evidently to pressure Japan into engaging on the islands on Russia's terms.

Beyond the territorial dispute, the broader plans for economic cooperation also disappoint. Although the Russia-Japan business dialogue was the largest such session at the Eastern Economic Forum, there was a lack of concrete progress in major economic projects. Instead, officials spent much time discussing hypothetical megaprojects, such as a bridge from Sakhalin to Hokkaido, or worthy but minor initiatives, such as cooperation in improving parcel delivery and traffic light sequencing.

This lack of more substantive accomplishments appears to have become a point of frustration for Putin, who claimed that "80% of investment in the Russian Far East is from China." He also archly suggested that Japan might consider upgrading its post of minister for economic cooperation with Russia to the level of deputy prime minister.

Lastly, it has often been remarked that an underlying aim of Abe's "new approach" has been to encourage Russia to distance itself from China and to play a more constructive role in upholding regional security. Yet, if this is the strategy, there are few signs of it succeeding. While Abe used his speech at the forum to call for increased pressure on North Korea, Putin rebuffed the suggestion, saying that, "It is impossible to intimidate North Korea. Certainly, they engage in provocations but they are not stupid. Why play their game? We must avoid hysteria." In this respect, Russia's position remains distant from Japan's and closely aligned with that of China.

Overall, despite Abe having now met with Putin 19 times, the achievements of his "new approach" remain more rhetorical than real. The leaders will meet again at the Asia Pacific Economic Cooperation summit in November but, at present, there seems little basis to think it will prove 20th time lucky.

James D.J. Brown is an associate professor in political science at Temple University in Tokyo and a specialist on Russo-Japanese relations.