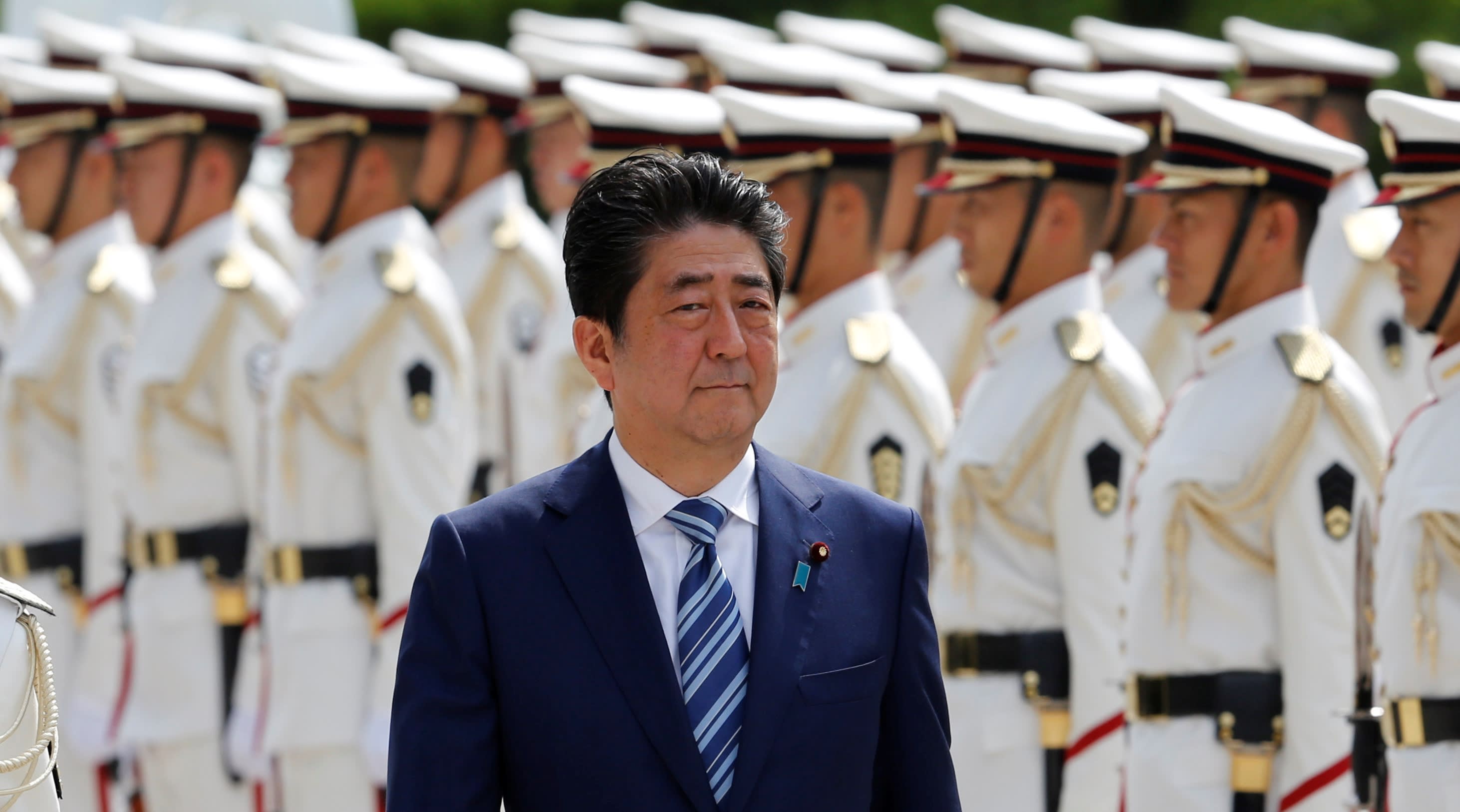 TOKYO -- Japanese Prime Minister Shinzo Abe is framing constitutional change as the defining issue of the ruling Liberal Democratic Party's leadership race next month, hoping that his win will silence those questioning his approach to rewriting the pacifist charter.

"We should accelerate our efforts so we can submit a proposal to change the constitution to the next Diet session," Abe said in a speech on Sunday in his home prefecture of Yamaguchi.

"I hope that the LDP leadership race will provide an opportunity for party members to advance the debate and form a united front," he said.

Abe hopes a win over former Defense Minister Shigeru Ishiba, a vocal critic of Abe's revision proposal, in the presidential race will help end the internal debate. This will enable him to submit a charter-amending proposal to the Diet session in the fall.

The ruling party in March adopted a proposal to write the Self-Defense Forces into the constitution's Article 9 without removing existing language barring the maintenance of "land, sea, and air forces, as well as other war potential." Abe advocates this approach, seen as an easier route to winning public support.

Ishiba and some other party members support an outright removal of the ban on maintaining a military, replacing it with a sentence that Japan maintains "Ground, Maritime and Air Self-Defense Forces."

The LDP's proposal "logically makes no sense," Ishiba told Nikkei on Monday. As long as the existing language remains in place, debate will continue on whether the SDF counts as "war potential" and whether Japan retains the right to wage war, he argued.

He dismissed Abe's argument that the revision is to legitimize the SDF. "The public in general does not think the SDF is unconstitutional," Ishiba said.

Abe, who is expected to win re-election, will have to step down in September 2021 at the end of his third consecutive term. Given this, he believes keeping his conservative base engaged through his push for constitutional revisions will prevent him from becoming a lame duck.

But challenges remain. First, Abe must get junior coalition partner Komeito on board within the ruling coalition. Key Komeito backer Soka Gakkai, a lay Buddhist organization, is reluctant to alter the pacifist constitution. The party in particular does not want the issue front and center in the regional and upper house races of 2019.

"It could make things difficult for us" if the LDP initiates a motion for constitutional revisions in the Diet next year, a Komeito official said.

Lawmakers in favor of revising the charter control more than two-thirds of the seats in both houses of the Diet -- the necessary threshold to get the ball rolling on the motion. But the pro-revision camp could lose its two-thirds majority in the upper house next year. "We will definitely lose seats in the upper house race next summer," a source close to Abe said.

Logistical issues could also arise if a referendum -- a necessary step in changing the constitution -- comes around the same time as the upper house race next summer. For example, Japan bans door-to-door canvassing and limits the number of posters and flyers per candidate in national elections. But popular referendums do not face the same restrictions, a loophole that candidates could try to exploit in their own campaigns.

On top of all this, Emperor Akihito is abdicating next year to make way for his son, Crown Prince Naruhito. Some in the government think they should prioritize a smooth transition and leave the constitution for later.