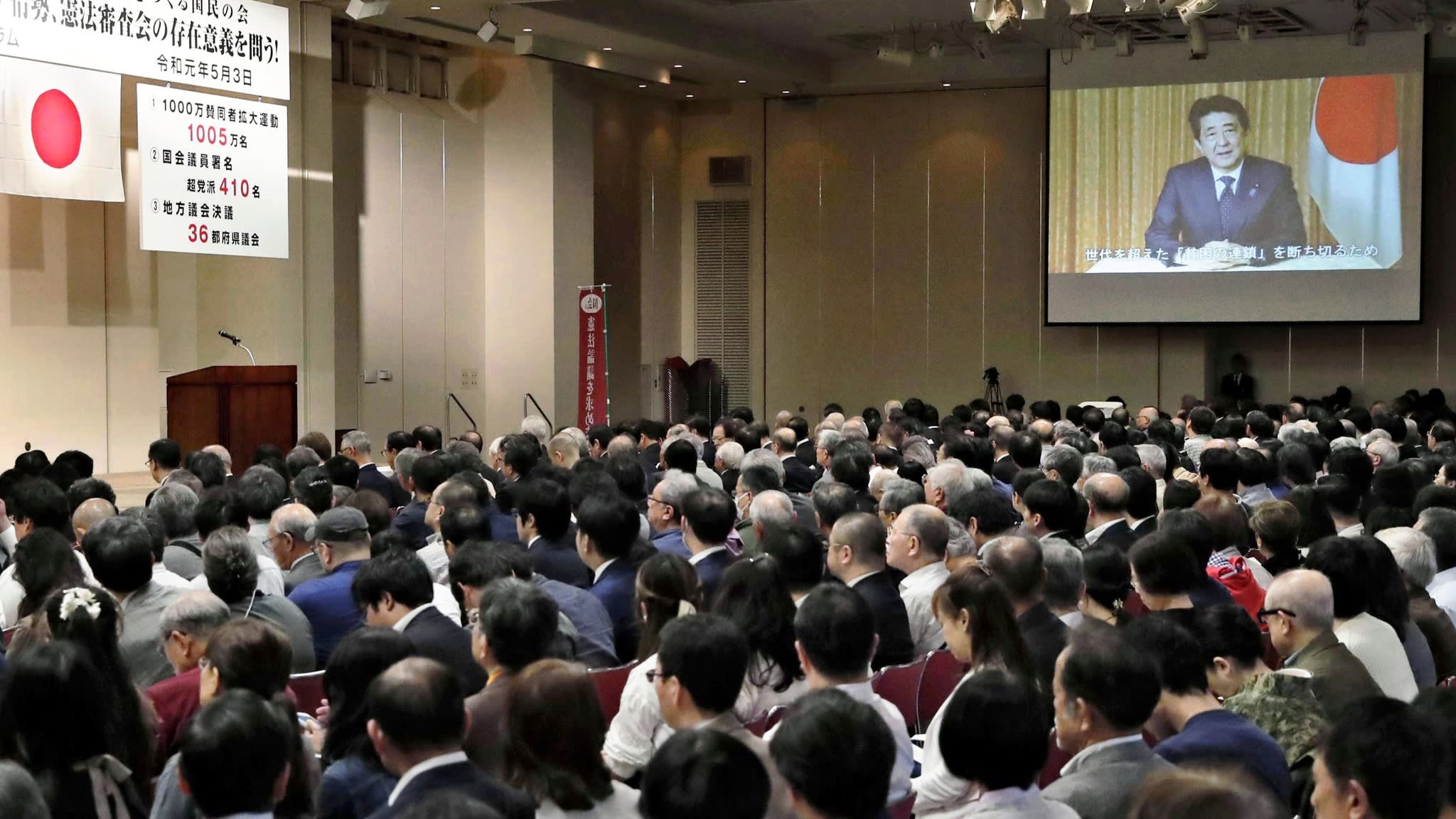 TOKYO -- Marking the 72nd anniversary of Japan's post-war constitution taking effect, Prime Minister Shinzo Abe on Friday reiterated his resolve to revise the pacifist charter by the end of next year.

In a prerecorded message shown on the first Constitution Memorial Day of the new Reiwa era, Abe recalled his pledge two years earlier to have a new constitution take effect in 2020.

"My feelings have not changed since then," he said.

The role of the Self-Defense Forces must be written into the charter's war-renouncing Article 9 in order to "put an end to the debate over its constitutionality," the prime minister said. The message was shown at a rally that called for revising the charter.

"We'll create an environment where all SDF members can carry out their duties with pride," Abe said.

The prime minister also discussed another change proposed by his Liberal Democratic Party, one that would require the government to provide better educational opportunities.

"We will implement free college education for children in need," he said in the message.

"We will make education open to all children regardless of their household's economic circumstances," Abe said. "We must establish this firmly in the constitution."

The LDP's draft charter also includes provisions on electoral reform and emergency powers for the cabinet.

Abe called for parliament to begin debate on the proposed changes, without providing a specific time frame.

"We stand at the starting point of a new era, the first year of Reiwa, and the time has come to directly discuss what this country's future should look like," he said.

Hakubun Shimomura, head of an LDP body on revising the constitution and a former education minister, told reporters after the prerecorded speech that the party would "take his comments to heart and work to realize" his goals.

"If the issue of free education is tackled head-on, then Ishin will work hand in hand with the LDP, including on revising Article 9," he said.

But Komeito, the LDP's partner in the ruling coalition, remains less than enthusiastic.

"We're not quite ready to accept" writing the SDF into the charter, given the arguments for its unconstitutionality, Kazuo Kitagawa, head of Komeito's committee on constitutional issues, said in an NHK interview Friday.

"It's important to build a consensus first and not follow a predetermined schedule," Kitagawa said in a separate interview on Fuji Television.

"We will spearhead the effort to defeat the Abe administration in order to create a society where the government's powers are restrained by the constitution," Edano said.

DPP leader Yuichiro Tamaki expressed concern at the meeting that amending Article 9 would let the government "expand the scope of [Japan's] right to self-defense without limits."

"We should not begin debate on revising the constitution without overwhelming public support," Edano told reporters after the meeting.