Abe to declare emergencies across Japan today: What changes?

No road or rail restrictions, but cinemas, gyms and hotels to close 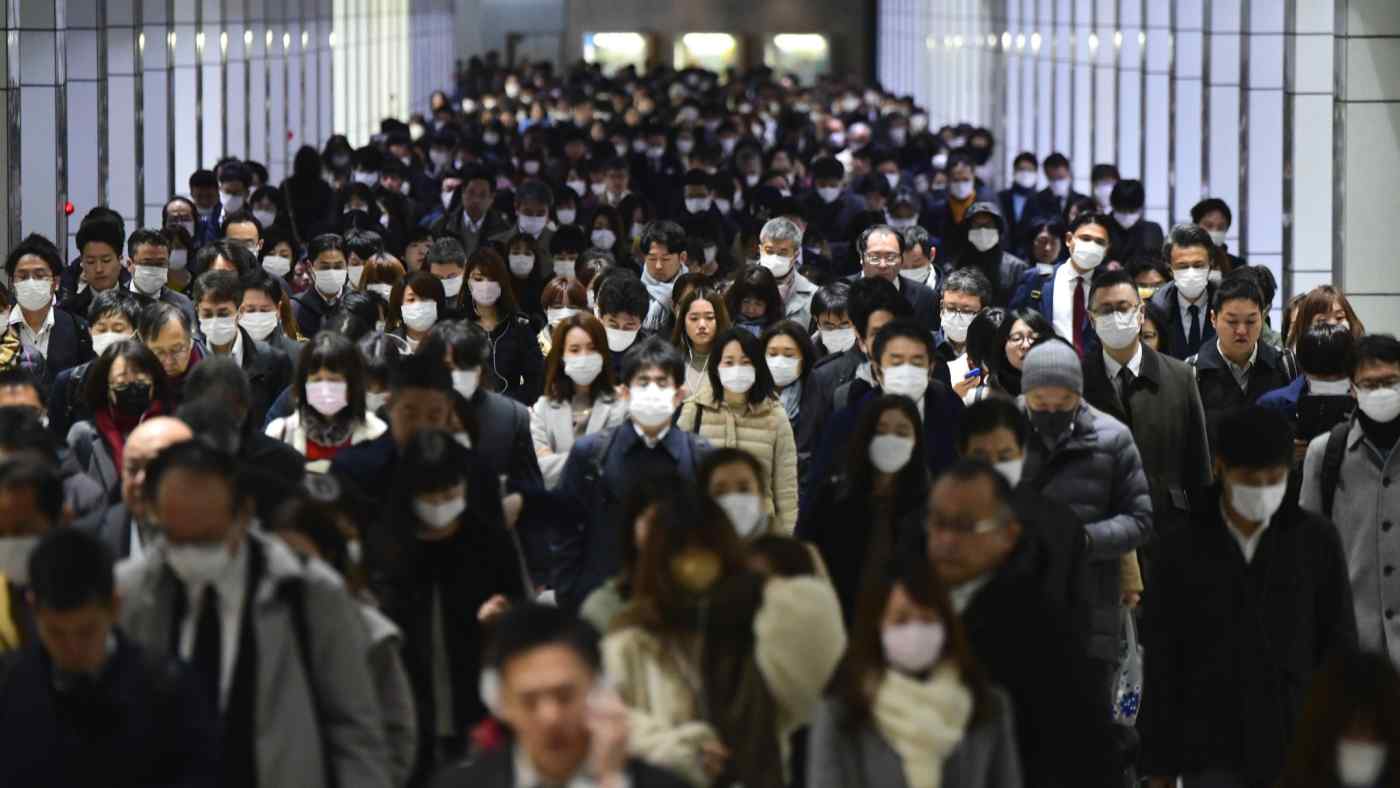 TOKYO -- Prime Minister Shinzo Abe is expected to declare a state of emergency Tuesday covering Japan's three most populous cities until May 6, escalating his government's response to the coronavirus pandemic.

Though this declaration grants greater authority to Japan's local governments, people will face lighter limits on their activity compared with the far-reaching and restrictive lockdowns imposed in Italy, the U.S. and other countries.

So what will Japan's state of emergency look like? Here are five things to know.

A state of emergency gives legal backing to requests by local authorities for the public to stay home. The declaration is based on a law originally designed for flu outbreaks, which was revised in March to cover the novel coronavirus.

The law does not allow for punishing those who fail to comply. Road and rail transportation will continue as normal, unlike in some other countries. Businesses such as supermarkets and banks that offer daily necessities will not face restrictions. The country's stock exchanges will remain open.

Perhaps the biggest change is that authorities can urge schools as well as cinemas, department stores and other places with more than 10,000 sq. meters of floor space to restrict the use of their facilities. Places that draw large crowds can face similar requests, though they also lack legal force. These decisions fall to prefectural governors like Tokyo's Yuriko Koike. The Tokyo government reportedly plans to close schools and ask establishments such as bars and karaoke halls to shut their doors. Child and elder care facilities would remain open. East Japan Railway, the operator of Tokyo's busy Yamanote line, said it has no plans at present to change service.

Beyond Tokyo, the emergency order will apply to six prefectures: Kanagawa, Saitama and Chiba, which surround the capital; Osaka and nearby Hyogo, where Kobe is located; and Fukuoka. Kanagawa is home to the city of Yokohama.

Municipal governments can commandeer sites to establish emergency medical facilities, and they can force companies to sell their supplies of food and medicine.

How many people are infected in Japan?

The number of confirmed COVID-19 cases has surged in recent days, though the pace of Japan's increase remains slower than in the U.S. and hard-hit European countries like Italy.

Japan experienced double-digit daily increases until March 27, and the number of new cases hit 336 on Sunday. Tokyo's new caseload surpassed 100 for the first time Saturday, and reached 143 on Sunday.

Japan had confirmed 3,654 COVID-19 cases, with 85 deaths, according to Johns Hopkins University's Coronavirus Research Center. That is around the same number of infected people as the Philippines and Malaysia but well below the 10,000 in South Korea, which has the second-highest number in Asia, after China. Why is an emergency being declared now?

Japan's efforts to counter the outbreak have relied largely on identifying where the virus has spread and isolating those in the infection "cluster." But the growing number of cases raises concern that this strategy no longer works.

The number of cases with unidentified infection routes has been rising, especially in large cities such as Tokyo and Osaka. Tokyo's 118 new cases Saturday include 81 with no known transmission route.

Japanese law makes it almost impossible for the government to force a shutdown similar to those in Paris and New York. The emergency declaration represents the closest Japan can get to a lockdown in combating the spread of the virus. Abe had stopped short of taking this step. Just two weeks ago, Japanese schools and businesses were looking to reopen gradually.

Preventing an explosion of infections is vital to avoid a breakdown of the medical system and buy time to put the necessary infrastructure in place.

Elsewhere in Asia, Singapore will start a four-week restraint period Tuesday, asking nonessential businesses to close until May 4.

How would it affect the economy?

The coronavirus pandemic has hurt business in various ways. The drop in foreign visitors has harmed the tourism, service and retail sectors, while domestic consumers are going out less. Official requests for self-quarantine and closures of some services would further depress restaurants as well as entertainment and retail.

An emergency declaration lasting into early May would span Japan's Golden Week, a stretch of public holidays that is normally a busy time for travel.

Abe on Monday called for an emergency economic stimulus package worth 108 trillion yen, or roughly $1 trillion.

A BNP Paribas report says an emergency declaration and calls for residents to stay in their homes would lead to a plunge in consumer spending and corporate investment.

Shinichi Nishioka, chief forecaster at the Japan Center for Economic Research, predicted that the country's gross domestic product would sink by as much as 0.5%, or 2.5 trillion yen, in a month from restrictions on business and consumer activities in Tokyo alone. The impact from similar restrictions covering the greater Tokyo and Osaka areas could reach 1.1%.

What are further challenges?

Japan's goal remains keeping hospitals from becoming overwhelmed with patients. This could easily occur if infections begin rising sharply, as in Europe and the U.S.

Tokyo estimates that if infections reach 20,000 in the capital, then 4,000 of those people -- at least 20% -- would require hospitalization, with 700 becoming severely ill.

But the capital currently has the capacity to accept only around 100 severely ill patients. Plans call for using nonmedical facilities such as hotels to house individuals with mild symptoms.

A similar story holds for the rest of the country. Though Japan has an estimated 6,500 intensive care units, only about 1,000 will be available for coronavirus patients, due mainly to personnel constraints, the Japanese Society of Intensive Care Medicine said.

The Japanese Society of Respiratory Care Medicine counts more than 13,000 available ventilators nationwide. But ensuring a sufficient supply of health care workers to operate such complex equipment remains in question.

Koike acknowledged a shortage of health care workers during an interview Friday. The city is asking licensed former staff to return to work and help the city overcome the impending crisis, the governor said.