Threats, jail time and death are the costs of standing up to Hun Sen's regime CHIANG MAI, Thailand Political opponents have been jailed or driven into exile, the media is muzzled and the voices of civil society are barely heard these days. Cambodia's authoritarian regime has swept clear the field of potential political rivals as Prime Minister Hun Sen prepares for general elections in July.

One such activist is Leng Ouch, who has been fighting against the rampant pillaging of forests he says is perpetrated by a ''business mafia'' in collusion with senior government officials. ''I am aware that I may not live much longer,'' he told the Nikkei Asian Review in a recent interview. ''But I will try to go on with my work in order to serve as a good model for young people, to engage people to protect the forests and environment."

Hun Sen's government also talks about the need to conserve the country's natural resources but has notched up a dismal record against those trying to protect them. In a rigorously researched report, the U.K.-based nongovernmental organization Global Witness in 2007 charged that family members and business associates of the prime minister were illegally destroying Cambodia's forests with immunity and reaping millions of dollars.

The allegations were denied by the government, which banned Global Witness from the country, but the group along with many other investigators have continued to detail intimate links among the political elite, military, police and powerful business syndicates.

The danger is obvious for those attempting to stop or investigate environmental pillage and the closely related issue of widespread land-grabbing, which often results in ecological devastation.

''Environmental defenders in Cambodia are pitted against very powerful forces,'' said Global Witness campaigner Emma Burnett. ''Meanwhile people are rarely held to account for these crimes or the damage they do -- impunity reigns.'' 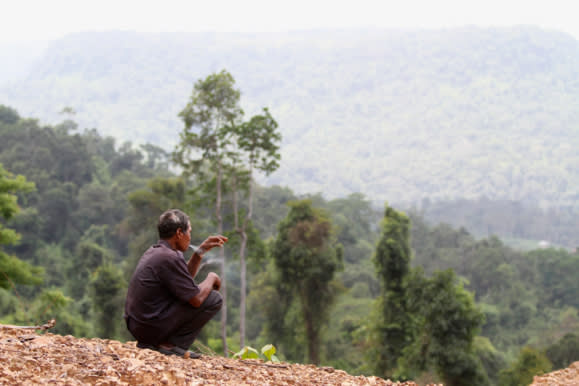 The Cardamom Mountains in Koh Kong province, in southwestern Cambodia, where hundreds gathered in May 2012 to investigate alleged illegal logging and commemorate the death of slain prominent environment activist Chut Wutty.   © Reuters

The most recent casualties were a ranger, a military police officer and a member of a forestry team of the U.S.-based Wildlife Conservation Society. They were killed in January after reportedly discovering an illegal logging camp and confiscating chainsaws near the Cambodia-Vietnam frontier, an area rife with border smuggling. The specific circumstances remain unclear, and if the past is any guide, the truth may never surface.

In one of the most publicized cases, environmental investigator and outspoken critic Chut Wutty was shot dead by a military police officer in 2012 while showing journalists around an illegal logging operation in the province of Koh Kong. The investigation proved deeply flawed with no apparent attempt to uncover who might have ordered the killing. The officer got off with a light sentence and a British documentary, ''I Am Chut Wutty,'' was banned in Cambodia.

''Sad thing is, as long as the Hun Sen dictatorship remains in charge, we will never know what the truth is about that incident,'' said Alejandro Gonzalez-Davidson, a Spanish activist deported from Cambodia in 2015 and barred from returning.

He heads Mother Nature Cambodia, an NGO that has campaigned against dams, illegal sand dredging and logging around the southern island of Koh Kong. Since 2015, six of the group's members have been variously jailed, handed suspended sentences and fined. The province is the virtual fiefdom of Ly Yong Phat, dubbed the ''King of Koh Kong,'' who holds vast properties and concessions and enjoys close ties with Hun Sen.

In a political campaign that climaxed last year, Hun Sen dissolved the main opposition Cambodia National Rescue Party, jailed its leader and suggested that those opposed to him ''prepare their coffins.'' Brad Adams, Asia director of the U.S.-based Human Rights Watch, wrote that the ''last vestiges of democratic government in Cambodia disappeared in 2017. Hun Sen cemented his 33-year rule into dictatorship at the expense of the Cambodian people's basic rights.'' Some political analysts believe that despite the repression, or perhaps because of it, popular opposition to the regime is gathering strength and that while Hun Sen will almost certainly triumph in this summer's polls he may not fulfill his vow of retaining power for at least another decade.

''Environmental activists, an increasing number of them, continue to become engaged in the protection of the nation's natural resources,'' Gonzalez-Davidson said. ''However, due to Hun Sen's relentless campaign of repression, publicly criticizing the government is on hold, as many groups and individuals feel this is now not the most effective strategy.''

Many, but not all.

Community volunteers continue to confront armed illegal loggers as they seek to protect Prey Lang, one of Southeast Asia's last lowland evergreen forests. And Leng Ouch, for another, has not been silenced. Recipient in 2016 of the prestigious Goldman Environmental Prize, he said: ''We have to risk our lives even if we only have a pen, camera and a mouth during our investigations.''