KABUL -- The jubilation that swept through Afghanistan after the first round of the presidential election has quickly been replaced by simmering tension, as the country's first democratic transfer of power since 2001 struggles to gain legitimacy.

A runoff was held June 14 as no candidate won 50% of the first-round vote in April. Counting continues, but early results suggest former foreign minister Abdullah Abdullah, who led the race by 13 percentage points in the first round, has been overtaken by opponent Ashraf Ghani. 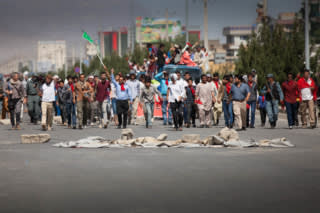 In the weeks since the runoff, Abdullah has accused his opponent of fraud and boycotted the post-election process. Zia-ul-Haq Amarkhail, the head of Afghanistan's Independent Election Commission, has resigned.

Nowhere is this perilous political impasse clearer than in Afghanistan's social media discussions.

The Internet has become a popular place for Afghans to vent their frustration. Over 6 million Afghans have access to the Internet today, out of an estimated population of around 26 million.

The brief euphoria enjoyed by the war-torn nation after millions defied Taliban threats of violence and proudly cast their ballots in April has turned into an ugly online squabble.

Supporters of the two candidates have adopted partisan and divisive language to discredit and attack the other side; some are also using social media to organize demonstrations around the country.

Atta Mohammad Noor, the powerful governor of the northern Balkh Province and a prominent supporter of Abdullah, posted a Facebook message June 18 suggesting a "second generation of jihad" was coming if allegations of fraud are not addressed. The post has since been removed.

Ethnic Pashtuns are going online to rally around Ghani, who comes from a prominent Pashtun family. Others are responding to posts believed to support Ghani with divisive comments.

While the ethnic rallying and personal attacks are nothing new, they have increased significantly in number in the runoff and aftermath of the fraud allegations.

The more extreme of these seem to echo the ethnic divisions that marked Afghanistan's civil war.

In a country only a generation removed from the civil war that pitted many of today's political leaders and their militias against one another, such a pattern of discourse is not to be taken lightly. Indeed, on June 22, the United Nations Assistance Mission in Afghanistan released a statement urging for the responsible use of social media platforms and called for all parties to "refrain from inflammatory statements, hate speech, or statements which promote divisive ethnic mobilization." Meanwhile, a group of senators are demanding a nationwide Facebook ban to prevent any incitement to violence; the government has not taken this step.

There are fears that protests organized online could spiral out of control. Just four days after the second round of voting, a group calling itself the Anti-Fraud Movement used Facebook and Twitter to gather hundreds of protestors on the streets of Kabul.

Some demonstrators carried signs saying, "We will defend our vote to the last drop of blood!" And, "Death to Amarkhail!" Demonstrations have grown and spread to other cities, with photos emerging on social media of voters in Herat, western Afghanistan, burning their voter registration cards in protest.

So far, the demonstrations have remained peaceful; organizers have promised larger protests.

The anti-fraud movement gained momentum after Abdullah's campaign team on June 22 released recordings of alleged phone calls between Amarkhail, members of Ghani's campaign team and provincial electoral officials that suggest the parties were collaborating. A voice allegedly belonging to Amarkhail directed others to "stuff sheep," code for filling ballot boxes with illegal votes.

The recordings spread like wildfire on the Internet. Multimedia versions showed pictures of the men allegedly talking in the recordings. Because the recordings were released simultaneously by numerous accounts directly onto Facebook, an accurate count of views and reach is hard to come by. Anecdotally, there are few Afghans who have not seen or at least heard of it.

The recordings certainly boosted Abdullah's claims of electoral fraud. When Amarkhail resigned June 23, he said he was only doing so for the sake of the national interest. But for many ordinary Afghans, the social media permutations of the recordings are also a great source of dark humor. Numerous videos about sheep-stuffing are circulating on Facebook, including one where a flock of sheep "bah" in unison, supposedly in protest of Amarkhail and Ghani's campaign team using their names to commit voter fraud.

The official preliminary results from the runoff are expected to be announced anytime now, and the figures are bound to stir up more anger.

In a press conference June 25, Ghani reaffirmed his commitment to the rule of law and to a clean vote, while also urging social media users to remain respectful. One of his few references to sheep-stuffing came in a statement that Afghanistan was a nation of lions, rather than sheep, a symbol long used by President Karzai as well.

According to Abdullah, Amarkhail's resignation has left the door open to resume talks with the election commission. However, the path forward is unclear, and Abdullah claims to have further evidence of fraud.

Whatever happens, one thing is certain: Turning to social media may be the best way of staying abreast of the unfolding saga.

Eileen Guo is the founder of Impassion Afghanistan, the country's first digital media agency, and of Paiwandgah, an online citizen journalism platform.