Amid clampdown, Chinese paper takes on Xi in rare satire In the Southern Metropolis Daily's Feb. 20 edition, parts of two unrelated headlines (shown with a red border) on the front page have been widely taken as meaning "the death of the Chinese media's soul."
KATSUJI NAKAZAWA, Nikkei senior staff writerMarch 4, 2016 19:00 JST | China
CopyCopied

TOKYO -- A recent front page of China's Nanfang Dushi Bao, or Southern Metropolis Daily, has made a big splash because it is widely seen as a rare -- and intrepid -- satirical work targeting President Xi Jinping's draconian media controls.

For its Feb. 20 top story, the tabloid newspaper in Guangdong Province reported Xi's instructions issued the previous day to China's three major state-run media outlets, including the People's Daily, the mouthpiece of the Communist Party.

Xi made a rare and high-profile inspection tour of the People's Daily, Xinhua News Agency and China Central Television on Feb. 19 and demanded they pledge allegiance to the party.

"The media run by the party and the government are the propaganda fronts and must have the party as their family name," the paper's headline said.

China's main media outlets are often said to be "the throat and tongue" of the Communist Party. They see their mission as leading public opinion in accordance with the party's wishes rather than reporting the truth.

At first glance, the headline of the Southern Metropolis Daily article looks no different from other Chinese newspapers, because it just parrots his remarks.

But many readers found a hidden message in a photograph just below the paper's headline. The photo shows people scattering at sea the ashes of a recently deceased senior Communist Party official. He was well-known as the father of economic reforms in Shenzhen.

It was accompanied by a short headline: "The soul returns to the sea." The combination of the photo's caption and part of the article's headline was construed as meaning "the death of the Chinese media's soul." On the back of this interpretation, the paper's Feb. 20 edition immediately went viral.

Party apparatchiks got wind of the hidden message too late: It was difficult to recall copies that had already been delivered.

The Chinese authorities later sacked the editor responsible for the day's operations, saying she had mocked Xi's call for unconditional loyalty to the party.

This is not the first time that the newspaper has openly defied the party.

The Southern Metropolis Daily is published by Southern Media Group, a giant media group affiliated with the Guangdong provincial committee of the Communist Party.

In 2010, jailed Chinese pro-democracy activist Liu Xiaobo won the Nobel Peace Prize. The Chinese government was so angry it did not allow Liu to leave the country to attend the award ceremony in Norway.

At the awards ceremony, Liu's chair was left empty, and the image was broadcast around the world. For its front page, the Southern Metropolis Daily ran a satirical photo showing three empty chairs, which were unrelated to the prize, and five cranes. In Chinese, "he" (crane) and the word for "congratulations" are homonyms.

China's Southern Weekend is also published by Southern Media Group. The weekly once got embroiled in a dispute with Communist Party censors, but it was not so lucky.

In its 2013 New Year edition, the paper initially tried to publish an article about the importance of government based on constitution. But the weekly's editorial executives, well aware that the piece was bound to anger Xi if published, rewrote the article. Some angry journalists, as well as activists, held demonstrations in protest.

The incident occurred shortly after Xi came to power as the Communist Party's general secretary in the autumn of 2012, and in spring of 2013 he became president.

Xi made the Feb. 19 inspection tour of China's three major state-run media outlets to bring them to heel.

CCTV pledged loyalty to the Communist Party and Xi as its leader. In a message displayed on a large monitor during Xi's speech in front of its employees, the broadcaster said, "CCTV's family name is the (Communist) Party. We are absolutely loyal. Please inspect us." CCTV's remarks sparked an uproar on the Internet. "Media outlets should be friends of ordinary people, and their mission should be to report the truth," one post said. But these comments were eventually deleted from the Internet by the authorities.

Sina and other online media outlets in China have also put up thinly-veiled resistance to Xi's attempt to tighten his grip on the media. As one example, they have reported remarks made by former Premier Zhu Rongji.

Zhu was a fan of CCTV's investigative news program dealing with social issues. When he inspected the national broadcaster in 1998, he gave a pep talk to its staff. Zhu stressed the importance of "supervision by public opinion" and urged CCTV to become "the throat and tongue of the people." His remarks contrast sharply with Xi's Feb. 19 remarks.

Since being inaugurated, Xi has been using a sweeping anti-corruption campaign as a tool to consolidate power. Among those targeted are executives at media outlets, including CCTV.

Initially, the Chinese leader was extremely popular thanks to his image as "a champion of justice" in his crackdown on corrupt officials. However, many ordinary people are starting to yawn at the campaign.

In addition, the domestic economy is sharply slowing down, partly due to the effects of Xi's frugality campaign. This policy could affect the lives of common people, prompting them to turn their backs on the leader.

In China, there is no survey that shows the president's approval rating. But if such an opinion poll was conducted now, "It is clear that President Xi would not enjoy as high of a support rate as he did one or two years ago," said one Chinese media source.

That is why Xi is trying to maintain his popularity by mobilizing state-run media through the Communist Party's publicity department, which is in charge of media control.

Xi was accompanied on his media inspection tour by Liu Yunshan, a member of the Politburo Standing Committee, the party's top decision-making body. Liu is in charge of publicity. 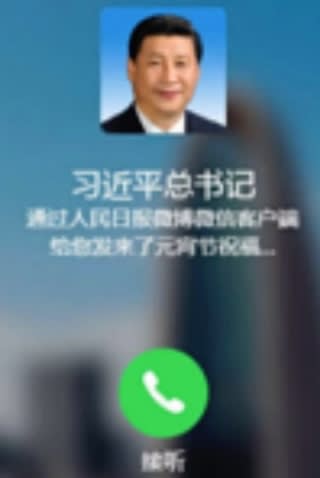 In a publicity stunt, Xi recorded an audio message at the People's Daily, where he extended Lantern Festival greetings to the country's netizens through the newspaper's social media platforms. The Lantern Festival is celebrated on the 15th day of the first month of the lunar calendar, traditionally marking the end of the Chinese New Year holiday.

For Xi, public support is crucial as he lacks a strong support base within the Communist Party. He wants to maintain strong public support ahead of the party's quinquennial national congress in 2017, where leadership changes will be made.

At the party's next national congress, five of the seven members of the Politburo Standing Committee, which is led by Xi, will be retiring because of age restrictions. Xi and Premier Li Keqiang will remain as committee members.

2016 is a crucial year for Xi politically as he will have to start preparing for an anticipated behind-the-scenes power struggle with political foes over the new lineup of the powerful committee.

Xi's political style is reminiscent of Mao Zedong, the revolutionary leader who led China to communism. Mao launched the 1966-1976 Cultural Revolution as part of his power struggle with political foes.

In addition to pushing ahead with his own political campaign aimed at driving out foes, Xi has also been trying to control and exploit the media, as Mao did decades ago.

Xi seems to be even aiming to become another -- only smaller -- Mao.