Producers assert government-set prices leave them out of pocket

NEW DELHI -- Ahead of general elections due by May, India's debt-laden farmers, a key electorate, want Prime Minister Narendra Modi to act before it is too late.

"We are not beggars. We want Modi to solve our woes as promised by him before he came to power [in May 2014]," said Jeetender Singh, a 25-year-old sugar cane farmer from Sitapur in India's northern Uttar Pradesh state.

He was one of tens of thousands of farmers from across the country who descended on the national capital on Nov. 30 to demand a one-time loan waiver and higher prices for their crops. Farmers also demanded that parliament convenes a special session to discuss their plight in the fourth such protest in a year.

Singh said he supplied his produce to sugar mills at 325 rupees ($4.58) per quintal (100 kilogram) last year, but has only received 70% payment. He is still owed 150,000 rupees by the mills despite government promises to help settle payments within 14 days of crop delivery, Singh said.

The Indian government enforces a minimum support price for around two dozen agricultural products -- including grains like wheat and rice, pulses and sugar cane -- before they are sowed. The floor prices have been set to protect farmers from sharp price falls in the event of bumper crops, but in reality, the products have failed to trade much above those levels, leading to farmer demands for higher rates. 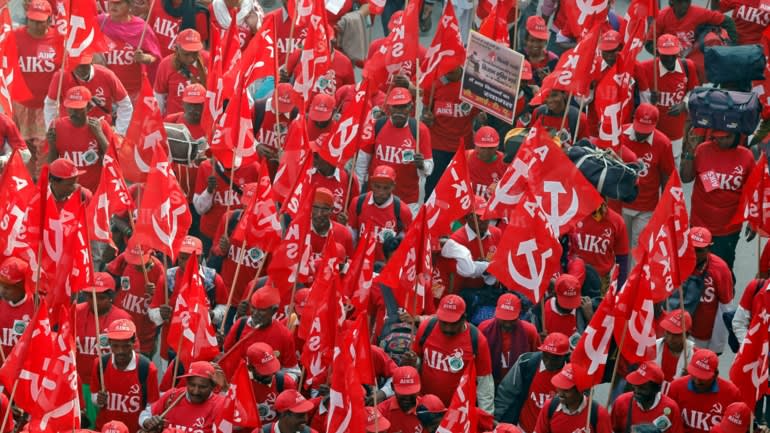 Also, farmers' lack of storage and logistical infrastructure mean that they often have to sell at discounted rates to middlemen.

"Sugar mills get financial assistance from the government which can put pressure on them to clear our dues, but it is not happening," Singh complained. He added that he was forced to take a loan of 155,000 rupees from the State Bank of India just to get by.

About half of India's workforce is engaged in agriculture, but the sector contributes only 15% to gross domestic product. Farmers are heavily dependent on the erratic monsoon season, keeping productivity and profits low.

"We want the government to fix MSP taking into account comprehensive cost of production which Modi too promised before coming to power, but [the government] hasn't done so," said Gagan Kurien, 35, a rice farmer from southern Karnataka state. He said he had taken a loan of 2 million rupees from Gramin Bank that he was not able to repay.

The Indian government earlier in the year announced it would raise minimum support prices. But how that rate is derived at remains hotly debated. Farmers complain that the rates fixed by the government do not cover production costs comprehensively and do not always take into account actual paid-out costs, the value of family labor, rent and interest on land, assets and capital they own. PRS Legislative Research, an independent research institute that focuses on lawmaking processes, pointed to the rice market as an example. The government raised the minimum support price for rice to 1,750 per quintal this year, from 1,550 rupees per quintal previously. PRS calculated that farmers would make a profit of 50.1% if only production costs, actual paid-out costs and imputed value of family labor were taken into account. But if other costs are included, farmers' profit would only be 12.2%.

"How can we vote for this government again?" Kurien said. "If Modi implements [MSP based on comprehensive production cost] only then we will vote for him. The government needs to shift focus from corporates to farmers."

Jagsir Singh, 45, a wheat farmer from northern Punjab state said that the rise in fuel prices has also meant that the delivery of goods to markets is substantially more expensive.

"While the fuel and fertilizer costs have been rising sharply, prices for our crops have not risen accordingly. It's been over 70 years [since independence from the U.K.] and no government has worked for the welfare of farmers," he said, adding he was not sure whether he would even vote in the general elections. Farmers and labourers listen to a speaker during a protest against what they say is anti-people policies of Prime Minister Narendra Modi's government, in New Delhi on Sept. 5.    © Reuters

Another farmer Shail Bihari Mishra, 70, from Uttar Pradesh, said: "Now farming has become a loss-making venture. A farmer has to spend on seeds, fertilizers, irrigation and fuel. Where will he get the money from?" He grows sugar cane, wheat and rice.

He said that farmers are burdened by loans that they can't afford and some have been driven to suicide. "If the government doesn't do anything for farmers this time, it will be shown the door in 2019 [polls]," Mishra added.

Duru Arun Kumar, an associate professor of sociology at the New Delhi-based Netaji Subhas Institute of Technology, said that farmers' fears can be assuaged by short-term incentives and promises made in the run-up to polls, so their impact on the election remains to be seen.

"They may either vote for Modi or not vote at all," Kumar said.