President Widodo vows to eradicate country of terrorism 'from the roots' JAKARTA -- The police headquarters in Indonesia's second largest city of Surabaya was hit by a suicide bomb attack on early Monday morning, a day after three churches in the city were bombed.

CCTV footage obtained by Nikkei shows a sudden explosion as police stopped a car and a bike coming into the station. President Joko Widodo, speaking to the press, confirmed it was a suicide attack.

National police said the attack was carried out by a family, and that four of the members died in the explosion. A fifth member of the family, a young child, survived and is receiving treatment. A total of 10 people including the perpetrators were affected by the attack. Several police officers were injured.

"This action is a cowardly act, a disrespectful act, a barbaric act," said the president. "And I need to emphasize again, we will fight against terrorism, and we will get rid of terrorism from the roots."

The attack comes a day after suicide bombings on three churches in the same city. Those attacks killed at least 13 people including the attackers and left 43 others injured. Members of a single family -- a father, mother and four children -- who had traveled to Syria and were affiliated with Jemaah Ansharut Daulah, or JAD, an Islamic State-inspired group in Indonesia, carried out the attacks. 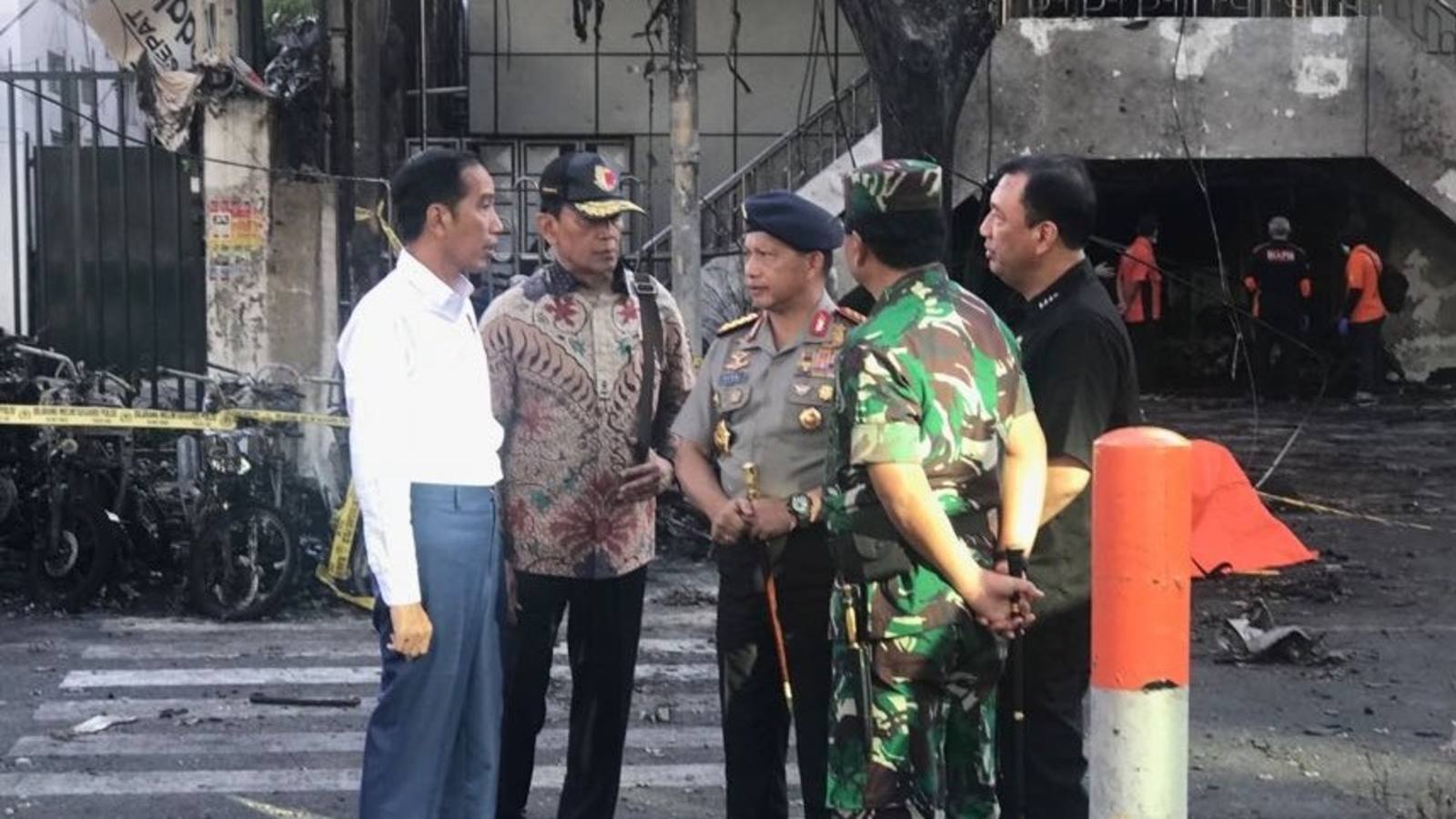 The police have a list of 500 people who are considered security threats, having traveled to Syria and come back to the archipelago. Indonesia's government and parliament have been working to revise the country's anti-terrorism law to allow police to arrest these people, but efforts have been dragging on due to humanitarian concerns.

President Widodo now says parliament has to pass the revision by June. He added that if it is not passed, the government will issue a regulation in lieu of a law to put it into effect in a de facto manner.

On Sunday night, there was also an explosion at a housing complex in Sidoarjo, on the outskirts of Surabaya, in what is suspected to be a hideout for terrorists. Police have pinned the blame for all three explosions throughout Sunday and Monday on JAD.

Security levels in Jakarta, Surabaya and Semarang have been raised to maximum.

The spate of attacks occurred just ahead of the holy month of Ramadan. "Jihadis consider attacks during or just before Ramadan as 'holier' than at other times of the year," said Sidney Jones, a terrorism expert with the Institute for Policy and Analysis of Conflict.

"It's too early to say exactly what the specific aim of these bombings was, but it may have been to prove that ISIS was alive and well in Indonesia, even after defeats in Syria and Iraq -- and the death of Indonesian ISIS leader Bahrumsyah in a Syrian airstrike on April 17," Jones added.

The attacks seem to be influenced by the riots at a high-security detention center outside of Jakarta, which led to five guards and one detainee being killed. A member of the group that caused the riot took to social media during the incident, saying, "The time to act is now." During negotiations with police, inmates demanded to meet Aman Abdurrahman, a radical cleric and the JAD's ideological leader.

The cleric "has been imprisoned since 2010 and is currently on trial again for having helped inspire the January 2016 attacks in Jakarta," Jones noted. "Since those attacks, however, he has been in isolation and unable to communicate easily with his followers. Since March 2017, we thought JAD has been operating more as autonomous cells without central leadership, but now it's unclear. These attacks appear to have been well-coordinated, suggesting a more organized leadership."

Jones added that Indonesia has seen child combatants before, "but never as part of entire families." The expert said the nature of the attacks is "a first, not just in Indonesia but possibly in the world."