The southern island hosts the bulk of U.S. bases in Japan 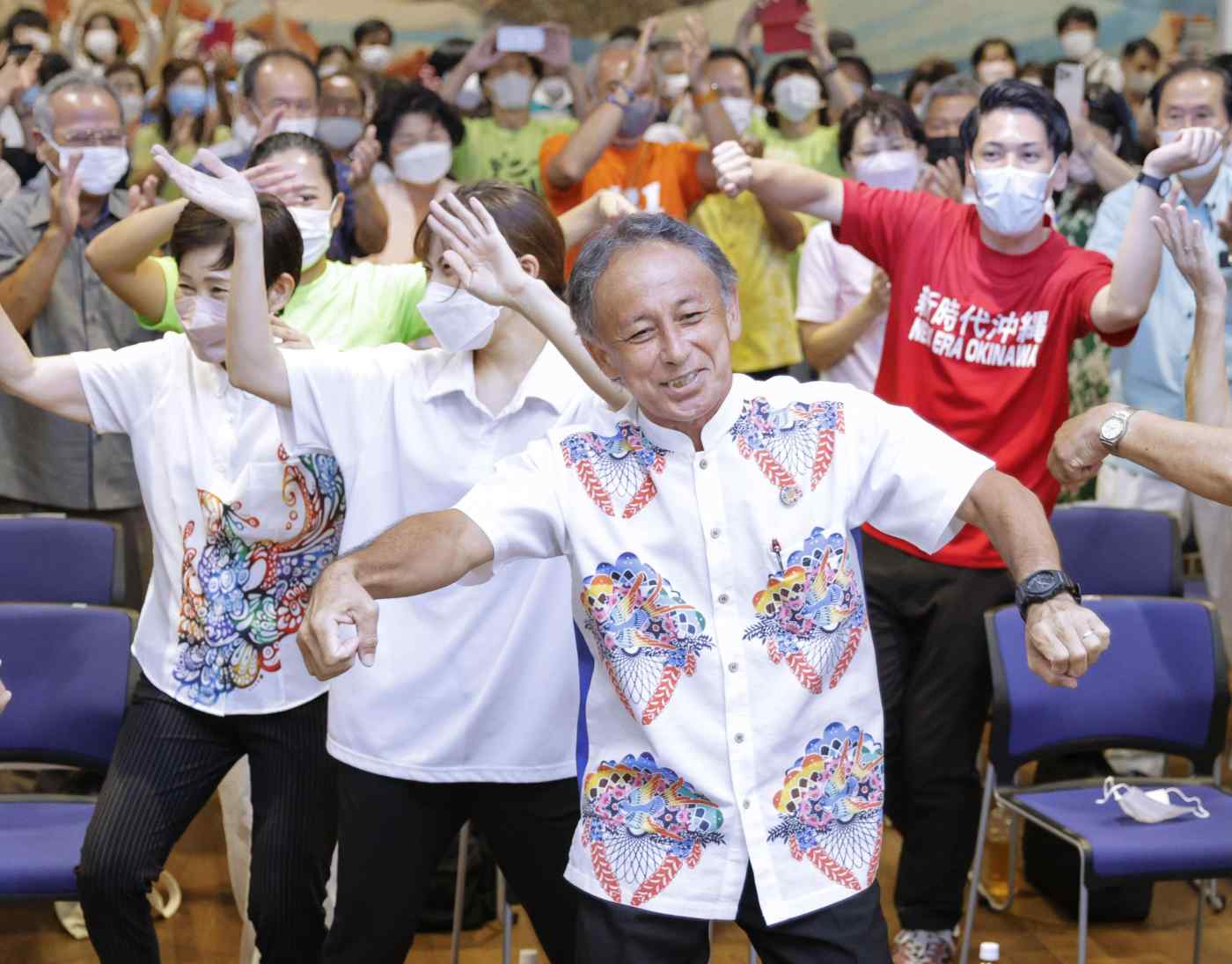 TOKYO (Kyodo) -- Okinawa Gov. Denny Tamaki won a second four-year-term following Sunday's gubernatorial election, obtaining a renewed mandate for his efforts to discontinue a plan to relocate a U.S. base within the island prefecture.

Opposition-backed Tamaki defeated former Ginowan Mayor Atsushi Sakima, 58, who was supported by the ruling coalition of the Liberal Democratic Party and Komeito. Sakima ran on a platform of pressing ahead with moving U.S. Marine Corps Air Station Futenma from the densely populated city of Ginowan to the Henoko coastal area of Nago.

Reviving the all-important tourism industry was also a focus of the election with the Okinawan economy having taken a heavy battering from travel restrictions put in place during the coronavirus pandemic.

"People in Okinawa have not wavered in their wishes (of halting the plan) even a bit," Tamaki told reporters, adding that he will call on the central government to suspend the relocation. The 62-year-old anti-base incumbent was backed by the main opposition Constitutional Democratic Party of Japan and smaller opposition parties.

Okinawa still hosts the bulk of U.S. bases in the country, over 50 years after it was returned to Japan in 1972 from postwar U.S. administration. The Japanese government places strategic importance on Okinawa due to its proximity to potential geopolitical flashpoints such as Taiwan, which has come under increasing pressure from a more aggressive China.

The latest verdict on the plan comes after the prefecture rejected the transfer in gubernatorial elections in 2014 and 2018 as well as a referendum in 2019.

Among the island's 1.16 million voters, there was a turnout of 57.92 percent, down 5.32 percentage points from the previous gubernatorial election, according to the local election board.

The victory by the governor deals a blow to efforts by the government of Prime Minister Fumio Kishida to press ahead with the decades-old relocation plan and comes after the ruling LDP was entangled by party members' links with the controversial Unification Church.

Sakima himself has admitted to attending a gathering of an organization affiliated with the church, formally known as the Family Federation for World Peace and Unification, which has been criticized for being engaged in antisocial activities.

The religious group has become the source of controversy since former Prime Minister Shinzo Abe was shot on July 8 during an election campaign speech. Abe's assailant said he harbored a grudge against the group and believed that the former prime minister had ties with it.

While the election was a three-way race also involving former lower house member and former LDP lawmaker Mikio Shimoji, 61, it effectively became a rerun of the 2018 election in which Tamaki defeated Sakima.

"I have said to the Okinawan people that there is no choice but to accept relocation but that did not gain support," Sakima told reporters.

Tamaki has demanded that the base be moved outside of the prefecture or the country entirely, and his victory means the legal battle over the transfer plan between the central and Okinawa governments will only intensify.

The Kishida government and the U.S. administration maintain the current plan, first agreed upon between the two countries in 1996, is the only solution that ensures both deterrence under the long-standing bilateral security alliance and removal of the dangers posed by the base.

LDP election chief Hiroshi Moriyama told reporters the plan to relocate the base to Henoko is set in stone, adding, "We will strive to gain the understanding of the Okinawa people."

In the Ginowan mayoral election held the same day, ruling-coalition backed incumbent Masanori Matsugawa, 68, who supports the base relocation to Henoko, defeated opposition-backed Harumasa Nakanishi, 61, head of the federation of prefectural high schools' parent-teacher associations, who opposes the relocation plan.

Moriyama said he is "not sure" whether the Unification Church controversy had any impact on the election.

The LDP revealed on Thursday around half of its lawmakers had connections with the church.

The group, founded in South Korea in 1954 by the late Sun Myung Moon and labeled a cult by critics, is known for its mass weddings and "spiritual sales," in which people are talked into buying jars and other items for exorbitant prices.