Newspaper faces advertising squeeze even as it struggles with falling readership 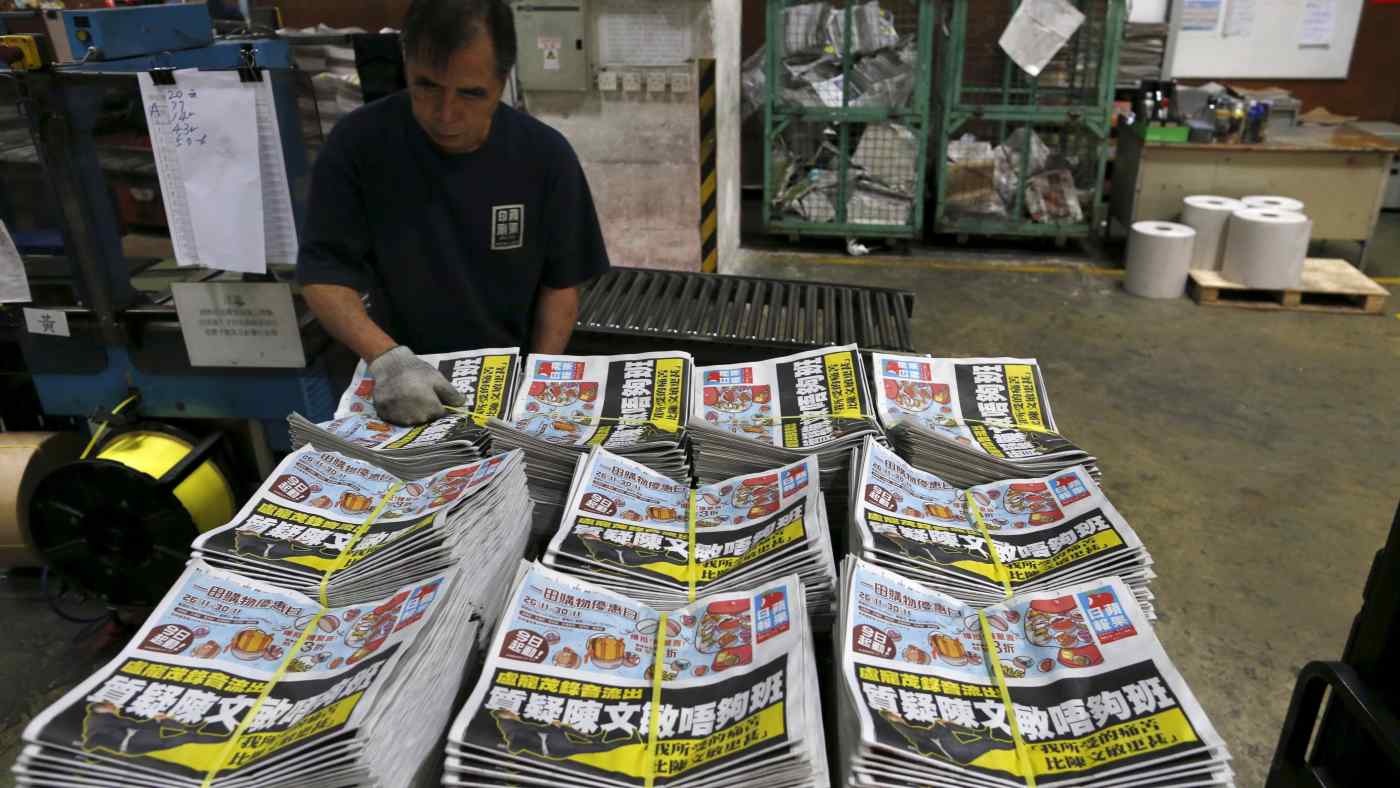 HONG KONG -- Former Hong Kong Chief Executive Leung Chun-ying has made a daily habit of carefully scanning a Hong Kong newspaper he detests. If he spots a full-page advertisement in the Apple Daily, Leung uploads an image of the ad, clearly showing the name of the advertiser, to his Facebook page.

Apple Daily is known for its strongly anti-Beijing editorial stance and its founder, Jimmy Lai Chee-ying, is an ardent supporter of Hong Kong's pro-democracy movement. So it is hardly surprising that Apple Daily has been a thorn in Leung's side ever since the pro-China politician took Hong Kong's top job in 2012. He was succeeded by Carrie Lam in 2017.

There is little doubt that Leung's daily routine is aimed at putting pressure on businesses not to buy ads in the newspaper.

Leung, who also serves as a vice-chairman of the Chinese People's Political Consultative Council, which advises the government on policy issues, appears to have taken it upon himself to act as Beijing's media watchdog in Hong Kong.

Bruce Lui, a senior lecturer in journalism at Hong Kong Baptist University, said Leung's Facebook posts amount to "public activity," rather than a personal pastime. He is putting political and economic pressure on the media, said Lui, a former TV news reporter.

The feud between Leung and Apple Daily took an amusing, personal turn on April 8, when a full front-page ad lampooning Leung's loyalty to the Chinese government appeared in the newspaper.

The ad, featuring a doctored photo of Leung sporting a hat adorned with a Chinese star, urged him to become China's next president. The ad's title read: "Support Leung Chung-ying for president. Go north as soon as possible. Replace President Xi [Jinping]."

It was paid for through a crowd funding campaign that raised the necessary money from Hong Kong citizens angred by Leung's Facebook posts, which urge his supporters to boycott companies that take out ads in the paper. The day the satirical ad ran, copies of Apple Daily were sold out at most newsstands.

The swipe at Leung shows that free speech is still alive in Hong Kong, but the survival of Apple Daily is not assured. A growing number of big Hong Kong companies are avoiding advertising with the newspaper for fear of antagonizing Leung, who has close ties to the Communist Party.

The battle with Leung only adds to the daily's woes brought on by a shrinking readership. Its circulation has plunged by two-thirds in the past decade to about 110,000 as more readers, especially younger ones, opt for online media. Apple Daily's ad revenue has fallen by more than half in the past three years.

Next Digital, the Hong Kong-based company that publishes the newspaper, has posted a net loss for three straight years through March 2018.

To regain its financial footing, Apple Daily adopted a paid subscription system for its online version in April, ending free and complete public access to its content. It plans to start charging for subscriptions soon.

Apple Daily's competitive edge lies in its prominent coverage of entertainment news and corporate scandals, according to Lui of Hong Kong Baptist University. Many readers support its critical stance toward the Chinese government, but it is not clear whether they are willing to pay for it, he said.

Many Hong Kong newspapers have succumbed to political pressure from Beijing and adopted a pro-China editorial policy. It is becoming harder for them to deal with political topics, according to one veteran reporter.