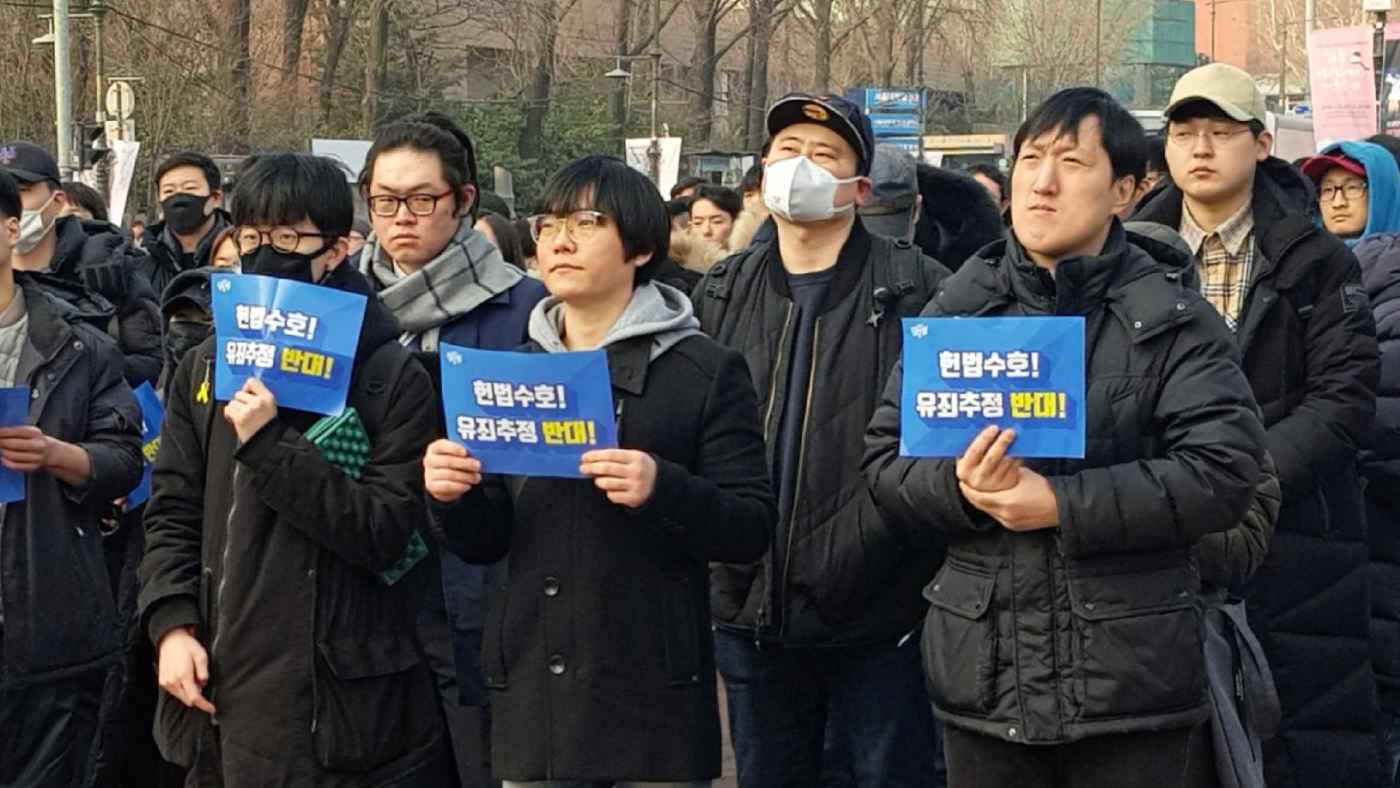 SEOUL -- The South Korean government's campaign to crack down on sexual harassment in the #Me Too era has sparked a backlash among young men aggrieved by what they see as "reverse discrimination" under President Moon Jae-in.

At a rally in a student-heavy area of Seoul last month, one protester complained about an incident last year at Sogang University, a prominent private school.

One male student commented to a female classmate that "all the girls in our section are pretty," sparking a controversy. Outraged students set up a committee, calling the statement "verbal sexual abuse" and recommending that the student's activities on campus be restricted.

The committee revised its recommendation after criticism that its initial judgment was too harsh. But the affair symbolizes a growing trend of social consequences for men who engage in conduct that women find unwelcome, a stark change in South Korea's traditionally male-dominated society.

The #MeToo movement has brought a number of allegations of sexual harassment and violence. Speed skater Shim Suk-hee, a gold medalist at last February's Winter Olympics in Pyeongchang, rocked the country when she accused her male former coach of rape.

The National Assembly passed legislation in December to protect women from violence, defining the term to include acts such as sexual harassment and stalking that have been difficult to punish due to the lack of a legal basis for prosecution.

Many young men see such measures as "reverse discrimination." South Korea's #MeToo cases have involved older men being accused of abusing their authority in areas with strict hierarchies such as art, culture and sports. But male millennials, raised amid a shift toward considering women equal to men, complain that their female counterparts are getting special protections.

This discontent is reflected in Moon's approval rating. Gallup Korea put support for the president among voters aged 19-29 at nearly 90% in May 2017, just after his inauguration, but the figure has plunged since last summer. His approval rating was underwater in December, with disapproval of 45% exceeding approval of 41%.

But his support among women in this age bracket is markedly higher than the average, with 63% approving of his performance and 23% disapproving.

South Korean pollster Realmeter confirmed a similar trend in a survey in December, noting that men in their 20s, once a core part of Moon's support base, now form a core part of the opposition to his government.

The Seoul rally was organized by a group that fears that more men are being found guilty of crimes based solely on the testimony of female accusers. The group has been lobbying courts to "protect the presumption of innocence." While the organization says it is not antifeminist, 75% of its members are men.

"The Moon administration's policies are focused on women, and men feel deprived," a speaker from the group said at the start of the event.

Young men have also been up in arms over a November ruling by South Korea's Supreme Court that objecting to mandatory military service on religious or conscientious grounds is "justifiable." All able-bodied men in South Korea must serve for nearly two years, and some of those obligated to serve see it as unfair that women and religious minorities are exempt from this requirement.

Asked at his New Year's press conference in January about his dwindling popularity among young male voters, Moon chalked it up to the government "not giving hope" to young people and said he would make more of an effort to do so.

The president's approval rating has remained mired below 50%. But the conservative opposition that led the country under Moon's ousted predecessor, Park Geun-hye, remains unpopular with young voters and is unlikely to attract much support as an alternative during the next general election in April 2020.

Even so, if Moon's government fails to address the anger of South Korean youth, it could undermine support among his progressive base.