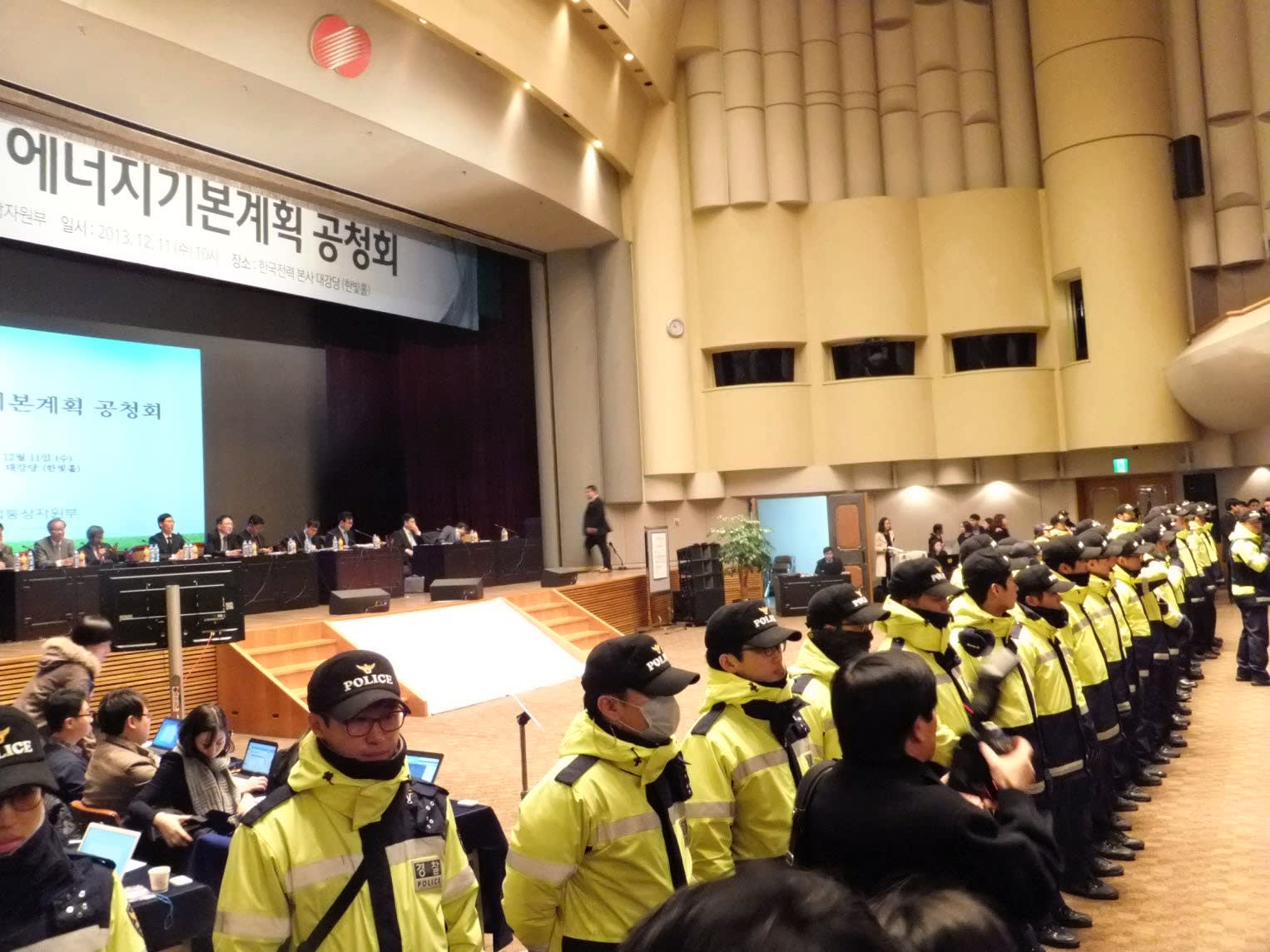 Police had to be brought in during public hearings on energy plans in Seoul in December last year to prevent anti-nuclear protesters from disrupting the proceedings.
KENTARO OGURA, Nikkei staff writerJanuary 22, 2014 19:00 JST | South Korea
CopyCopied

SEOUL -- The South Korean government has chosen the path of increased nuclear dependence for the sake of the economy despite growing public concerns over safety and the mounting problem of how to deal with nuclear waste.

In 2008, the government adopted a policy to boost nuclear energy's contribution to the power supply to 41% by 2030. But that figure has been slashed to 29% in 2035 in an energy blueprint released Jan. 14 by the Ministry of Trade, Industry and Energy.

Six years ago, the government could easily justify a sharp increase in nuclear dependency by casting nuclear power it as a low-cost energy source with a small carbon footprint. But the disaster at Tokyo Electric Power's Fukushima Daiichi plant in 2011 turned nuclear power into a hard sell.

One of President Park Geun-hye's policy platforms during the election in late 2012 was to redesign from scratch the blueprint for the country's energy mix for the next two decades. She promised to re-evaluate plans to build new reactors if viable alternative energy sources can be secured.

In the lead-up to the development of the new energy road map through 2035, a public-private working group recommended keeping the proportion of nuclear power at 22-29% of total electricity generation. The recommendation "sends the message that it would be difficult for a policy that calls for further increases in nuclear power generation to garner public support," a university professor who headed the working group told a local newspaper.

Public opposition to nuclear power was in abundant display during public hearings on the subject last month. Opponents of nuclear power repeatedly disrupted the meetings, with some running up to the stage and others standing up in their seats and hoisting anti-nuclear banners.

Amid the mounting public pressure against bolstering the use of nuclear power, some observers were expecting the Park administration to change the nuclear policy, which was developed by the previous government. But even though the new blueprint gives the appearance of lower nuclear dependency, it does not translate to reduced use of nuclear power.

Under the new road map, South Korea's dependence on nuclear power as a percentage of overall power output will be downsized from the 2008 plan. However, 29% is still higher than the current level of 26%.

Furthermore, the picture looks different if the focus is shifted to actual power output. Because the new plan assumes sharply higher overall power demand than the old one, the output from nuclear power in absolute terms is likely to grow much more steeply than the increase from 26% to 29% suggests.

The nuclear dependency figure is calculated based on power generation capacity, not actual power output. Because nuclear plants operate at higher utilization rates than other types of power stations, nuclear power's share in overall power output based on actual electricity generated comes to 59% under the old plan and in the low-40% range under the new one.

This shows there is actually very little difference between two energy policies when it comes to how much electricity output they are expecting from nuclear plants. In both cases, the aggregate output from nuclear reactors will have to more than double in roughly 20 years because the actual output in 2012 stood at 150.3 billion kilowatt-hours.

South Korea currently has 23 reactors spread among four facilities. The government plans to build at least 16 more reactors, aside from the 11 it has already decided to add. Because the existing plants do not have much room for extra reactors, new sites will have to be developed.

Then there is the issue of how to handle nuclear waste, since more reactors means more spent fuel.

How to dispose of nuclear waste is a major common challenge for all countries with nuclear plants. Finland is building a new processing facility, but this is rare. The U.S. and many other countries have been struggling to add more such processing plants due to local objections.

In South Korea, even the basic question of how to dispose of nuclear waste remains unanswered. The government wants to reprocess it, but that is not allowed under its existing nuclear treaty with the U.S.

Seoul negotiated for this to be changed ahead of the renewal of the treaty this coming March, but Washington did not budge. In the end, the two sides decided to simply extend the treaty by two years.

Meanwhile, nuclear waste in South Korea is piling up in intermediate storage facilities at nuclear plants. Some storage sites are expected to become full by 2016; the government plans to deal with the problem by making them bigger. But new facilities will have to be built sooner or later, because some nuclear plants will likely run out of space to hold waste by 2024.

The government has responded by setting up a public-private committee last October to discuss waste-processing methods and how to select locations if new intermediate storage facilities are to be built. The panel is expected to present recommendations to the government by the end of this year.