BANGKOK -- With her formal swearing-in on Monday by U.S. Vice President Mike Pence, as President Donald Trump looked on, Gina Haspel has made history as the first female director of the Central Intelligence Agency and for now has outrun a controversy over torture in Thailand -- a country outside her seven career postings at points officially undisclosed in Africa, Europe and beyond.

In addition to English, Haspel speaks Russian and Turkish. Like a character in a spy novel, she has left no digital fingerprints from a 33-year clandestine career. She recently recounted to the U.S. Senate intelligence committee some "real life" adventures. "I excelled in finding and acquiring secret information that I obtained in brush passes, dead drops or in meetings in dusty alleys of Third World capitals," she said.

Senator John McCain, a Vietnam War veteran who was tortured as a prisoner of war in Hanoi, unsuccessfully lobbied the Senate to reject Haspel's nomination because of a brief spell in Thailand in late 2002 when she ran a torture facility known as the Cat's Eye, or Detention Site Green (DSG), and her drafting of a memo in 2005 to destroy 92 video tapes of interrogation and torture stored by the CIA in Bangkok. 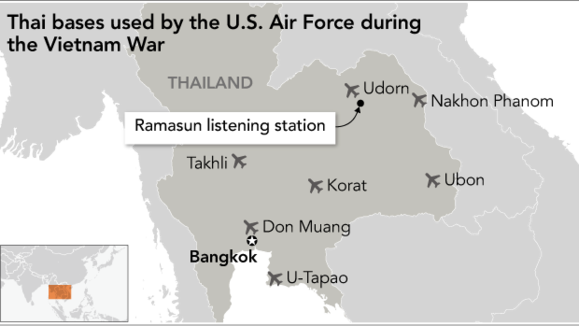 Haspel has since been cleared of wrongdoing by internal investigators. The "enhanced" interrogation techniques were legal at the time, they concluded, and the order to destroy the tapes came from her boss.

Haspel had nevertheless lobbied strongly for destruction of the 100 hours of recordings. Those included 12 hours of graphic torture. Zayn al-Abidin Muhammed Hussein, or Abu Zubaydah, a Saudi Arabian al-Qaida suspect, was flown in from Pakistan. After being hospitalized for a wound, he was moved to DSG, where he was first questioned by the Federal Bureau of Investigation and then subjected to more brutal treatment by CIA interrogators. That included 83 waterboarding sessions, which produced little the FBI had not already extracted from him.

When Haspel subsequently took over as DSG chief of base in October 2002, she oversaw the interrogation of another detainee, Abd al-Rahim al-Nashiri, who was behind the bombing of the USS Cole in Yemen in 2000. The Saudi Arabian was waterboarded three times.

"Nashiri's interrogation in Thailand lasted a little more than two weeks," Tim Golden reported in a lengthy ProPublica article earlier this month. "Then the operation was thrown into turmoil when a New York Times journalist began asking the agency about reports that it was holding Qaida prisoners in Thailand. Haspel was ordered to shut down the secret prison immediately."

Golden's account indicates the operation was not curtailed because of noncompliant or greedy Thais hosts, as some have suggested, or because it failed to produce useful results.

It also does not mean that torture on Thai soil ceased. A facility that requires a white, windowless room, bright halogen lighting, some rudimentary plumbing and a powerful sound system to blast rock music could be located pretty much anywhere -- and not necessarily in a building with a CIA pedigree.

Human rights investigators in Thailand believed they might be able to pinpoint DSG after a Thai intelligence officer let slip that it was located in a converted building used by the U.S. during the Vietnam War. But the "clue" pointed to any number of former U.S. military bases, listening stations and ammunitions dumps in northeastern and central Thailand. It was about as useful as suggesting the presence of a very small needle in a very large haystack.

An unidentified former Thai national security adviser recently told the BBC on condition of anonymity that the building concerned was located in the northeastern city of Udon Thani in a safe house inside the Udorn Royal Thai Air Force Base. During the Vietnam War, the CIA occupied a three-story building at the base staffed with about 40 personnel. Known as the 4802nd Joint Liaison Detachment, it was a key support unit for the agency's massive operations in Laos, a not so "secret" war that depended on Air America, a "private" front company with only one client.

Visitors around 1970 recall a dozen or more Air America delivery aircraft usually sitting on the ramp in front of the CIA building near a flight-control shack. These included bulbous Sikorsky H-34 helicopters and single-engine Pilatus Porter aircraft that could land on scrubby runways carved into the Lao hinterland to supply Hmong and Thai mercenary forces. The main entrance to Udorn Thani Royal Thai Air Force Base as it appears today.

Was this same ramp used to deliver al-Qaida suspects for interrogation by CIA executive jets some three decades later?

"Udorn makes perfect sense," a former U.S. Air Force officer familiar with American military logistics in Thailand told the Nikkei Asian Review. He noted the availability of old American structures and discrete access for aircraft landing at the Royal Thai Air Force's Wing 23, opposite Udon Thani International Airport. A hub for budget airlines, the airport has about one civil aircraft movement every 15 minutes that provide quick connections to Bangkok and other destinations.

A retired Thai-speaking CIA operative active in Thailand since the 1970s, and once a resident in Udon Thani, is highly dismissive of Udorn being involved, but he declines to disclose at least two much more likely sites on the grounds that these might still have operational value to the agency. "What does it matter where it was, anyway?" he told Nikkei.

Another CIA officer active in Thailand at that time is also adamant that no interrogations took place on the Thai base.

They might be correct, however, if detainees were landed at the base but taken elsewhere for interrogation.

Others who might have knowledge have remained tight-lipped and respectful of Haspel. A long-retired CIA station chief in another Southeast Asian country declined to disclose any chat on the agency's retiree grapevine. "I have nothing to offer," he told Nikkei. "I like Gina Haspel and hope she gets confirmed."

Meanwhile, some human rights investigators have taken an interest in Ramasun, a U.S. listening station built in 1965 that a civilian Thai government shuttered in 1976. "It provides secrecy and is not on anyone's radar," one investigator told Nikkei.

Once known as the Elephant's Cage, Ramasun's 50 or so 40-meter-high masts fixed in a circle nearly 300 meters in diameter still stand. The unattended Ramasun Museum sits in a circular building at the center. The masts once supported a Wullenweber "circularly disposed antenna array" that monitored radio transmissions from Pakistan to China.

During the Cold War, eight such AN/FLR-9 signals intelligence stations formed a global network known as the Iron Horse, monitoring virtually the entire planet. A slightly larger installation at Misawa in northern Japan was decommissioned in 2014. 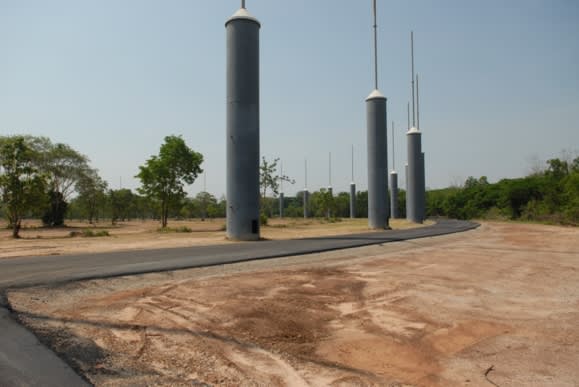 Some 50 massive steel masts that once formed the “Elephant's Cage” -- 300 meters in diameter -- at the Ramasun listening station still stand.

Some of Ramasun's old residential buildings today house a tumbledown drug rehabilitation village. The camp's old administrative area is in much better shape, however. It is home to Camp Phraya Soonthorn Dharma Tada, part of the Internal Security Operations Command. The Thai command dates to 1965, when it was created to execute counter-communism strategies. Answering to the Office of the Prime Minister, it still deals with threats to national security, including Muslim unrest in Thailand's three southernmost provinces.

Ramasun is located just 12km from the main gate of the Udorn base, which has a frontage along Thanon Thahan, or Military Road, a stretch of the U.S.-built Friendship Highway, Thailand's first properly paved provincial highway.

In early 1976, Ramasun caused a major upset for Prime Minister Kukrit Pramoj and his cabinet; the civilian government was unaware of the massive base's existence. In 1965, a secret agreement had been signed "for the government of Thailand" by the deputy defense minister, Air Chief Marshal Dawee Chullasapya, with the U.S. ambassador, Graham Martin.

The agreement was remarkable for having no expiry date, and for placing the entire facility off limits to Thais. The U.S. owned the 190 hectares of land in all but actual title. Ramasun retains an air of unfinished business. The fact that something so large went largely unnoticed might inform today's frustrated torture chamber hunters. 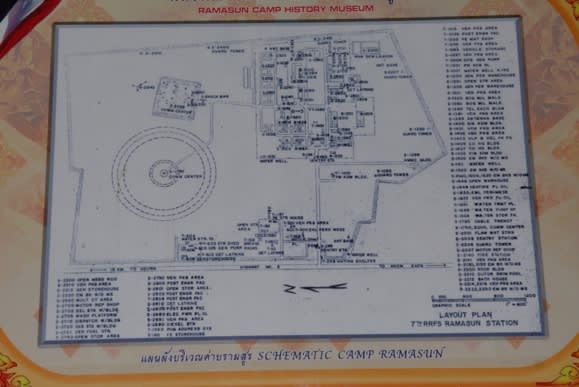 The original ground plan of Ramasun, a top-secret listening station built in northeastern Thailand during the Cold War.

Among the many other possible locations for DSG, the vast U-Tapao naval air base is usually viewed as doubtful because of the number of Thai navy personnel floating around and the planeloads of tourists that pass through, many from China and Russia.

Bangkok's Don Mueang International Airport, which faces the main base for the Royal Thai Air Force, is also thought as unlikely. The airport, known at the time as Don Muang, was the first air base to be phased out by the U.S. in 1970 after its location directly opposite Bangkok's international and domestic civil aviation terminals made Thailand's involvement in the raging Indochina conflicts obvious. That did not sit well with an expanding tourism industry.

Such sensibilities make the tale of Abdel Hakim Belhaj more than a year after Haspel's departure all the more intriguing. The Libyan, who denied ever being a member of al-Qaida, told British and French newspapers that he had been taken off a British Airways flight from Kuala Lumpur passing through Bangkok on its way to London, and interrogated at the airport for several days.

"Belhaj was detained by the CIA in Thailand in 2004 following an MI6 tipoff, allegedly tortured, and then flown to Tripoli, where he says he suffered years of abuse in one of Muammar Gaddafi's prisons," The Guardian reported in September 2011.

"I was injected with something, hung from a wall by my arms and legs and put in a container surrounded by ice," he told the newspaper.

The capture of Belhaj and his pregnant wife in Bangkok was subsequently given more credence by documents found in Gaddafi's security archives after they were overrun in 2011. Thailand's torture saga evidently did not end with Haspel's departure.