Emotions are running high this week -- in Ukraine, in Russia, across Europe and in Washington. It is said that no one should make an important decision in the heat of anger. Vladimir Putin has already made that mistake, and Asian leaders, particularly in Beijing, are watching closely. 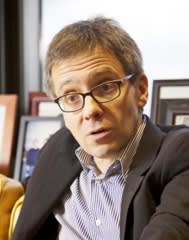 First, consider the scale of the Russian president's miscalculation. Putin's grand dream and the prime directive of Russian foreign policy is to create something that he calls the "Eurasian Union." From Moscow's point of view, Russia is far too important a country to simply join the European Union, as if Russia were Poland or the Czech Republic. Putin means for Russia to create its own union, a reconstituted Russian empire founded on the political and economic system now in place in Russia. The grand dream is off to a slow start. To date, Russia has managed to assemble only a customs union involving Kazakhstan and Belarus, both of which are reluctant to deepen political ties with the Kremlin.

The art of alienation

This is the importance of Ukraine. In 1991, Russians understood that without Ukraine, there was no Soviet Union. Today, without Ukraine, there is no Eurasian Union, no empire worthy of the name. Herein lies Putin's mistake. No one in Ukraine under the age of 28 can remember the USSR. Four months ago, even four weeks ago, many younger Ukrainians might have had mixed feelings about Moscow. They might not have liked Putin personally, but Ukraine's need for inexpensive Russian natural gas and other forms of subsidy might have created a pragmatic attitude toward Kiev's need for good relations with Moscow.

Not anymore. From the moment that Russians wearing ski masks and carrying automatic rifles arrived on Crimean streets, Putin alienated an entire generation of Ukrainians, the very people he needs to see the value of membership in a Russian-led political and economic union that might counterbalance the EU. More than 75% of Ukrainian citizens are ethnic Ukrainians. Less than 20% are ethnic Russians. Putin can impose his will in Crimea. He can frustrate Kiev's ability to maintain firm control of the country's eastern provinces, those areas where there are as many ethnic Russians as Ukrainians. He can try to use natural gas supplies as a diplomatic weapon. But he will not persuade the vast majority of Ukraine's citizens that their future is not in Europe but with Russia. Putin's determination to assert himself in the short term will have the most serious long-term consequences for Russia's ability to achieve its most important foreign policy objective.

But Putin is now damaging Russia's interests in Asia, as well. First, the invasion of Crimea adds a new sense of urgency to Europe's bid to reduce its energy dependence on potentially unreliable supplies from Russia. That process was already underway. In 2003, the EU drew 45% of its natural gas from Russia. Today that number is less than 30%. And as new supplies become available over the next decade, including from the U.S., Europe will have more options.

Russia can then turn to Asia to sell more of its energy, but Putin must recognize that events in Europe will help Beijing drive a harder bargain on price. It's true that China's commercial relations with Russia are growing; bilateral trade is set to reach $100 billion this year. Beijing and Moscow are already negotiating an important gas deal. Given China's increasingly contentious relations with Japan, Russia can be an increasingly important diplomatic ally.

But the Chinese also recognize the need to hedge their bets just as the Europeans have. If, a decade from now, Russia is fighting to maintain its influence in Kazakhstan rather than Ukraine, and if the Russians continue to threaten the use of energy exports as a tool of coercive diplomacy, Moscow can only expect the Chinese to avoid excessive energy dependence on Russia. Nor should we forget that there is a limit to China's willingness to antagonize the EU and U.S., China's top two trade partners, to court Russia, its eighth-largest partner. What's true for China is also true for Japan and Russia's other would-be long-term energy customers.

That is bad news for Russia, a country that is only becoming more dependent on the sale of oil and gas for revenue. Today, Russia draws half its state revenue from energy exports, a dependence that will only become more dangerous as Russia loses market share to countries with the culture of innovation and technical expertise needed to develop previously inaccessible supplies.

Yet, with each passing week, Russia compounds its problems by deepening its commitment to destabilize Ukraine. Asian leaders will draw their own conclusions.

Ian Bremmer is the president and founder of Eurasia Group, a global political risk research and consulting firm, and author of "Every Nation for Itself: Winners and Losers in a G-Zero World." You can follow him on Twitter @ianbremmer.