TOKYO -- Asia woke up on Monday to find that a fixture of international politics, Israeli Prime Minister Benjamin Netanyahu, had been ousted from power after a 12-year run.

Following four elections since 2019, an awkward coalition of right-wingers, liberals and an Islamist Arab party finally cobbled together a razor-thin advantage in the Knesset, Israel's parliament. Naftali Bennett, a 49-year-old nationalist and tech millionaire who has described himself as "more right-wing" than Netanyahu, was voted into the prime minister's office by a 60-59 margin.

The sheer ideological diversity of the coalition makes its policy direction difficult to gauge. But at least when it comes to Israel's international relations, Bilahari Kausikan, former permanent secretary of Singapore's Ministry of Foreign Affairs, predicted more of the same.

"There will not be any substantive change in Israeli foreign policy in any region," Kausikan told Nikkei Asia on Monday.

According to the coalition's power-sharing arrangement, Bennett is due to serve until September 2023, at which point the centrist Yair Lapid, 57, is to replace him for two years.

"I am proud of the ability to sit together with people with very different views from my own," Bennett told parliament over loud heckling, according to a translated transcript published by local media.

The transfer comes at a delicate time. Just last month, Israel was embroiled in 11 days of deadly clashes with Hamas, the Palestinian group that controls Gaza. Heavy casualties on the Palestinian side brought condemnations from Indonesia, Malaysia and Brunei -- Muslim-majority Asian countries that have no formal ties with Israel. Within Israel itself, tensions between Arab and Jewish communities boiled over into violence in the streets.

"To the citizens of Israel I say: This is a sensitive moment of political change," Bennett said. "I call on all to demonstrate maturity and restraint."

Bennett's hard-line rhetoric and advocacy for Jewish settlements in the West Bank -- land earmarked for a Palestinian state in various peace plans over the years -- have raised concerns about the future of the peace process. But most of the world is waiting to see just what kind of government it will be.

U.S. President Joe Biden was quick to congratulate Bennett over the phone.

Biden "expressed his firm intent to deepen cooperation between the United States and Israel on the many challenges and opportunities facing the region," according to the White House. He and Bennett agreed to "consult closely" on regional security issues, including Iran, and the president vowed to help "advance peace, security, and prosperity for Israelis and Palestinians," the White House said.

From Asia, Taiwan's Foreign Minister Joseph Wu extended his "warmest congratulations" to Bennett and Lapid, who will serve as Israel's top diplomat for the time being.

"This is a new beginning for #Taiwan-#Israel relations," Wu tweeted from his ministry's account. "You can count on us as a like-minded friend & reliable partner." The two sides currently have only informal diplomatic ties.

Indian Prime Minister Narendra Modi highlighted next year's 30th anniversary of "the upgradation of diplomatic relations" with Israel and said he looks forward to "deepening the strategic partnership between our two countries."

Modi also reached out to Netanyahu. "I convey my profound gratitude for your leadership and personal attention" to bilateral cooperation, he tweeted.

Though he famously sparred with former U.S. President Barack Obama, for whom Biden was vice president, Netanyahu is often credited with raising Israel's profile and forging new diplomatic relationships.

A major example would be the peace agreements struck late last year with the United Arab Emirates and other Arab neighbors that had never recognized Israel since its founding in 1948. The UAE's Foreign Ministry also welcomed Bennett and Lapid, saying it will cooperate to "advance regional peace, strengthen tolerance and coexistence, and embark upon a new era of cooperation in technology, trade, and investment."

Netanyahu's government looked to Asia, too, strengthening ties with countries such as India, Japan, Singapore and China. Kausikan painted a nuanced picture of Netanyahu's track record in the region.

"Although he did visit India, Singapore, China and Japan, Netanyahu himself did not strike me as someone with a deep personal interest in or understanding of Asia," the veteran diplomat and Middle East watcher continued. "His focus was on the U.S. and Iran, which is understandable given the importance of these countries to Israel."

Israel's progress in Asia "on Netanyahu's watch is more due to the steady efforts of Israeli diplomats, working without fanfare within the framework of national policies that predated Netanyahu, and which will continue after him," Kausikan said.

Netanyahu and his officials were able to dangle access to Israel's plethora of innovative startups. A Rand report from 2019 noted that, upon returning from a visit to China in 2013, the now-former prime minister said Beijing was interested in "three things: Israeli technology, Israeli technology and Israeli technology." 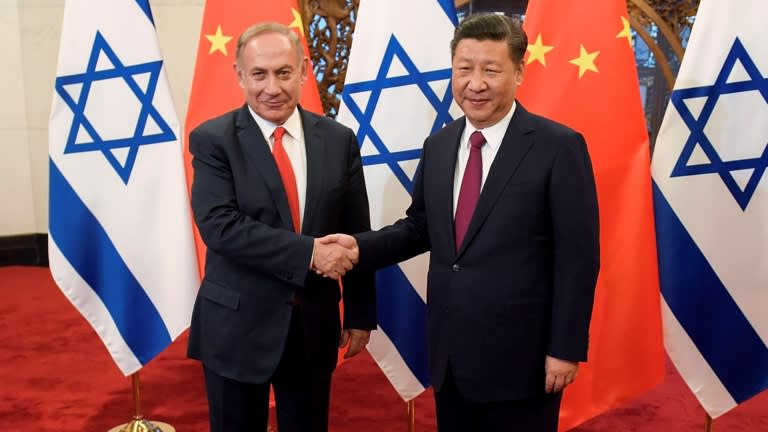 This could prove tricky for Bennett to navigate. The Jerusalem Post on Saturday noted that China Railway Construction Corp. is vying for a contract to build new light rail lines in Tel Aviv, after several past projects in the country. On June 3, CRCC was listed in a Biden executive order prohibiting U.S. investment in China's "military-industrial complex."

China, which was observing a national holiday on Monday, had yet to publicly react to Bennett's rise and Netanyahu's fall as of publication, although its state media covered his appointment.

While Bennett will have to walk a fine line between the U.S. and China, the broader goals of diversifying Israel's relationships and building bonds in Asia appear unlikely to change.

With only a one-seat edge in parliament, Bennett will have his hands full at home as he strives to keep the coalition together.

"Our principle is, we will sit together, and we will forge forward on that which we agree -- and there is much we agree on," Bennett told parliament, pointing to transport, education and other policies.

Despite his reputation as a right-wing firebrand, Bennett trumpeted his cooperation with the United Arab List party, vowing to "open a new page" in relations between the state and its Arab citizens. "We understand the plight and needs of the Arab society," he added, promising to address crime and gaps in schooling and infrastructure.

On the Palestinian issue, the new prime minister said he hopes to maintain the cease-fire with Gaza but warned Hamas that further attacks on Israeli civilians would be met with a "wall of iron." Calm, he said, would lead to "economic moves" for the Palestinians.

Looming over it all will be the newly minted opposition leader, Netanyahu, who until Sunday had seemed like a nearly invincible political survivor.

"We'll be back," Netanyahu told the Knesset, according to media reports, arguing his departure plays into the hands of Israel's enemies.

"They [Iran] are celebrating because they understand that starting today there will be a weak and unstable government that will align with the dictates of the international community."