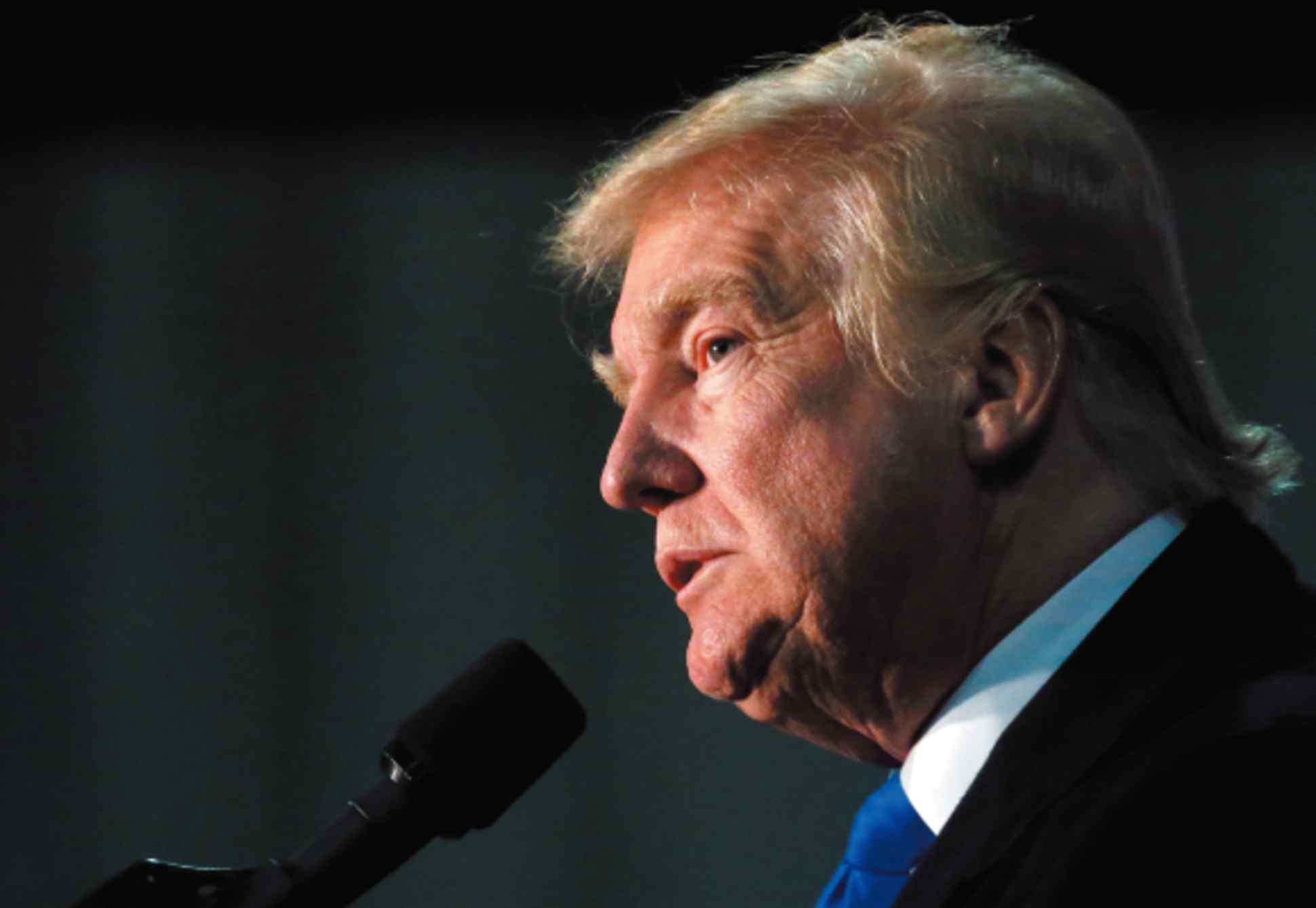 TOKYO -- Just days after Donald Trump was elected president, SoftBank Group CEO Masayoshi Son contacted an acquaintance with ties to the incoming U.S. leader. "I want to meet Donald Trump," Son said. "Would you be able to help?"

That acquaintance is believed to be the American casino magnate and major Trump campaign donor Sheldon Adelson. Son got to know Adelson 23 years ago, when as an unknown software distributor he bought the renowned computer expo Comdex from the now 83-year-old.

The meeting was arranged, and Son was invited to Trump Tower in New York on Dec. 6. Son flew from Tokyo in his private jet. On a cloudy afternoon, he donned a sweater and tie -- both red, the Republican Party color -- and headed to Fifth Avenue. Visitors to Trump Tower change elevators midway to go up to Trump's penthouse, which occupies the top three floors of the 68-story building. Although the building actually has only 58 stories, it is marked as 68 due to the tall public atrium, which is calculated as being equivalent to 10 floors.

"Call me Masa," Son told Trump. "We own Sprint and ARM," he said, introducing his two major acquisitions. Then he showed a document explaining that he and his friends were planning to invest $50 billion and create 50,000 jobs in the U.S. in the next four years -- not coincidentally during Trump's first term.

One of those friends included Terry Gou, CEO of iPhone assembler Hon Hai Precision Industry, otherwise known as Foxconn Technology Group. SoftBank is Foxconn's alliance partner. When Son contacted Gou to inform him of the upcoming meeting with Trump, it was Gou who requested that Son tell Trump about Foxconn's plans for U.S. investment, according to sources familiar with the planning. For Son, it was another element he could throw into the package.

"I'll walk you out," a satisfied Trump said and took Son down to the entrance lobby, where dozens of journalists were camping out. "This is Masa of SoftBank from Japan. And he's just agreed to invest $50 billion in the U.S. and 50,000 jobs. He's one of the great men of industry," Trump announced proudly.

After Trump had left, Son was showered with questions from the U.S. media. "No, no, we don't make Apple phones. My friend makes Apple phones," he told reporters, referring to Foxconn's Gou. "We are SoftBank. We own Sprint."

Arranging face-to-face meetings with key players and building on the resulting personal relationships is an approach Son has hewed to throughout his career. It has proven tremendously successful, one notable example being when he went to meet Apple's Steve Jobs and persuaded him to give Son exclusive rights to distribute the future iPhone in Japan.

With the election of the unconventional Trump, Son saw an opening to revisit his plan to buy U.S. carrier T-Mobile, which he had tried to merge with Sprint before being shot down by regulators in 2014. Now, with key regulators set to retire and a new administration coming in, the shrewd Son did not waste any time.

While the likes of Son and fellow alliance partner Jack Ma Yun of China's e-commerce giant Alibaba Group Holding are happily paying homage to the new U.S. leader, traditional "establishment" companies such as Ford Motor and Toyota Motor are having a harder time. The major automotive companies have relied on K Street lobbying firms to protect their interests and build ties on Capitol Hill and with the Washington bureaucracy for many years. That conventional formula now looks in jeopardy.

The signs of change emanating from Trump Tower are being watched by governments and companies around the world. One popular view is that there will be more emphasis on personal relationships and that policies will focus on specific, short-term interests, rather than a long-term strategy to maintain stability. The dull, tiresome, housekeeping-like chore of alliance management looks to factor less in a Trump world.

"Trump's foreign policy is going to look more Chinese," Ian Bremmer, president of the Eurasia Group, told the Nikkei Asian Review. "It's unilateral. It's transactional. It focuses narrowly on American national interests. Allies are useful as long as they're giving you something that works."

Business leaders in Asia who believe they can be "useful" to Trump are eager to cash in. Several thousand miles away, in Jakarta, billionaire developer Hary Tanoesoedibjo is celebrating his early investment. The chairman and CEO of MNC Group has two luxury hotel projects being developed with Trump -- a 100-hectare, six-star luxury resort on the coast of Bali and a Trump-branded hotel outside the Indonesian capital.

Tanoe, as he is known, visited Trump in New York in August 2015 to sign the first of those deals. "I am personally very pleased to bring the Trump brand into Indonesia," Tanoe said. The two sides followed up quickly by announcing the second project the following month.

Following Trump's unexpected victory, Tanoe has begun to contemplate a presidential run himself. "If there is no one I can believe who can fix the problems of the country, I may try to run for president," he told the Australian Broadcasting Corp. in January. If Tanoe is successful, it would result in the rare case of two world leaders also being business partners.

Meanwhile, in India, Sagar Chordia, the director of Panchshil Realty, looked back on a recent meeting with Trump with a sense of accomplishment. Soon after the U.S. election in November, Chordia and his business partners held a meeting with Trump in which the president-elect praised Indian Prime Minister Narendra Modi for "doing a great job," according to the Economic Times.

Trump has five luxury projects in India, including a Trump Tower, a 46-apartment block developed with Panchshil in Pune in western Maharashtra state, and a 300-apartment project under construction in Mumbai with the Lodha Group.

However, Trump's stated intention to bring back millions of jobs that Americans have lost to foreigners has triggered concerns in India that the new U.S. administration may restrict the issuance of H-1B visas, most of which are claimed by Indian information technology companies -- which rely on the U.S. for 60% of their revenue. Personal relationships alone may not be a cure-all.

Asian governments are borrowing from the business sector's playbook, trying to connect with Trump as soon as possible.

"Great to reconnect with President-elect Donald J. Trump following his outstanding win. Earlier today we had a very warm and productive telephone conversation," Malaysian Prime Minister Najib Razak wrote on Facebook on Nov. 27. The two politicians had teamed up in a golf game several years ago, and Trump had presented Najib with an autographed photo bearing a personal message: "To my favorite Prime Minister. Great win."

During the phone call, both countries agreed to strengthen ties further, Najib wrote. This came after authorities in the U.S. filed a civil suit last July to recover more than $1 billion worth of assets they believe were bought illegally using money from a Malaysian state fund. The U.S. Department of Justice named Najib's stepson as one of the key people involved.

Even those without previous ties to Trump have sensed the need to reach out to him early. Vietnamese Prime Minister Nguyen Xuan Phuc talked to Trump by phone in mid-December, in an unprecedented discussion with a U.S. leader who has yet to take office. What type of person is Trump? That is a question that companies and governments around the world have been asking.

When Barack Obama was elected U.S. president in 2008, the Japanese government conducted an analysis of him. The result was not positive. Obama was the type of person who did not actively seek to build strong personal relationships with other leaders. They cited an incident from when Obama was younger. A girlfriend had told Obama that she loved him. Rather than reciprocating, Obama stood for a moment in silence and finally squeezed out, "Thank you."

An initial analysis of Trump showed that this was a leader who could be more easily pursuaded by the people he talked to. After several sessions with diplomatic advisers, Japanese Prime Minister Shinzo Abe insisted that he had to meet Trump as early as possible, hopefully ahead of the Chinese.

"Enough with the predictions about what the Trump presidency may or may not be," Abe said. Rather than taking a wait-and-see approach, we should engage with Trump's team and steer the debate in a direction that is beneficial to us, Abe told his advisors.

Through connections with Trump's son-in-law Jared Kushner, which the Japanese Embassy in Washington had been cultivating, Abe's team managed to arrange a meeting on Nov. 17 -- the first such meeting Trump had with a foreign leader.

Abe is preparing for a second meeting with the new president, one week after the Jan. 20 inauguration. Convincing the new American leader to work with Japan on securing long-term benefits for both sides, as opposed to quick gains that may prove fleeting, is the key message the Japanese side wants to convey.

"We have to watch our wording," a senior Japanese diplomat told the Nikkei Asian Review. "We certainly do not want to sound like we are preaching."

Abe and his interpreter will be practicing their lines in the days ahead.