Asian consumers push for right to use smoking alternatives

HONG KONG -- Joe Lo, 37, has been using an electronic cigarette alternative known as IQOS instead of traditional cigarettes for a year. It heats tobacco but only gives off some smoke-like vapor. The insurance salesman in Hong Kong, who smoked for 14 years, no longer worries about his four-year-old son rebuffing his hugs saying "No, Daddy, you're so smelly!"

But there is one problem: He depends on a friend who travels frequently on business to Japan to get tobacco sticks for his IQOS, because they are not available in Hong Kong.

In much of Asia-Pacific, new devices are either illegal or, as in Hong Kong, in a regulatory gray area that keeps them off store shelves. Now with users on the rise, consumers are joining together to pressure the authorities for explicit legalization of what they feel are healthier alternatives and are starting to have some political impact.

In the past three years, consumers have formed vape-advocacy organizations in Australia, India, Malaysia, New Zealand, the Philippines and Thailand. The International Network of Nicotine Consumer Organisations, an umbrella group, is lobbying for change in places including Hong Kong, Indonesia, Singapore and Taiwan. Its Asian members gathered last December in Bangkok to plan a concerted lobbying effort.

"There was an unprecedented feeling among delegates that they are no longer alone, that they are part of a regional and even global movement for change," said Nancy Sutthoff, the president of INNCO's board. 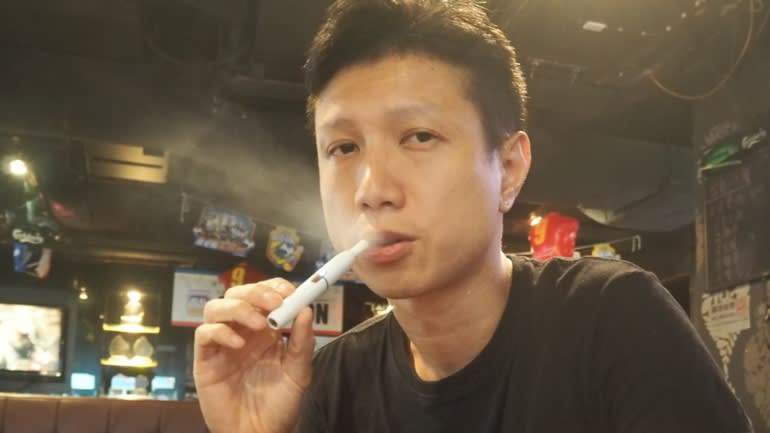 Joe Lo, an IQOS user, depends on a friend who travels frequently on business to Japan to get tobacco sticks for his IQOS. (Photo by Alex Frew McMillan)

There are two main forms of cigarette alternative. One constitutes "heat-not-burn" products that warm tobacco, use a filter and often a half-size stick. They give off vapor for users to inhale. Vaping devices, more generally called e-cigarettes, heat a flavored liquid containing nicotine salts to produce a steam-like vapor.

South Korea and New Zealand legalized the various cigarette alternatives in 2010 and 2018 respectively. Japan, although still banning liquid-type e-cigarettes, allows tobacco-heating devices like IQOS, which is made by Philip Morris International. In contrast, Australia, Indonesia, Singapore, Thailand and Vietnam have explicit bans.

In the Asia-Pacific region, the liveliest public-health debate is in Australia. Some doctors see the merits of encouraging options while others are loath to encourage a new form of nicotine delivery. Despite the legal restrictions, there are 240,000 Australian alternative device users, according to government data.

Brian Marlow, who heads the lobby group Legalise Vaping in Australia, recently organized a bus tour to 28 cities to raise the profile of cigarette alternatives with the public and politicians. Legislator Cory Bernardi in February drove the bus around Parliament House in Canberra.

"A lot of MPs weren't even aware that nicotine liquids were illegal to own here, let alone sell them," Marlow said. "They see vapers here, so they just assume vaping is legal."

Hong Kong's Legislative Council has begun debate on a proposal to regulate vaping and heat-not-burn products, thanks to a push by pro-liberalization members including Helena Wong. As discussion began in June on the proposal, supporters presented Wong with a petition bearing 10,000 signatures. Peter Shiu, who represents the retail and wholesale trade in the legislature, said that 10% of Hong Kong's 600,000 smokers have switched to alternatives. IQOS is one of the most popular smoking alternative devices in Japan. (Photo by Katsuhiko Hara)

The government however is guarded about the legalization proposal. Secretary for Food and Health Sophia Chan said in June that her department is "very concerned about the existence of e-cigarettes ... [because] there are many unknown constituents or components," some of which have been shown to be harmful. There has been little to no third-party research in Asia on the health effects.

In New Zealand, vape store owners and groups such as the Aotearoa Vape Community Advocacy pushed for legalization of the habit -- it had previously been legal to import nicotine for personal use but not to sell it. A court ruling in May stated that vape and heated-tobacco products could be sold under existing tobacco laws. Quitline, a government service to help consumers stop smoking, now says vaping is better than smoking and helps people to quit.

Australian lawmakers are under pressure now that New Zealand and Canada have both legalized vaping. "These are countries we compare ourselves with," said Colin Mendelsohn, associate professor of public health and community medicine at the University of New South Wales and chairman of Australian Tobacco Harm Reduction Association. "If Australia does make progress in this area, it will be very influential to other Asian countries. Drug policy in Australia has been very instrumental in Asia."

"Allowing smoking and banning vaping is costing lives," Mendelsohn said. "The government just needs to get out of the way and let people get on with leading their lives, as long as they are not harming anyone else."

Even smokers are often unaware that nicotine is not the cancer-causing agent in cigarettes, though it is highly addictive. Producers such as Philip Morris International and Japan Tobacco claim that it is the smoke that causes problems to health, and therefore alternatives have far fewer risks to health.

"[Alternatives] are not accessible to a lot of the people who need to quit, from disadvantaged backgrounds or minorities," said Mendelsohn. "A lot of people aren't being reached who most need the help."

In 2014, the World Health Organization issued a report on e-cigarettes and urged member states to restrict advertising, arguing that the health implications had yet to be assessed carefully. It added that there had been some reported cases of eye irritation and throat pain among vapers. The WHO also asked states to ban e-cigarettes indoors until they are proven to be completely safe to people nearby.