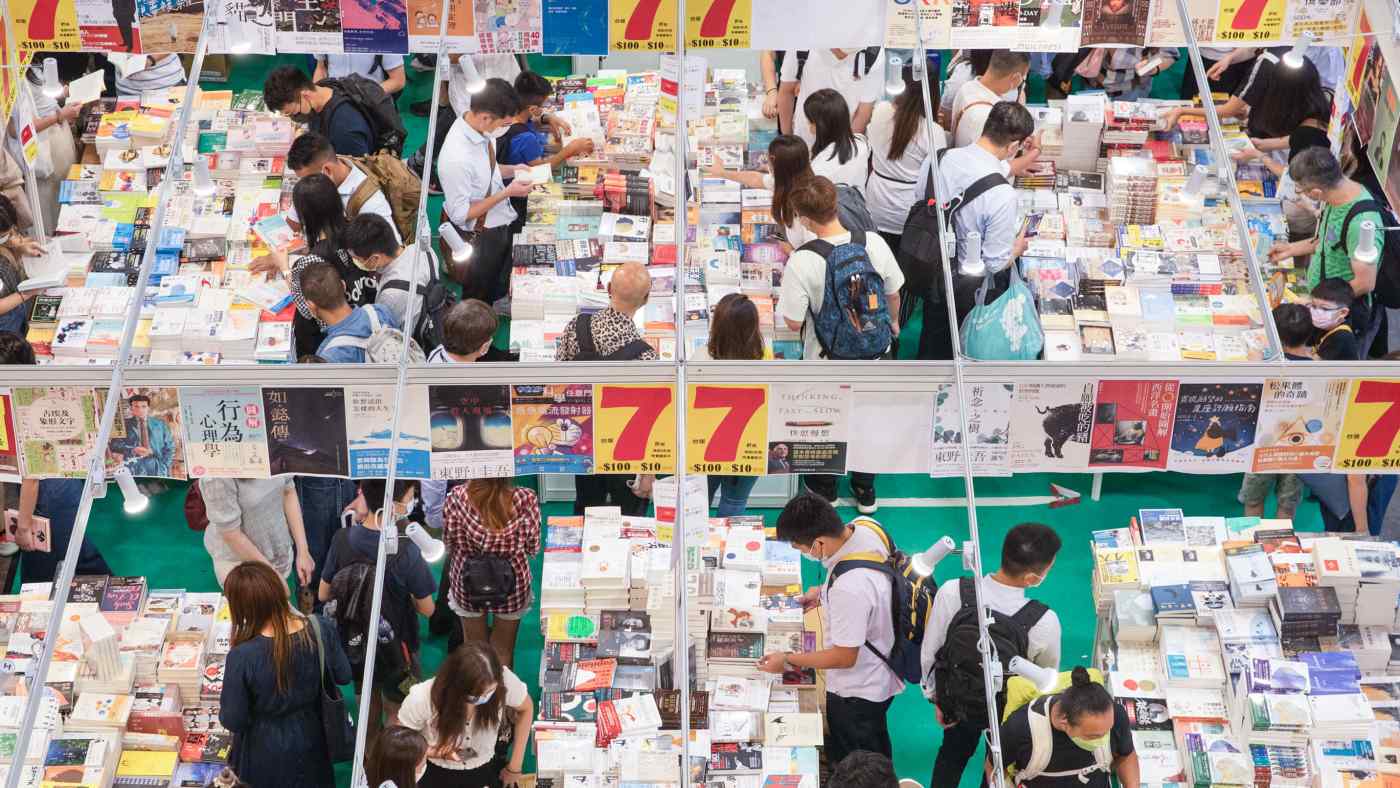 People browse books at the Hong Kong Book Fair on July 19. The event was once regarded as a symbol of publishing freedom in the territory under the "one country, two systems" arrangement.   © Getty Images
KENJI KAWASE and STELLA WONG, Nikkei staff writersJuly 21, 2021 16:24 JST | Hong Kong
CopyCopied

The event, a major book exhibit in the Chinese-speaking world, once was regarded as a symbol of publishing freedom in the territory under the "one country, two systems" arrangement. But this year's fair was the first held under the national security law imposed by Beijing in June 2020. Attendance sank to an estimated 830,000 from 1 million two years ago, with last year's edition canceled due to the pandemic.

Publishers, booksellers and authors faced heavy pressure to steer clear of any exhibits that could be deemed violations of the security law, yet the "red line" was unclear to many.

Most exhibitors refrained from testing for that red line, choosing to self-censor the material they brought. However, a few braved warnings by the organizer, the Hong Kong Trade Development Council, which said it would report to relevant authorities concerning the security law.

Exhibitors who took a bold stance were rewarded.

"This is beyond expectation," Sam Cheng, co-founder of Hillway Culture, told Nikkei Asia on Tuesday. Five of the six main books displayed by the independent publisher sold out during the event.

These books depict the period related to Hong Kong's anti-government protests before the national security law was enacted and cover the city's past 180 years with a narrative different from what Beijing prefers.

Hillway Culture received notice from the organizer during the event that three of the titles were alleged to violate the law. But no action was taken. The publisher was "absolutely confident" that it did not cross the red line, based on careful study of the law and the contents of the books over the past two months before the fair.

Cheng did not disclose how many books were sold, but said it was "in the thousands" -- well beyond his prediction. The revenue was reassuring, as were the comments that staff received from customers throughout the fair.

"These words were encouraging," he said.

Kind of Culture was another independent publisher that sold books carrying political content despite the widespread fear among exhibitors. Three of its titles went out of stock during the event, but Kind of Culture replenished two of them to meet the demand for books on the 2019 protests against Hong Kong's extradition bill.

Like Hillway, the publisher received complaints from the organizer that two of its books were suspected of being in violation of the security law, while a pro-Beijing group claimed Kind of Culture's postcards capturing Hong Kong's protest scenes in 2019 were illegal.

The author of one of the books eventually withdrew, as did the creator of the postcards. But the publisher kept the other book, which was one of the two titles restocked on Tuesday.

Daniel Wong, the publisher's founder, told Nikkei Asia that politics are what Hong Kongers now care about most, as everyone has been affected, especially since the security law was imposed a year ago.

"As a part of the publishing industry, we have the responsibility to fulfill the demand, instead of being worried about personal safety," he said.

At the 2019 book fair, Kind of Culture set up a Lennon Wall at its booth, which was quickly filled with colorful sticky notes carrying supportive messages for the protests. The publisher did not create a similar wall this year, but it printed 1,000 booklets with photos of the memos for visitors to take for free.

A 72-year-old visitor, who wished to be identified as Ms. Chan, was looking for a particular book about frontline journalists' experiences reporting on the Hong Kong protests at Kind of Culture's booth on Tuesday. It was sold out when she visited a few days earlier, and she returned on the last day to try her luck again.

Though the title was not restocked, she picked up other political books at the booth. 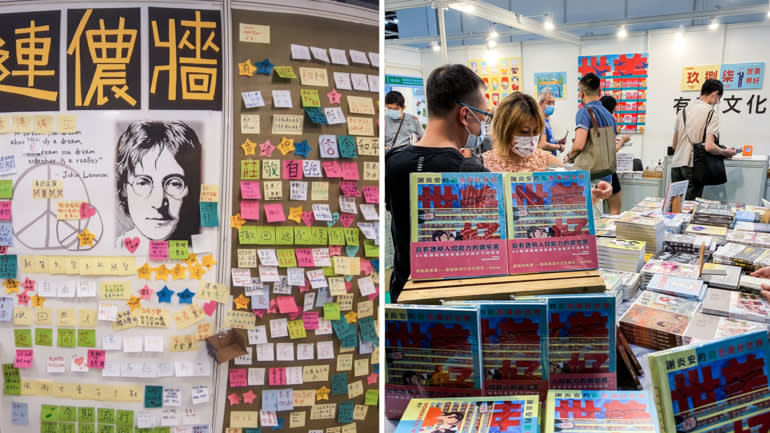 Kind of Culture set up a Lennon Wall at its booth during the 2019 book fair, left. This year, it only offered free booklets with photos of the memos. (Photos by Stella Wong and Kenji Kawase)

"This is a part of Hong Kong's history," she said. "I think this part will not be written down in the official history. If I own these books, I will own this part of history."

As a lover of political books who visits the fair every year, though, Chan saw fewer items of interest this time.

Self-censorship went much further for some publishers. Johnny Lau, a prominent political commentator, told Nikkei Asia that his latest work -- covering Hong Kong and the centennial of the Chinese Communist Party -- "did not get published and did not appear at the book fair." Lau spent years preparing the book.

The popular author of nine books had never experienced this. Lau said he meticulously designed the content to be fair, carrying both positive and negative aspects of the party's roles and interactions with Hong Kong.

"But I don't blame the publisher on this," the veteran political analyst said, because he understands the pressure publishers have faced during the past year. As the topic was quite well timed and politically sensitive, Lau suspects the publisher "rather thought they would play it safe."

The chill spread to a "mini book fair" run by around 20 independent publishers and bookstores in the city. The event is held at an old building in Wan Chai, the same district where the bigger fair took place. Ho Hang-yuen, co-organizer of the smaller fair, confirmed to Nikkei Asia that items reported by a pro-Beijing newspaper as "stepping on the red line" were all taken down by exhibitors.

The items included a translated version of the French parable "Brown Morning," already removed from public libraries. The Chinese book title carries a pronunciation that sounds like "good dog from China."

"The publisher eventually decided to take it down, because of worry that the entire company may be targeted in different ways," she said. "They decided to keep a low profile at this time for the safety of their employees."

Daniel Lee, founder of Hong Kong Readers, an independent bookstore that participates in the mini fair, said the books he sells at the fair are similar to those at his store in the city. But Lee has decided not to sell some books published in Taiwan, neither at his store nor the fair, including one that contains pro-independence ideology.

"It is quite obvious that the stream of independent bookstores and publishers is diminishing," he said. "Printing houses also avoid printing political books. These are the very obvious impacts of the [security law]."

Ho said she has never seen so many visitors at the mini fair, and she expects this year will be the best in terms of sales. The fair, which runs for two more weeks, was first held four years ago.

"In one to two years, people are more supportive of books from independent publishers," Ho said.

Such publishers offer "books aligned with the situation of the society," she said. "These books stir up people's feelings easily, as they feel that these are the books we need in this era."