At the end of a dark week, Taiwanese values shine through People pay their respects to the victims of the "White Terror" at a memorial in Taipei on July 15.
KENSAKU IHARA, Nikkei staff writerJuly 15, 2017 23:48 JST | Taiwan
CopyCopied

The day marked 30 years since martial law was lifted. Before that, the island had been under iron rule for 38 years -- among the longest such stretches in modern history.

The anniversary comes at a crucial moment, one that seems to call for Taiwanese to reflect on and value their democratic trajectory. On Thursday, Liu Xiaobo, the Nobel Peace Prize-winning human rights activist serving an 11-year jail term for co-authoring a manifesto calling for democracy in 2008, died in China. He was granted medical parole only after his liver cancer reached a terminal stage, but he remained under custody and was not allowed to be treated abroad, despite his wishes and those of his family.

The island has indeed chosen a different path than Beijing. 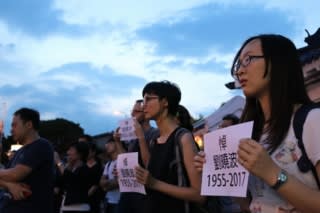 Some residents of Taipei hold a silent vigil for Liu Xiaobo on July 14. (Photo by Kensaku Ihara)

"Our scars have yet to heal," said a woman at a ceremony marking the anniversary in Taipei on Saturday morning.

Iron rule was introduced in 1949, when the Kuomintang government commenced to strictly restrict freedom of expression, even if that meant mobilizing armed forces against pro-democracy activists. The oppression became known as the White Terror, and some estimates say more than 200,000 people were victimized, though no complete picture exists.

Late last year, the government of President Tsai Ing-wen, who heads the Democratic Progressive Party, announced that it would prove the Kuomintang's responsibility for the White Terror, pledging to compile a fact-finding report within three years.

The Kuomintang on Friday issued a statement saying that the development of Taiwan's democratic society should be attributed to late President Chiang Ching-kuo's "brave decision" to lift martial law. The statement went on to accuse the DPP of fanning social confrontation and destroying the core values of Taiwanese society.

The lifting of martial law was a victory won by Taiwanese citizens who endured oppression and called for democracy, Tsai added, stressing the need for Taiwanese society to remain as one.

Tsai's message is thought to be aimed at China rather than the ebbing Kuomintang. Beijing has been tightening the screws on Taiwan, which it considers part of China.

On Friday evening here, some 100 people attended a gathering for Liu at the National Chiang Kai-shek Memorial Hall. Photos and films were exhibited. A moment of silence was observed, and flowers laid.

Among those in attendance was Yu Mei-nu, a DPP member of the legislature, who expressed hope that Chinese people will carry on Liu's quest for democracy.

Daniel Wu, a 23-year-old university student in Taipei, also attended the gathering. He said he feels a threat from a China that pursues Taiwan while suppressing human rights and democratic values.

He said, "The young people of Taiwan, who have grown up knowing only freedom, should work to protect the democracy that their elders gave them by toppling martial law."

Syaru Shirley Lin, a professor at the Chinese University of Hong Kong and a specialist in Taiwan and Hong Kong affairs, noted there is more at stake than democracy.

"The death of Liu Xiaobo is a tragic reminder that today's China is totally different from Taiwan, especially in terms of fundamental values," she said. "Since martial law was lifted 30 years ago, freedom of speech and the press has become taken for granted on the island, and Taiwanese take pride in participating in a flourishing civil society.

"While China often says the Taiwanese and Chinese share common blood, common blood does not [equate to] common values. And in today's world, values are what define us."