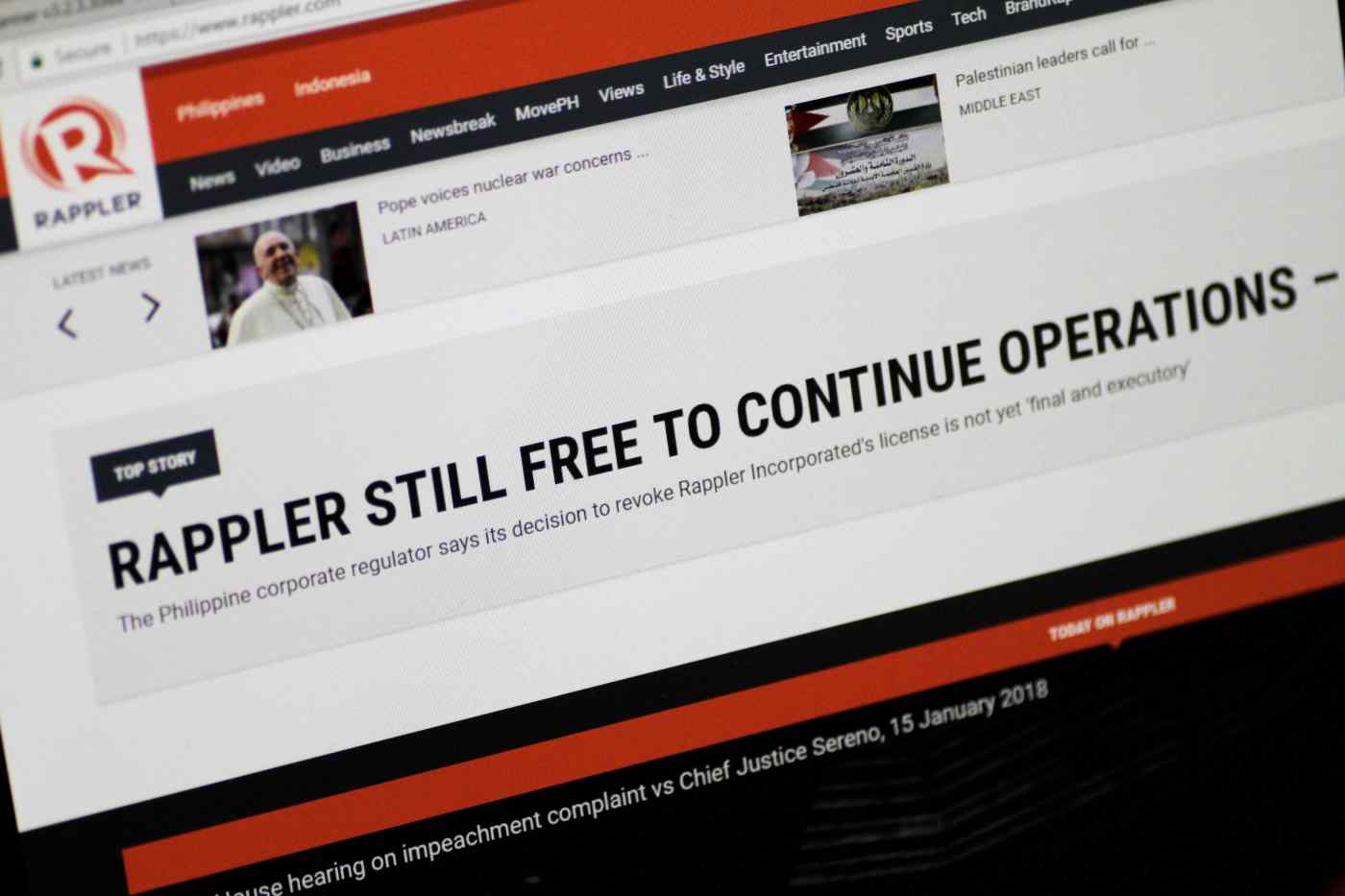 The Rappler website reports on news of the regulator's decision to revoke the news operator's license.   © Reuters
CopyCopied

I was with Rappler, the independent Philippine news site that is now threatened with closure, from the beginning, and consider it my home.

From its launch in 2012, reporting for Rappler meant not looking over your shoulder to check if an investor or an advertiser was going to be displeased. We did not tell ourselves we were going to be brave. We just simply did our job with public interest as our mantra and, in the process, we found the courage to speak truth to power. It worked: Rappler today has 100 staff and attracts 40 million page views a month making it the top online-only news site in the Philippines.

But Rappler has now become the latest target in President Rodrigo Duterte's rising intolerance of criticism from the press. The order of the Securities and Exchange Commission (SEC) to revoke Rappler's license to operate is the first step to shutter the news site which has reported extensively on Duterte's deadly drug war and the manipulation of information and public opinion using state resources.

The Philippines, which always prided itself as having the most robust and free press in Southeast Asia, has now joined the ranks of countries where the media are in peril.

Now editor-at-large at Rappler, I will never forget my first story, which, in a way, launched the site: It was about a university that broke its rules to grant the Supreme Court chief justice a Ph.D.

It was exciting to break this exclusive news -- but I worried for Rappler's image, that advertisers may get scared. Happily, the editors allayed my fears -- and set the tone for the site.

While work was rarely easy, the concerns we had about speaking the truth about the powerful were magnified after President Duterte took office and launched wide-ranging assaults on critics and opponents, including in the media. I am currently on book leave from Rappler but plan to return to work next month -- assuming I still have an employer.

Last year, Duterte went after the owners of a leading newspaper, the Philippine Daily Inquirer, known for coverage critical of the government. The owners were accused of evading taxes. Soon after, they sold their stake to a business tycoon close to the president.

Now Rappler is in his sights. Duterte, in his state of the nation address last year, accused Rappler of being "fully owned" by Americans, a serious offense in the Philippines because the constitution allows only Filipinos to own media companies. But it was not true.

Rappler is 100% owned by Filipinos even if some of its investors are foreign groups like Omidyar Network and Northbase Media. They have used Philippine Depositary Receipts, special financial instruments, to acquire commercial interests in Rappler, without owning a fraction of the company, or having any voting rights or a say in its management.

"Lack of due process"

But, the SEC ruled this month that Rappler breached the constitutional provision on media ownership, a decision that Centerlaw, a group of human rights lawyers, said "smacked of a lack of due process."

Rappler will appeal this, a legal battle that will pit government versus a start-up news site that has no backing from the political elite. It will be a fight for independent journalism in a country whose democracy is dwindling.

As the Center for Media Freedom and Responsibility put it, "What is at stake is the loss of truth telling, of press freedom and democracy itself."

To understand why this is happening, we need to know Duterte. A city mayor for 20 years, he has been used to ruling like an autocrat. Among the first things he did as president was to send his most vocal critic, a former human rights commission chair, Senator Leila de Lima, to jail on trumped-up drug charges. She has been in prison for almost a year, Duterte's Exhibit A for potential political dissenters.

Later, the president fired the head of a government agency, the Dangerous Drugs Board, who did not agree with his figure of 4 million drug users in the country, plucked from thin air. Benjamin Reyes used a much lower figure of 1.8 million based on a scientific survey. Reyes is Exhibit B for bureaucrats who might contradict the president.

Working with co-equal government branches is alien to Duterte. He has sweeping control of the House of Representatives, which is typical in Philippine politics. But he also wants control of the judiciary as his allies have started the process to impeach the Supreme Court chief justice, Maria Lourdes Sereno, who differed with the president on the drug war. He is packing the court with his appointees and, during his six-year term, will appoint 12 of the 15 justices.

One by one, the institutions in the country are falling under the president's grip. "The last one standing is the press," says freedom of information advocate Vincent Lazatin. "We lose the press, we lose hope for our democracy."

Rappler is in a unique and vulnerable position, as the only purely online news organization in the Philippines. It has no Plan B to fall back on: no newspaper, TV or radio business to shore it up. It has also reached a scale, both in audience reach and the size of its staff, that is bigger than what other earlier independent media groups have achieved.

I speak from experience. Many years ago, I was editor of Newsbreak, a print political magazine. The New York Times described it as spunky and "has more than demonstrated its independence from the privileged and powerful." We came under a lot of pressure from the highest offices in government and vested interests, which made it difficult to grow. In 2007, we folded.

This is not an unusual story in the Philippines, where big business, for fear of displeasing the powerful, do not put advertising money in independent media.

Rappler's owners are journalists and businessmen. There are no vested interests. There is no single controlling voice except that of editorial independence. To have reached this far is a remarkable feat.

As a study by Vera Files and Reporters without Borders on media ownership says, "Philippine media continue to be owned by and to depend on the economic and political elite. Five families in the Forbes List of 2016 Philippines Richest are in media, four of whom made their money predominantly from media."

Two of the large TV networks dominate the market -- ABS-CBN Corp., owned by the Lopez family, and GMA Network, which belongs to the Jimenez, Duavit and Gozon families. Most Filipinos get their news and information from these two sources.

Duterte's move against Rappler will clearly further entrench this system. As, presumably, the president intends.

Marites Danguilan Vitug, editor-at-large at Rappler, has been a journalist for more than 30 years. She has written seven books on Philippine current affairs.