SYDNEY -- Feeling the heat from an ever more assertive China, Australia is ramping up its defenses -- from cracking down on foreign deals to joint arms development with Washington -- against Chinese influence in the Asia-Pacific region and within its own borders.

Ties between Canberra and Beijing have steadily deteriorated in recent months as the countries clash over a range of issues, including the coronavirus pandemic and trade. Recent moves in Australia could further stoke bilateral tensions.

On Tuesday, parliament passed a law that empowers the foreign minister to scrap agreements between foreign countries and Australia's local governments or universities that are deemed detrimental to national foreign policy. About 130 agreements could potentially be affected by the law, 48 of which are with China, Australian media report.

Under Australia's federal system, each state has the authority make its own rules on such issues as education, property management and the environment. Local governments also tend to handle cultural exchanges with foreign entities, like sister-city agreements.

But the constitution states that parliament shall legislate on matters related to "external affairs." The new law is designed to clarify that matters tied to foreign relations is reserved for the federal government.

The legislation was drafted partly in response to a contentious memorandum of understanding signed by the state of Victoria in October 2018 in support of China's Belt and Road infrastructure-building initiative. The Victoria government is controlled by the Labor Party, which is part of the opposition in the national parliament.

Prime Minister Scott Morrison, who is a member of the Liberal Party, has publicly rebuked the Victoria deal for undercutting national foreign policy.

"This legislation is necessary to appropriately manage and protect Australia's foreign relations and the consistency of our nation's foreign policy," Australian Foreign Minister Marise Payne said in a Tuesday statement.

Parliament followed up by passing legislation Wednesday requiring all foreign acquisition of land or businesses that could affect the country's national interest to be screened first by the Federal Investment Review Board. Previously, deals valued at 275 million Australian dollars ($205 million) or less were exempt from review. The change was likely intended to hinder Chinese investments in ports and other important infrastructure.

Australia is putting China on notice on the defense front as well. Last week, Defense Minister Linda Reynolds announced a joint development project with the U.S. for a prototype hypersonic cruise missile. Canberra plans to invest A$9.3 billion in this and other related programs.

Such weapons are considered capable of evading missile defense systems. China is developing a hypersonic missile arsenal of its own. 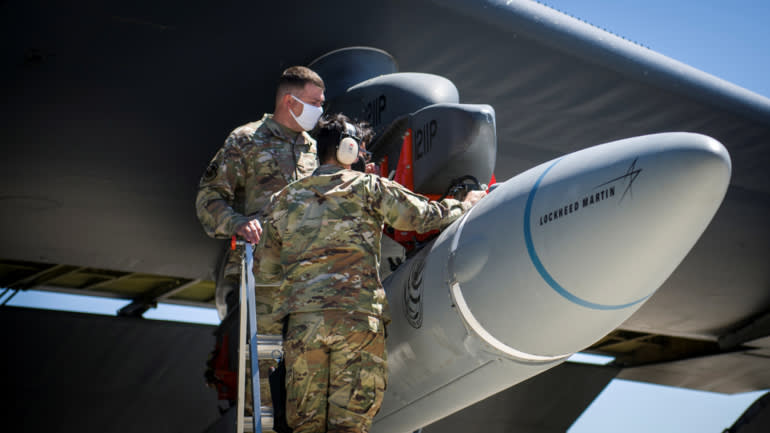 A U.S. hypersonic missile prototype is mounted under the wing of a B-52H Stratofortress at Edwards Air Force Base.   © Reuters

The move appears to be in response to the mounting military threat China poses in the Indo-Pacific region.

"The Morrison government remains committed to keeping Australians safe, while protecting the nation's interests in a rapidly changing global environment," Reynolds said in a statement.

China's image is also beginning to sour outside the halls of government. An incident at an island in Australia's northeast threatened to generate anger among Australian public. A Chinese enterprise that took out a lease last year to develop parts of the island blocked private planes from accessing an airstrip, according to a resident interviewed recently by the Australian Broadcasting Corp.

The Chinese enterprise has run into trouble with locals by operating heavy machinery on beaches and posting "keep out" signs, according to the report.

Canberra's relationship with Beijing is a complex one. China is the country's biggest trading partner, accounting for over 30% of exports. But even against this backdrop of friendly trading, Australia has suspected China of meddling in internal affairs since 2017.

In 2018, the Australian government banned Huawei Technologies from participating in the 5G market, which increased bilateral tensions.

Relations decidedly grew worse this year when Morrison requested an independent study on the origin of the novel coronavirus in April as the pandemic swept across the world. The next month, China halted imports of several Australian meat products, and slapped an 80%-plus tariff on Australian barley.

Australia attempted to solve the matter through diplomatic channels, but Beijing came back with trade sanctions that extended to cotton, coal, lobster and wood products.

China's litany of sanctions "is completely incompatible with thecommitments that China has given through the China-Australia Free Trade Agreement," Birmingham said. Soon afterward, another diplomatic row erupted when Zhao Lijian, spokesperson for China's Foreign Ministry, tweeted a fabricated image of an Australian soldier holding a bloodied knife against the throat of an Afghan child. Morrison demanded an apology during a press briefing.

For bilateral relations to improve, the two sides need some time to cool down, said Richard McGregor, senior fellow at the Lowy Institute, an Australian think tank. The next step could be a small joint project, such as those concerning infrastructure development, McGregor added.

At the same time, McGregor estimated it may take one to two years before China lifts its trade restrictions on Australia, indicating that the solution to the discord will not be resolved in the short term.