Albanese sworn in as Australia PM ahead of Tokyo summit 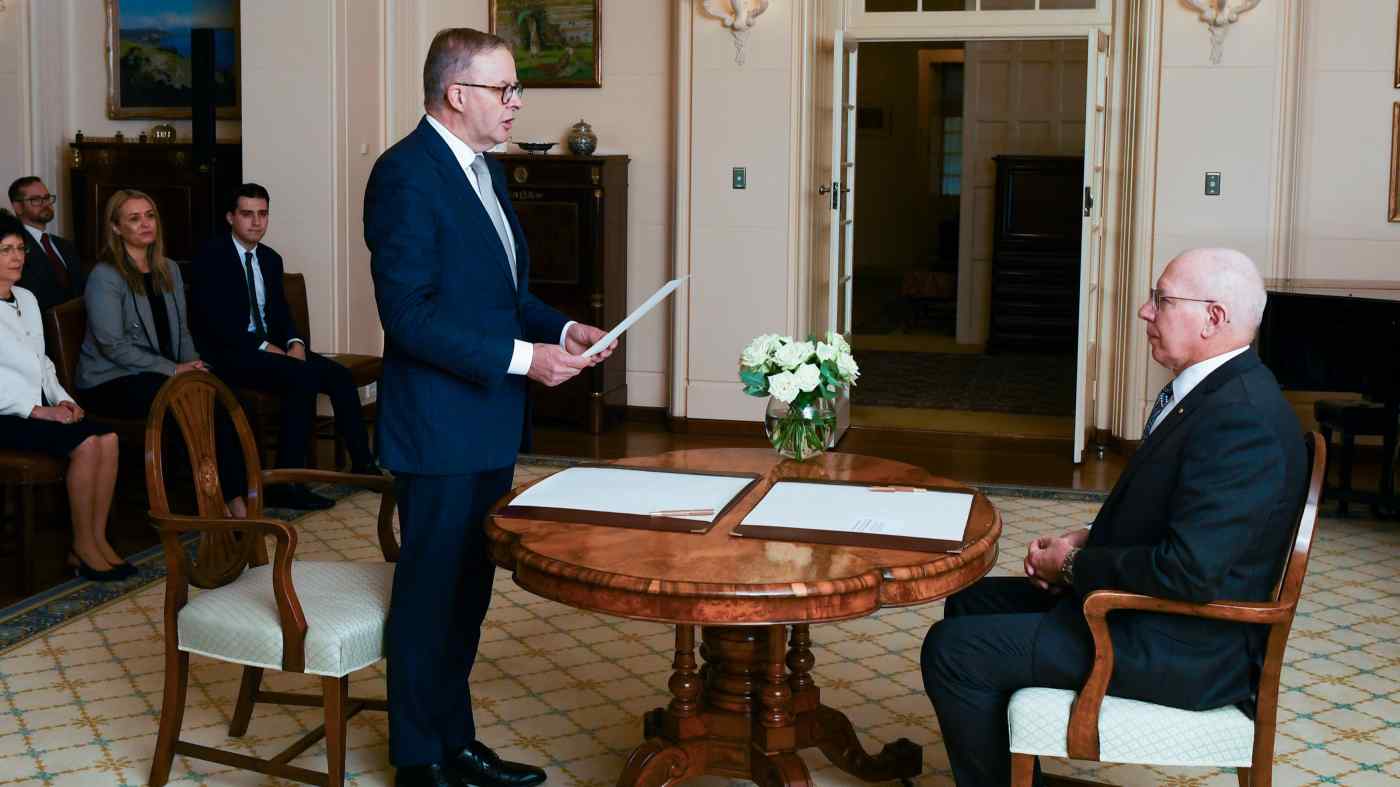 CANBERRA (AP) -- Australia's new prime minister was sworn in Monday and flew to Tokyo for a summit with President Joe Biden while vote counting continued to determine whether he will control a majority in a Parliament that is demanding tougher action on climate change.

"I want to lead a government that has the same sentiment of optimism and hope that I think defines the Australian people," Albanese said in his hometown of Sydney before flying to the national capital Canberra to be sworn in.

Albanese, who describes himself as the first ever candidate for the office of prime minister with a "non-Anglo Celtic name," and Malaysian-born Penny Wong, Australia's first foreign minister to be born overseas, were sworn into office by Governor-General David Hurley before the pair flew to Tokyo for a security summit on Tuesday with Biden, Japanese Prime Minister Fumio Kishida and Indian Prime Minister Narendra Modi.

"We will return (from Japan) on Wednesday and set about implementing our agenda, our agenda that received the endorsement of the Australian people," Albanese said, highlighting items such as climate change, affordable child care and strengthening Medicare.

Biden rang Albanese to congratulate him on his election win and express the president's wish to make the countries' alliance stronger, the White House said.

Albanese described their conversation as "very fruitful and positive."

Morrison's decision to resign as prime minister during the early vote counting enabled Hurley, who represents Australia's head of state, British monarch Queen Elizabeth II, to appoint his replacement without evidence that Albanese can control a majority of seats in parliament's lower chamber where governments are formed.

Deputy Prime Minister Richard Marles was also sworn in and will act as prime minister while Albanese is in Japan. Katy Gallagher and Jim Chalmers were sworn into economic ministries.

Labor appears assured of 75 seats, one short of the majority in the 151-seat House of Representatives needed to form an administration. The conservative coalition was on track for 58, unaligned lawmakers 12 and six seats were too close to call, the Australian Electoral Commission said.

Albanese said he had the support of five unaligned lawmakers to back his administration if Labor falls short of a majority government.

A vote of no-confidence in Labor in the house could result in the unlikely outcome of the conservative Liberal Party cobbling together a minority administration. If no party was able to govern, another election would be held, an outcome that has never happened in the 121 years of Australia's federation.

"I'm hopeful that we will receive a majority of members of the House of Representatives. At this stage that looks most likely but of course counting continues," Albanese said. "But my expectation is that we have a majority."

Australia's two major parties, Labor and the Liberal Party, bled votes to independents and fringe parties in Saturday's election, continuing a trend of dissatisfaction with the political establishment.

Terri Butler, who would have been the new government's environment minister, was replaced by Max Chandler-Mather, of the climate-focused Greens party that now holds as least three seats in the house - two more than in the last parliament.

Former New South Wales state Premier Kristina Keneally's bid to move from the senate to the house in what was considered a safe Labor seat in Sydney was defeated by Vietnam-born independent candidate Dai Le, who became the first refugee ever elected to parliament.

Greens leader Adam Bandt supported a Labor minority government from 2010 until its election defeat in 2013 and was prepared to negotiate with Albanese again.

Albanese had been the government's chief negotiator with its outside supporters in the house during those three years and was praised for his collegial approach.

"The Greens and independents said we need to take action on coal and gas, which are the main causes of the climate crisis, and people agree," Bandt added, referring to Australia's major fossil fuel exports.

"It's the end of the two-party system as we know it," he said.

The teals want a more ambitious target than Labor's promise to reduce greenhouse gas emissions by 43% below the 2005 level by the end of the decade. The previous government had stuck with the same commitment they made at the Paris Agreement in 2015: 26%-28% below 2005 levels by 2030.