Australia on edge after close election 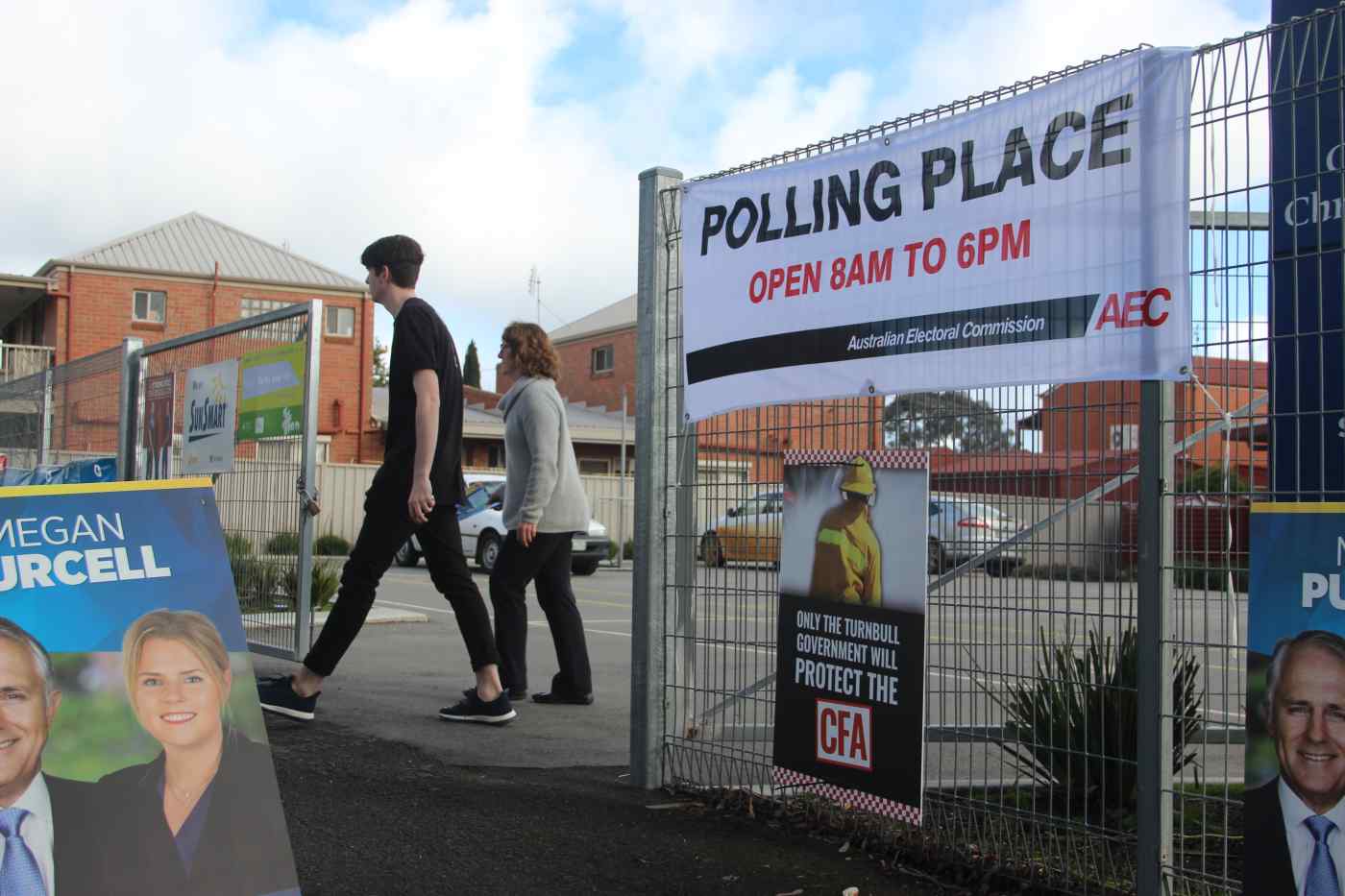 MELBOURNE/SYDNEY -- Australians were closely watching for results of their national election on Saturday night.

Counting in the eastern states suggested a swing toward the opposition Labor Party after polls closed at 6 p.m. Eastern Standard Time. But as voting continued in the country's west, results remained unclear, raising the prospect of a hung parliament in which no party would have an absolute majority.

By 11:45 p.m. Sydney time, Prime Minister Malcolm Turnbull had not arrived at a governing party post-election event held at a posh Sydney hotel. Former Liberal Party Prime Minister John Howard spoke to media at the event, saying he was disappointed at seat losses in the election, but said "it is for the prime minister to speak on behalf of the coalition" regarding the overall election outcome.

For much of the protracted, 55-day election campaign, Turnbull's Liberal-National party coalition -- which stormed to power at the 2013 election -- was tipped to enjoy a narrow victory. But a late surge of support for Labor in opinion polls in the final days gave opposition leader Bill Shorten, a former trade union boss, reason to be optimistic.

To form a government, either the Liberal-National coalition or Labor needed to win 76 out of 150 seats in the House of Representatives -- anything less would result in a hung parliament, which last occurred in 2010. The coalition won 90 seats in the 2013 election -- meaning it could lose up to 14 and still retain power -- while Labor has a huge task of wresting back at least 21 seats.

As a first-term government, the coalition expected a swing against it. Speaking several hours after voting ended in the east, Andrew Hughes, marketing lecturer at Australian National University, said that the outcome looked too close to call.

"The most significant aspect so far is a bigger than expected swing to Labor, though it looks unlikely to be enough to reach the magic 76 number," said Hughes, who specializes in political marketing. 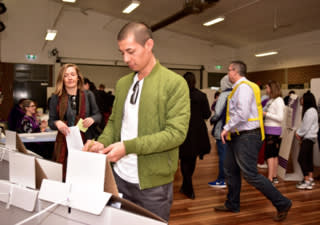 During a televised broadcast of the vote count shortly before 8:30 p.m., political commentator Barrie Cassidy said it was possible that neither party would be able to claim an outright majority.

"We will not know the outcome of this election tonight. We may not know it for some days to come," an optimistic and positive Shorten said at a party function in Melbourne. "There is one thing for sure: the Labor Party is back."

Polling stations across the country opened early in the day.

The states of Queensland and New South Wales -- location of Australia's biggest city, Sydney -- often determine where the election is won and lost. It was for this reason that Labor leader Shorten spent the morning touring marginal seats in Sydney before flying to Melbourne to cast his vote in his solidly Labor seat.

Turnbull meanwhile, followed by a crowd of journalists in Sydney, continued pushing the need for stable, "majority government" -- the coalition's key refrain throughout the campaign -- before he unexpectedly ditched the media later to embark on an unannounced tour of other electorates.

This was the first national election contested since the Senate voting system was overhauled earlier this year -- and reports across the country of long queues at polling stations suggested officials had a big task in explaining to voters how to fill out ballot papers.

Some minor disputes were reported at polling stations, including over campaign signage in seats in progressive inner Melbourne. But as usual in Australia, voting was a quiet, easygoing affair.

Many voters, in fact, were as interested as anything else in whether or not polling booths were selling barbecued sausages -- a tradition on election day. The hashtag "#democracysausage" trended on social media for most of the day.

Social media and commentary suggested that many Australians became disengaged with politics during the longest election campaign since 1969 -- and it showed in the mood of some voters waiting in line.

If Shorten leads Labor to victory, he would become the fifth prime minister in just over three years. Both main parties have emphasized the need for leadership stability -- something at the forefront of many voters' minds.

"I've found [the campaign] to be extraordinarily long," a voter who gave her name as "Emma" told the Nikkei Asian Review at a polling station in a marginal seat in the state of Victoria.

"I think people are now so used to politics being up in the air that they have kind of accepted that it [a change of leader midterm] could happen," she said. "That wouldn't have been the case 10 years ago.

"The most important thing is that we get a functional government -- regardless of who it comprises -- that they actually get [stuff] done."

Engaged in politics or not, Australians are required to vote and fines are enforced for those who fail to cast their ballot papers. Those who cannot make it to a polling station on election day can vote early. This year, an unprecedented 4 million chose to vote prior to the election, either at pre-polling stations or by post.

The issues that matter

Health, education, the economy and same-sex marriage were prominent issues in the election campaign. Labor is likely to have gained votes after hammering home claims that the coalition plans to dismantle Medicare, Australia's publicly-funded health care scheme. On the other side, a dispute in Victoria involving firefighters and the Labor state government looks to have gained the coalition extra support at national level.

From a regional perspective, foreign investment in Australian farmland has riled voters. With the election looming, the government in April blocked the sale of properties in Australia's biggest cattle station operation, S. Kidman & Co., to a Chinese-led consortium. The government has taken other steps to show it is cracking down on foreign sales -- while the opposition has announced it will encourage more foreign investors to buy land.

In April, the government awarded a $50 billion Australian dollar ($38 billion) contract to French shipbuilder DCNS. Japanese and German companies had also put in bids. As part of the contract, all 12 submarines will be built in Adelaide, the capital of South Australia, resulting in 1,100 new jobs and creating some 1,700 supply chain jobs.

The deal was seen as pivotal to the government's chances of maintaining support in South Australia. Amid this climate, Senator Nick Xenophon, a former independent, is leading a charge against the major parties with his newly founded party, the Nick Xenophon Team.

Some voters interviewed in Sydney indicated they felt Turnbull -- who only took office in September 2015 after ousting former Prime Minister Tony Abbott from the Liberal Party leadership -- needed more time. Eva, a health care professional, 30, said, "I still think [Turnbull's coalition] needs to be there a bit longer to be given a chance to prove themselves."

Commenting on the tenor of the campaign, she said that despite the long campaign, parties seemed more interested in attacking each other than informing voters. "It was more of a smear campaign than one informing citizens, especially in the last couple of days," she noted.

In the run-up to the elections, opinion surveys suggested that around 10% of voters were undecided up to the eve of the elections. For some, that indecision ran into election day. Michael Jun, a 19-year-student and a first-time voter in Strathfield, western Sydney, had not voted by lunchtime.

"I haven't decided who I will vote for yet. I think I will be going toward Labor, but...Neither side is that great," he said.

Although opinion polls suggested that smaller parties and independents could see unprecedented gains, some voters were sure it would end up as a two-horse race between the governing Liberal Party-led coalition and the Labor opposition.