MELBOURNE -- Australian Prime Minister Malcolm Turnbull has refused to be shaken by the loss of his government's parliamentary majority -- and his deputy prime minister -- after the country's highest court disqualified five politicians who were found to be dual citizens.

A confident Turnbull, leader of the conservative Liberal-National coalition government, has promised a business-as-usual approach to governance despite the setback. It comes ahead of important regional summits in Vietnam and the Philippines in mid-November, in which trade and national security issues will likely feature prominently in talks between Australian officials and their diplomatic and trade partners.

The High Court of Australia on Friday disqualified five members of its federal parliament -- four from the senate, or upper house, and Barnaby Joyce, the deputy prime minister and member of the house of representatives, the lower house. It follows a turbulent few months in Canberra as a series of politicians has revealed they were also citizens of another country. Australia's constitution disallows anyone with dual citizenship from being elected to federal parliament. The politicians in question -- including Joyce, who has since renounced his New Zealand citizenship -- say they were not aware they were citizens of other countries until recently.

The decision means the government has lost its parliamentary majority. It now occupies 75 out of 150 seats in the lower house, though Turnbull maintains that this changes little when it comes to passing legislation, once the votes of cross-benchers are included.

Loss of its parliamentary majority in and of itself does not spell the end for his government, which shed 14 seats but retained power at the last election, in July 2016. Former Labor Prime Minister Julia Gillard formed a government in 2010 after her party won just 72 out of 150 seats. Labor, now in opposition, was able to strike backroom deals that secured the support of minor parties. 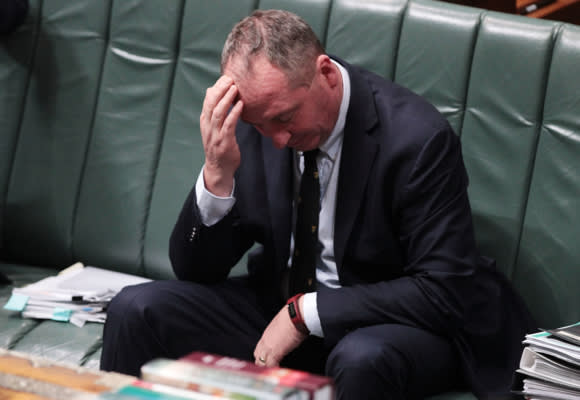 Australia has had four prime ministers and only two federal elections in the past four years -- a period of rare turbulence in the usually politically stable capital, Canberra. The disqualification of the dual citizenship politicians is the latest chapter in this run of messy politics.

Tanya Plibersek, a senior opposition parliamentarian from the Labor Party, described it as "extraordinary" that Joyce had continued serving as deputy prime minister while awaiting the High Court ruling, especially as he conceded afterward that it was the outcome he had expected.

"He's been making decisions as a minister -- all of those decisions are now perhaps subject to legal challenge," she said.

The government has some grounds to expect that it will emerge relatively unscathed. Joyce is favored to win back his seat at a by-election on December 2, though the government still faces an uncomfortable interim period as it relies more on the support of three minor party politicians and two independent members.

Some support for the government has come from these quarters, while other smaller party politicians are happy at the prospect of pressuring a vulnerable government into pursuing a royal commission into the behavior of Australia's big banks. Few, however, seem focused on forcing the government's hand when it comes to changing its approach to upcoming regional meetings about key issues such as national security and trade.

Among high-level upcoming talks is the Trans-Pacific Partnership summit, to be held in conjunction with the Asia-Pacific Economic Cooperation summit in Da Nang, Vietnam, on Nov. 11-12. The TPP summit is seen as crucial to the future of the trade agreement. At the APEC meeting, U.S. President Donald Trump, China's President Xi Jinping, Russia's President Vladimir Putin and other leaders will also be present.

In the same week, the Association of Southeast Asian Nations summit and the East Asia Summit will attract regional partners including Australia to Manila, in the Philippines. The meetings come at a time when Canberra has been called on to do more to respond to the Rohingya crisis in Myanmar and the declining political situation in Cambodia -- a country it has paid more than $40 million to take a handful of its unwanted refugees.

Friday's decision in Canberra appears to have come too late to throw much -- if anything -- off course. The next sitting of the lower house in Canberra is not until November 27 -- well after Australia delegations sit down with trade and diplomatic partners.