Backed by Democrats, Koike gets early jump on Abe

TOKYO -- Now it's a duel. Tokyo Gov. Yuriko Koike on Thursday picked up steam in her challenge to Prime Minister Shinzo Abe. Her newly established Party of Hope is set to swallow up a large numbers of candidates from the Democratic Party ahead of the general election set for Oct. 22, instantly assuming the DP's role as Japan's largest opposition force. It was DP leader Seiji Maehara's call to arms that led to the dramatic change in Japan's political landscape. "No matter what it takes, we must stop the Abe government," Maehara told a crowd of some 130 party members from both the upper and lower houses of the Diet, Japan's parliament. His announcement was a de facto merger of the DP with the Party of Hope. "We should choose substance over apperance," Maehara said, calling on his colleagues to join Koike's campaign as candidates of Party of Hope. No one disagreed, changing the entire dynamic of the election at a stroke. 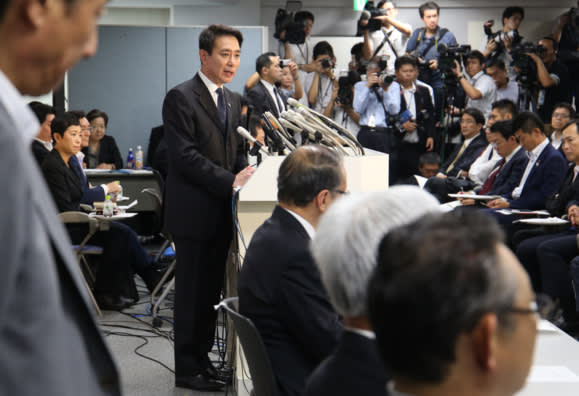 Seiji Maehara, leader of the Democratic Party, speaks at a meeting of party members from both houses of parliament after the dissolution of the lower house was announced in Tokyo on Thursday. (Photo by Ken Kobayashi)

Earlier in the day, Abe dissolved the lower house of the Diet and called a snap general election. It was carefully planned by the prime minister to give the opposition parties no time to prepare for battle.

The timing of the election forced Maehara to gamble, putting all his hopes on a change of government and the establishment of a stable two-party system, by sacrificing his own political grouping. At the party meeting, the DP decided not to field any candidates in the election. The 88 lower house DP members, if they wish to run, will be asked to leave their old party first and join Koike's team as candidates of Party of Hope.

With a large chunk of DP members expected to join, Koike is now in a position to challenge Abe. Tokyo Gov. Yuriko Koike said at a news conference on Thursday that DP members would have to state their intention to run as Party of Hope candidates before being accepted. (Photo by Ken Kobayashi)

At a news conference Thursday afternoon, Koike praised Maehara, saying he "has made a weighty decision." She did not even try to hide her ambition to take power. "We are not planning to fight this election only to become an opposition force," she said. "I intend to field as many candidates as possible." Before Thursday's dissolution, Koike's party had 11 seats in the lower house, while the DP had 88.

Of the total 465 seats in the Diet, Abe set the bar for victory at 233, the minimum needed for a majority for the ruling coalition comprising the Liberal Democratic Party and its junior partner, Komeito.

Koike's Party of Hope, even with the added ranks of DP candidates, is far short of that. And Koike stressed that her party will not take all DP candidates automatically. "We will select from those who want to run for the Party of Hope," she said, suggesting her party will not allow those who differ from her on key policies such as security to join.

In policy terms, Koike's party and Abe's share many similarities. But they are far apart on the proposed consumption tax hike and nuclear power. Two parties will now set their ideas before the voters and let them decide.