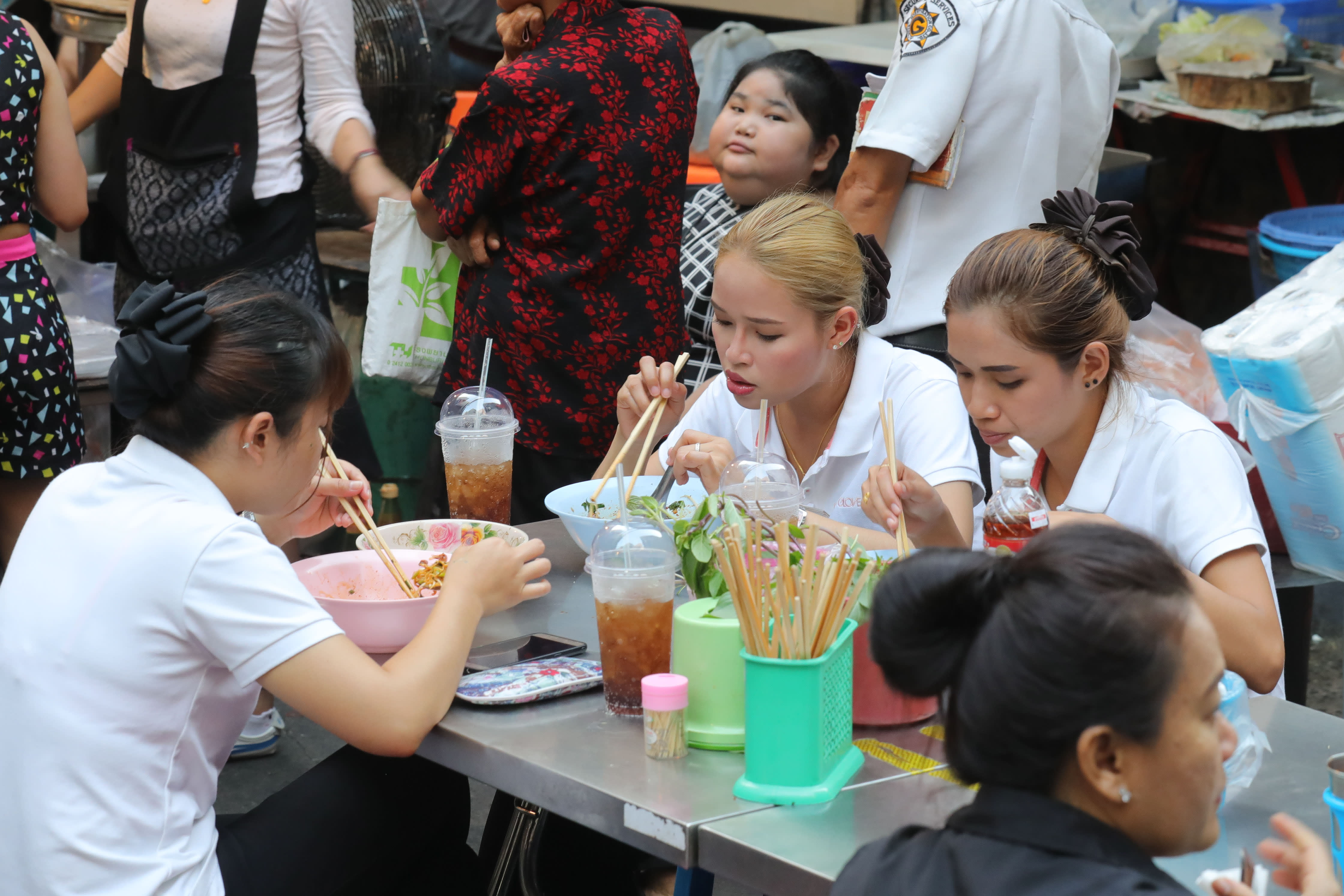 BANGKOK -- On a street off Silom Road, a business district by day and one of Bangkok's most vibrant entertainment spots by night, people form meandering queues at the many food stalls festooning the sidewalk. Huge vats of oil bubble away ready to receive freshly battered chicken, while steel cauldrons brimming with broth belch clouds of steam.

Wearing a crisp white shirt, Wanich Areeromna, 60, sits on a stool at one of the nearby metal tables and ladles a spoonful of each of the spicy, sweet and sour condiments in containers on the table into his seafood soup.

"This is Thai style," he said, gesturing toward the street. "You can speak loud, laugh, drink, smoke. You can eat here from evening to midnight; or even 24 hours." Wanich, who works for a bank and lives alone, said food from street vendors such as these is so cheap and abundant that he never bothers to cook at home. But this scene could soon be a distant, tasty memory due to the launch by Thailand's military government of a city-wide crackdown on roadside dining that has already seen thousands of stalls relocated or close.

This stall has been in this spot for 26 years. Nakin Sukhawat, 37, has been helping his mother run the soup cart for the last eight years. It nets him, his wife and mother 10,000 baht ($290) in profits every week.

Nakin said he was as stunned as everyone else about the government's move to push out street food vendors. "Customers are saying, 'why?' Everybody is saying 'why?'" he told the Nikkei Asian Review.

Bangkok is world famous for its cheap and tasty street food. For tourists the city's street stalls offer a mesmerizing cornucopia of exotic treats, classic curries and "pad Thai" fried rice noodles, as well as more challenging fare such as fried scorpion on a stick -- all prepared with surprising dexterity. For locals, it is a vital source of daily sustenance in an increasingly costly city. Nakin Sukhawat has worked at this streetfood stall started by his mother 26 years ago for the last 8 years. (Photo by Ken Kobayashi)

But in the eyes of the military government, street sellers of food, drink and other items have blighted the capital and congested its walkways.

Wanlop Suwandee, chief adviser to Bangkok's governor, told the Nikkei Asian Review that the government wants to bring order to streets that have become chaotic by moving or relocating all vendors from prime locations, such as Silom and Sukhumvit roads. Some areas have already been cleared, with an estimated 10,000 sellers in total expected to be moved to locations further out, he said.

Wanlop said that, contrary to media reports that Bangkok's main backpacker hubs Khao San Road and Yaowarat, or Chinatown, were next to be cleared, the street food scene in those areas will in fact be "preserved" or "intensified" in the spirit of the CNN rankings, with a street food festival to be held in Bangkok in June.

However, observers remain skeptical, and some critics note that the government's policy seems largely confused or even counterintuitive in the face of slumping domestic demand and a tourism industry facing stiff regional competition.

Erez Chason, owner of local company Tour East Asia, said small independent retailers had been hit hard by declining numbers of Western tourists, who tended to patronize such businesses more than did their Chinese counterparts.

The "culture and color that street food brings to the street" would evaporate with the crackdown, with locals losing out the most, she said. 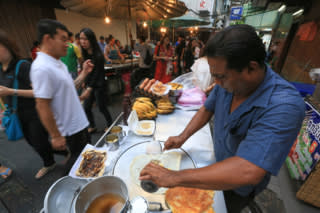 A man whips up a sweet buttery roti filled with egg, banana and topped with sweet milk, costing 50 baht, on a sidestreet off Bangkok's Silom Road. (Photo by Ken Kobayashi)

A 49-year-old Thai woman working in a restaurant near Silom's Patpong market said many Thais share the military's sentiment that the streets have become too frenetic, but sweeping away sellers is not the way to go, she warned.

"If there is no street food, poor people will die," she said. "They cannot afford to go to the supermarkets. So what can they do?"

Fit for a king

Analysts say the government crackdown is more than just an attempt to make Bangkok look cleaner and points to an obsession among Thailand's military governments with giving an impression of order and control.

Referencing the military regimes of the 1950s and 1960s, Pavin Chachavalpongpun, associate professor at Kyoto University's Center for Southeast Asian Studies, said today's government was imposing the "orderliness and cleanliness" that defined the rule of those periods.

He added that the current clean-up reflected a desire to change the image of Thailand under the reign of King Maha Vajiralongkorn, who ascended the throne late last year after his father Bhumibol Adulyadej died in October.

The military wants to show that "under a new reign, Thailand will be reinvented; this would not be Thailand as you have seen in the past: messy, dirty, you can do whatever you like, cheap food for tourists. No. This would be an upmarket Thailand," Pavin said. Food stalls like this one are being swept out of Bangkok's prime spots by local authorities. (Photo by Ken Kobayashi)

This year will be a momentous one for Thailand as it prepares to hold a series of important royal events: the late king will be cremated in October over a five-day period and the new king's formal coronation will follow soon after.

"The sweeping away of street vendors in 2017 undoubtedly owes to a junta desire to create cleanliness for the crown in a year of royal cremation followed by coronation," Paul Chambers, a lecturer on international affairs at Naresuan University, told the Nikkei Asian Review.

Adviser to the city's governor Wanlop vehemently denied any link between the crackdown and the royal events, saying "there's no connection at all," and stressed that the clean-up was merely the city's "responsibility."

However well intended, the plan to rein in the sprawling informal economy is -- whether unwittingly or deliberately -- being clumsily executed, with no consideration for the livelihoods of poor people, said Kan Yuenyong, executive director of the Siam Intelligence Unit, a private think tank.

Back in Silom, soup seller Nakin takes a break from serving customers to eat his own dinner. His 14-hour working day is coming to an end. He has no idea what he will do if he is forced to move, but he is holding little hope that the military government has something better in store for him.