DHAKA -- The Bangladeshi government is turning its focus to Facebook, Twitter and other global social media platforms as it broadens efforts to quell critical reports.

The latest moves to keep an eye on public statements come three years after the government came down hard on TV stations and publications to stymie critical reporting.

It is planning a law that would require social media platforms to store domestically generated user data on servers within the country. The law would also force the tech companies to provide information about social media accounts that the government deems to be spreading propaganda or false information.

It is the next salvo in a series of endeavors to rein in Big Tech. In 2019, Dhaka introduced the amended Value Added Tax and Supplementary Duty Act, compelling international technology companies to make VAT payments.

Facebook made its first direct VAT payment to the National Board of Revenue in July. Google and Amazon followed suit in August. Revenue board officials expect payments from other tech companies soon.

The value-added tax is a 15% charge on all sales proceeds. Facebook makes money in Bangladesh by selling advertisements to multinational and Bangladeshi companies, while Microsoft, Google, Amazon and other tech companies sell a total of nearly $500 million worth of products and services in Bangladesh.

With the VAT, "revenue earning is our main goal," said Masud Sadiq, a member of the National Board of Revenue, "but also there should be traceability ... which entity is providing what kinds of services or selling which goods?"

A Facebook representative told Nikkei that the U.S. company will "work closely" with policymakers for "fulfilling our tax obligations in Bangladesh."

But freedom of speech remains an issue.

The government under incumbent Prime Minister Sheikh Hasina in 2018 passed the Digital Security Act to "contain cybercrime," ignoring the misgivings of journalists, human rights advocates and other parties. The act allows law enforcement agencies to arrest people without a court warrant if a case of spreading "false" information is logged. It also allows for prison terms of up to five years or fines of up to 1 million taka ($11,700), or both. 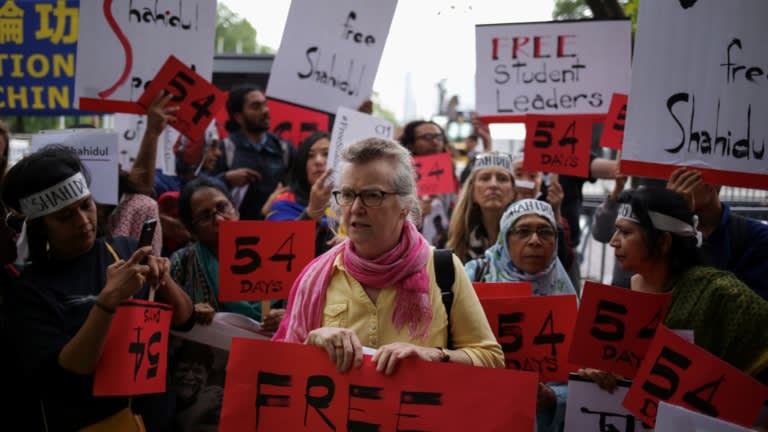 Journalists and activists protest the arrest of Bangladeshi photojournalist Shahidul Alam as Prime Minister Sheikh Hasina attends the General Assembly of the United Nations in New York in September 2018.   © Reuters

In 2020, the government requested that Facebook give it account details of 897 users; the social media giant responded to 44% of the requests. In 2019, the government sought user information on 421 accounts.

With the new law requiring social media platforms to store data domestically, the government intends to compel the service providers to hand over any piece of user or account information the government deems necessary.

"Social media users always worry whether their posts hurt any influential quarter or go against government sentiment," said Qadruddin Shishir, a Facebook user and fact-checker for an international news agency.

He said the existing Digital Security Act has already gagged free speech and enactment of the new law will exacerbate matters by putting social media users more at risk of government repression.

"We need to think several times before writing anything in social media, fearing prosecution," said Ashraful Islam, another Facebook user in Dhaka.

Bangladesh is not alone in tightening social media controls. Neighboring India and other nations are struggling to contend with the spread of disinformation across user-generated media platforms.

In India, Prime Minister Narendra Modi's government enacted a law early this year that allows it to censor social media content. In response, WhatsApp, a Facebook-owned chat app operator, filed a court complaint seeking safeguards from being compelled to undo user privacy protections. The proceedings are in the hearing stage.

Iftekharuzzaman, executive director at Transparency International Bangladesh, said social media platforms are, like many other international entities, doing business in Bangladesh and as such should be subject to regulation.

But, Iftekharuzzaman added, regulations should not stifle people's freedom of expression or impede their right to obtain information via social media. "We cannot," he said, "cut off our head to cure a headache."