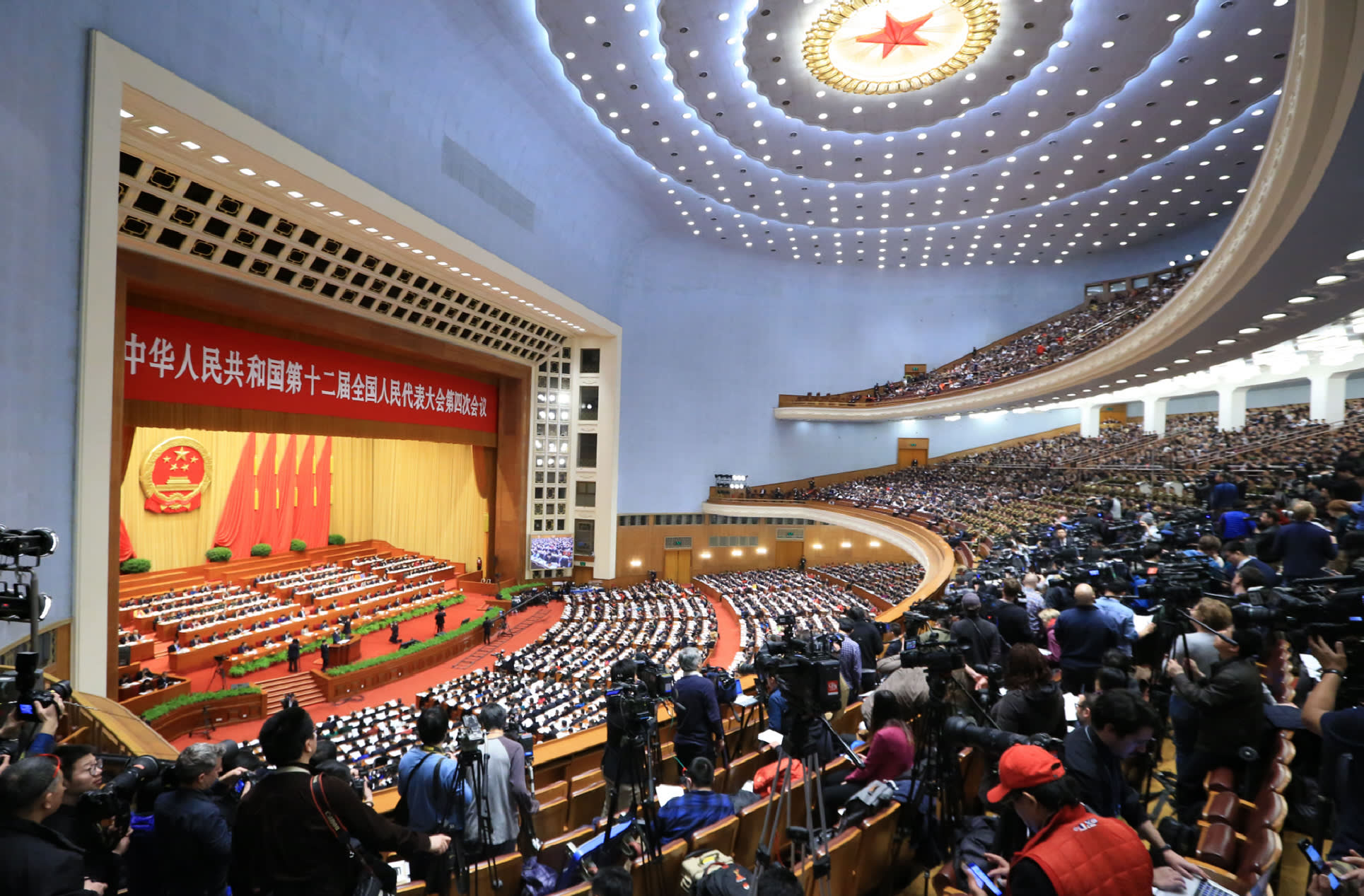 Delegates fill the Great Hall of the People at the opening session of the National People's Congress in Beijing on March 5. (Photo by Akira Kodaka)
KEN MORIYASU, Nikkei staff writerMarch 10, 2016 12:00 JST | China
CopyCopied

BEIJING -- On the morning of March 4, as the Chinese capital stirred to life under hazy white skies, senior government official Wang Min sat down to eat breakfast at the Asia Hotel in the center of town along with fellow members of his delegation from Liaoning Province. They were there to attend the annual meeting of the country's parliament, the National People's Congress, which was set to kick off the next day.

Although Wang had moved on from his position as the top Communist Party official in the northeastern rust-belt province and was now working in a senior parliamentary position in Beijing, he still represented Liaoning to parliament.

At 8:30 a.m., Wang had finished his meal and was relaxing with a cup of green tea. It was the last time he was seen in public. 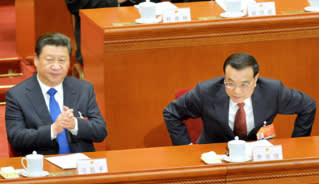 Two hours later, the official Xinhua News Agency released a brief statement saying Wang was being investigated "on suspicion of serious violation of discipline" by the Communist Party Central Commission for Discipline Inspection, the formidable CCDI.

The bewilderment within the delegation was still visible two days later, when the Liaoning team met at the same hotel for a scheduled session to discuss policies for 2016.

Until pressed by journalists, Liaoning officials were hesitant to hand out a list of the meeting's participants. On the list, along with four other "Wangs," was "Wang Min, male, member of the Central Committee of the Communist Party, vice chairman of the National People's Congress Committee for education, science, culture and public health."

To the more than 5,000 politicians who descended on the capital for the most important two weeks of the political calendar, Wang's sudden absence was a stark reminder that President Xi Jinping's anti-corruption campaign is alive and kicking, and anybody can be the next target.

Xi and his powerful ally, top graft-buster Wang Qishan, have led a drive that has so far detained 105 high-ranking officials and has punished hundreds of thousands of others.

The news of Wang's investigation may have been especially shocking for the party's No. 2 official, Premier Li Keqiang. Li himself was party secretary of Liaoning before joining the nation's top leadership in 2007. He is known to have personally phoned Wang many times to give instructions about economic development.

Liaoning and the northeast was very much the home turf of Li and his Communist Youth League faction. But when Wang moved to Beijing last year, Xi filled his former position with one of his own loyalists, Li Xi, the former No. 2 man in Shanghai.

On March 5, one day after Wang was detained, Premier Li took the stage at the Great Hall of the People to deliver this year's Government Work Report. The international scrutiny was intense: With the global economy reeling from China's slowdown, this year's gathering of the National People's Congress may be under the spotlight more than ever.

Not a single word of the Government Work Report will be altered during the 12-day session; it is very much a rubber-stamp parliament. Still, pension funds, sovereign wealth funds, corporate managers and retail investors around the world are desperately trying to read between the lines and dissect the partyspeak.

China is tasked with striking a balance between drawing a better road map to tomorrow and preventing today's economy from slowing too fast. As Li put it: "Pursuing development is like sailing against the current. You either forge ahead or drift downstream."

The figures the premier laid out indicate already-strong headwinds. Li said China will create "at least 10 million new urban jobs" this year. Xiao Minjie, a senior economist at SMBC Nikko Securities, said he was surprised at the feeble target. "There will be 7.65 million new college graduates and around the same number of high school and middle school graduates looking for jobs," he said. "That's 15 million already."

On top of that, China is set to eliminate "zombie companies," loss-making, mainly state-owned enterprises kept afloat by government support. Some 5 million to 6 million jobs could be lost in the process. Li's goal of 10 million new jobs suggests a lack of confidence in the economy.

In the past, when China's gross domestic product was soaring, job creation practically took care of itself. In a recent China Daily piece, Liu Xiaoming, China's ambassador to the U.K., said, "Of course, China's growth rate [during the recent slowdown] could easily have exceeded 7% if the energy- and pollution-intensive industries had been given free rein, or if massive stimulus measures had been applied."

But China cannot continue to do that; it needs to lose some extra flab. It "won't be without its discomforts or pain," the ambassador said. "But just as perseverance will see one through a diet -- to less fat, stronger muscles and a healthier body -- so it is with the Chinese economy."

Taking on the zombies

The Government Work Report contained its share of health-conscious main dishes but also plenty of deep-fried appetizers. The former includes innovation-driven development and measures to ensure Chinese cities have blue skies 80% of the year. The latter includes promises to invest 800 billion yuan ($122 billion) in new railways and 1.65 trillion yuan in road construction.

The real test is whether Li can put zombie companies "under the knife," as he said he would in December. On the reform of state-owned enterprises, the premier said, "Some will be developed through innovation, others will be reorganized or merged, and still others will exit the market."

One way China hopes to rise to the challenge, Li said, is by experimenting with an open selection process in choosing executives, recruiting professional managers from the outside and paying them internationally competitive salaries.

"This is hardly enough," said Kunihiko Miyake, research director at the Canon Institute for Global Studies. "Bringing in a bunch of outside professionals is not going to change the Chinese economy. They have to start privatizing these state-owned enterprises."

The government gave no explanation of how former Liaoning chief Wang had "violated discipline," but it may have something to do with the issue of state companies. Wang was central in forming policies in the northeast, where he worked for more than a decade, including a stint as party secretary in Jilin Province.

Evan Medeiros, managing director for Washington-based research company Eurasia Group and former senior director for Asian affairs at the White House's National Security Council, said: "Either there is a corruption issue or he was opposing some key reforms -- or both. It is clearly meant to send a signal."

On Feb. 28, ahead of the parliamentary gathering, the Communist Party announced a new round of probes targeting 32 government agencies, including the Ministry of Industry and Information Technology and the State-owned Assets Supervision and Administration Commission of the State Council.

Investigators will also return to four provinces -- Liaoning, Anhui, Shandong and Hunan -- to check whether any stones were left unturned in earlier probes. "We will revisit places we have inspected before to check if the issues have been resolved, and to see if there are new issues to handle," Huang Shuxian, the deputy secretary of the party's discipline commission, told the press as he was walking into the Great Hall of the People on March 3.

A recent report by the Eurasia Group noted that: "These four provinces are probably being inspected again in conjunction with the Xi administration's drive to reduce industrial overcapacity. Shandong and Liaoning are major players in overcapacity industries, including iron and steel, aluminum, cement, flat glass and shipbuilding."

The Eurasia Group report also pointed out that "Xi is probably using the [anti-corruption] campaign this year to a greater extent than in the past to marginalize adversaries and promote allies ahead of the 19th Party Congress next fall."

That event, which happens every five years, will include a reshuffling of the top leadership. Five of the current seven members of the Politburo Standing Committee are set to retire. In the coming weeks and months, Beijing will be rife with factions vying to secure those open seats.

Although his position is safe from an age standpoint, Li himself could also be sailing against the current. Rumors are echoing through the chambers of the Great Hall of the People that the president may be thinking of replacing his premier. Li faces a conundrum: how to build a healthy, muscular economy on a diet of deep-fried appetizers and chocolate. And he has about 20 months to show that the workout regimen is succeeding.